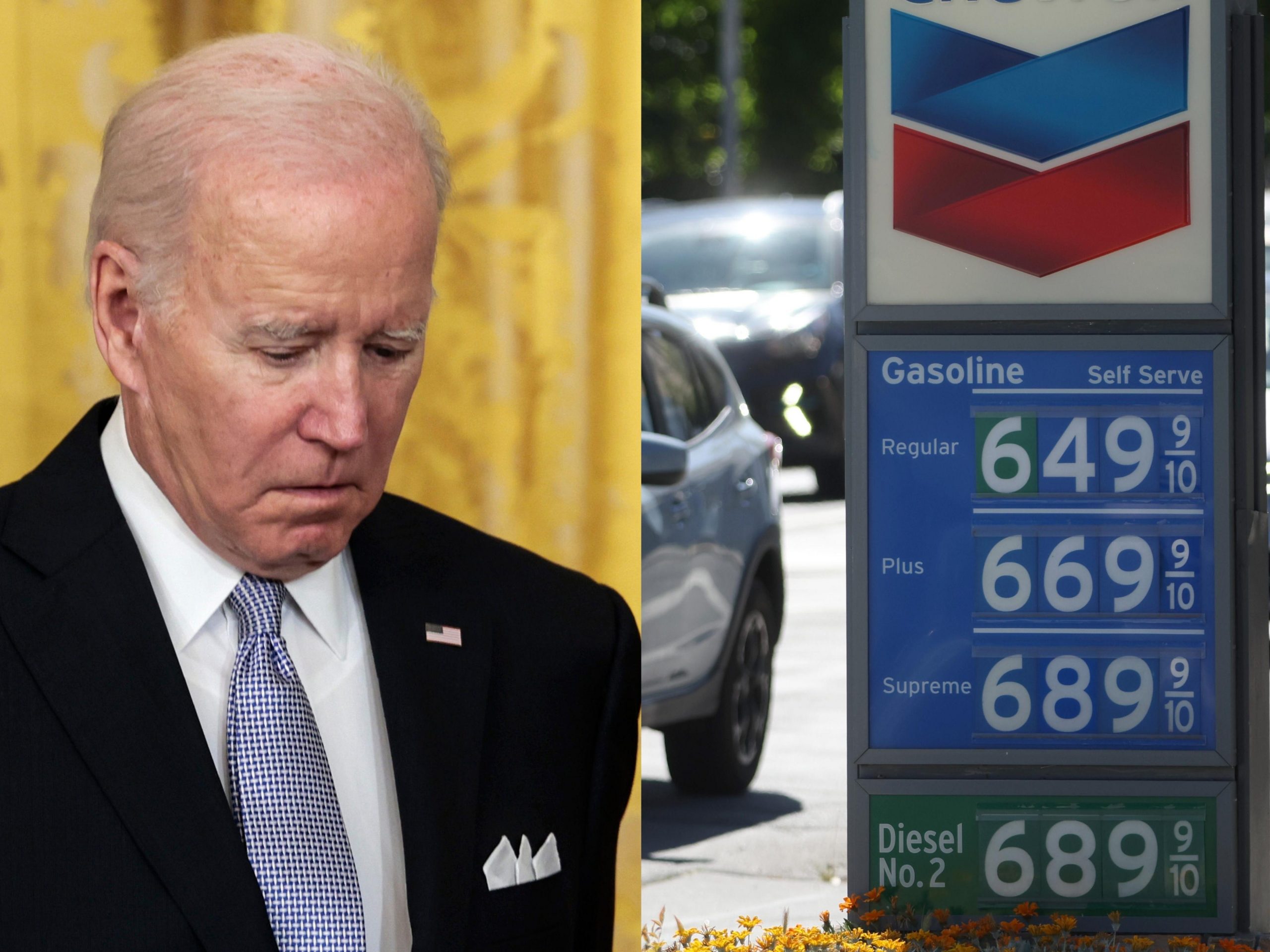 President Biden; gas prices in San Francisco, California on May 20, 2022.

Over the 4th of July holiday weekend, some of the most powerful people in the world got into a Twitter fight over the high price of gas. The interaction, which was covered in the media in terms of who dunked on whom, actually reveals a lot about the conversation around who gets what and why in the American economy.

It started when President Biden tweeted a message to Big Oil producers and distributors: “Bring down the price you are charging at the pump to reflect the cost you’re paying for the product. And do it now,” he wrote. Crude oil prices this week have dropped to their lowest point in months, hitting about $98 per barrel on Tuesday, just $5 over the barrel price before Russia’s invasion of Ukraine in February sent global gas prices skyrocketing. But the national average price for a gallon of gas on February 7th before the invasion was $3.44 a gallon, while at the time of this writing the national average price for a gallon of gas was still stuck at $4.72.

Biden’s tweet drew swift criticism from Amazon founder Jeff Bezos, the second-richest man in the world, who tweeted that Biden’s claim was “either straight ahead misdirection or a deep misunderstanding of basic market dynamics.”

A reply from the US Oil & Gas Association, a trade organization representing American oil companies, was more scathing: “Working on it Mr. President,” the organization tweeted, adding, “In the meantime — have a Happy 4th and please make sure the WH intern who posted this tweet registers for Econ 101 for the fall semester…” The US Oil & Gas Association failed to elaborate on how they’re “working on” lowering prices.

Media outlets covered the exchange like it was a boxing match, with splashy, attention-getting, overused verbs like “roast,” “trolled” and “slams” in the headlines. But if you look behind the posturing, you’ll notice that both Bezos and the industry organization framed their putdowns of Biden’s tweet similarly: Bezos argued that high prices are a result of “basic market dynamics,” in which the free market sets the price, and the US Oil & Gas Association’s tweet implied that any Econ 101 student could understand that high prices are beyond the control of the companies setting the prices.

We often see politicians and wealthy people use “simple market forces” that anyone in “Econ 101” could understand as the reasoning for economic policies — like lower wages and corporate tax cuts — that benefit the wealthy at the expense of everyone else. But a growing body of evidence shows that tax cuts for wealthy people and corporations are bad for economic growth, and that raising the minimum wage has positive impacts for everyone. The market isn’t some all-powerful invisible hand that establishes prices, profits, and wages. CEOs, executives, and wealthy investors make those decisions — and those decisions typically benefit them at the expense of everyone else.

In this week’s episode of Pitchfork Economics, host Nick Hanauer explained that American corporate profits have spiked from 5 or 6% of GDP to just over 12 percent in the last year or so, nearing an all-time record. “That increase in corporate profits is not because it has to be, or needs to be, or should be. It’s because powerful people prefer it that way,” Hanauer said.

Bezos has mocked Biden’s recent suggestions that corporate greed, and not simple market forces, are responsible for higher prices. But a March survey of oil and gas executives from the Federal Reserve Bank of Dallas found that nearly 60% of respondents blamed “investor pressure to maintain capital discipline” as a reason why they weren’t drilling for more oil in order to increase supply and drive prices down. In other words, Wall Street loves the record profits that are the result of high gas and oil prices, and Big Oil doesn’t want to let Wall Street down — or slash their own extravagant bonuses — by taking any action to lower those prices.

So when you see wealthy people and corporations dunking on politicians to popular acclaim, it’s important to keep in mind who benefits from the policies being discussed. If the “market forces” we’re told are taught in “Econ 101” benefit the organizations making billions of dollars in profits while everyone else pays more to go on vacation or commute to work, chances are pretty good that’s not an immutable law in action — it’s just plain greed.

But if Biden expects Big Oil executives to feel shame and lower prices out of the kindness of their hearts, he’s going to be waiting for a very long time. Leaders need to take action to penalize price-gouging and corporate profiteering with smart policy. Congress is considering a bill that would tax Big Oil’s extraordinary profits and return that revenue to ordinary Americans in the form of quarterly checks. And California Governor Gavin Newsom recently signed legislation to send some 23 million Californians inflation-relief checks of up to $1050 to undercut some of the sting of high prices.

Whatever policy solution you prefer, it should be clear by now that simply tweeting about the problem won’t make it go away. It should also be clear that when powerful people invoke the free market as an excuse for high prices, they don’t necessarily have the best interests of most Americans at heart.