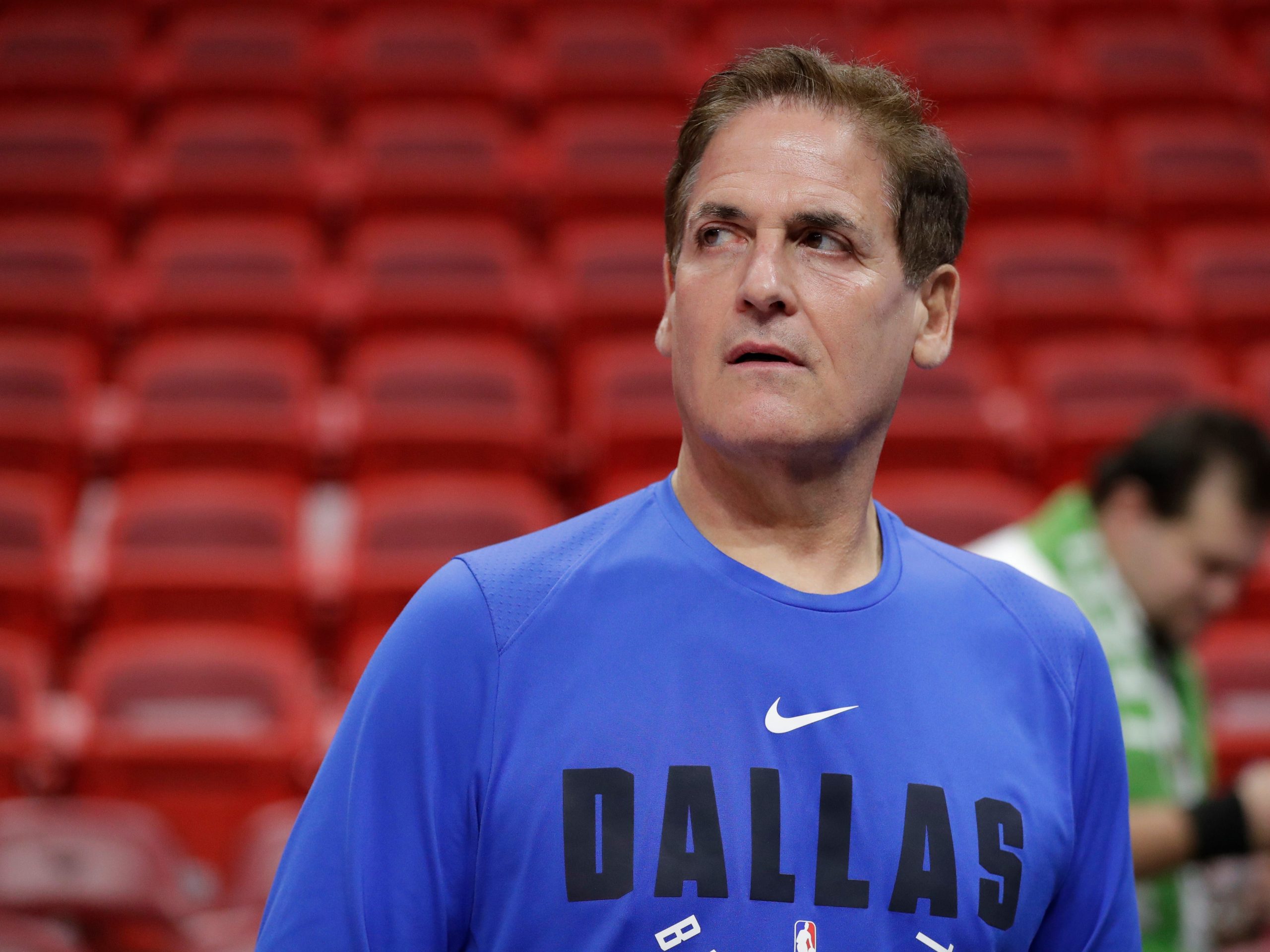 Dallas Mavericks owner Mark Cuban watches players warm up before the start of an NBA basketball game against the Miami Heat, Friday, Feb. 28, 2020, in Miami.

The teen who famously turned down a $5,000 offer to stop tracking Elon Musk’s private jet said he stopped sharing data on Mark Cuban’s travel history on Twitter after the billionaire reached out with privacy concerns.

Over the course of about four months, Cuban and 19-year-old Jack Sweeney went back and forth over the account @MCubansJets, which followed several of the “Shark Tank” star’s planes.

“Are you not concerned about safety issues with tracking jets?” Cuban asked Sweeney in an initial reach-out over Twitter in February that was shared with Insider.

“Not everyone on this platform is stable. Many can be irrational and dangerous,” Cuban said in a message to Sweeney. “You tell me what you want so that I can end this risk to my family’s safety,” he added.

Cuban confirmed to Insider that the messages were genuine. He told Insider that he initially reported the account on Twitter for impersonation, but it was only taken down for a handful of weeks. Sweeney told Insider he doesn’t think the accounts pose a major security issue as the data is already available online via public air traffic-tracking sites like the ADS-B Exchange. He merely puts the data on Twitter via bots that scrape the websites.

“I’m open to taking down some of the accounts, but I’m not going to do it for nothing,” Sweeney told Insider.

Over the past few months, the teen has begun tracking a wide range of aircrafts from stars like Tom Cruise and Taylor Swift to political and tech figures like former President Donald Trump or Meta CEO Mark Zuckerberg. Sweeney said that the accounts took some work to set up initially, but now he can put them together in about 15 minutes.

Sweeney appeared to agree to disable @MCubansJets in the spring after Cuban offered to give him future support on business endeavors. The account, which has nearly 3,000 followers, has not been deleted. Though, it has not shared Cuban’s travel data since April 7. Sweeney told Insider he’s no longer sharing the data to Twitter, but is still tracking the billionaire on his Discord.

“By ending this you have me as a friend for life,” Cuban said to Sweeney in the DM exchange. “You probably have Elon as a friend for life and I’m guessing that is far more valuable to you than the value of a Tesla. Some day you may start a business and you would have my help.”

Cuban gave Sweeney his public email in exchange, but the teen told Insider he felt disappointed by the offer. He followed up with a request to meet Cuban at a Dallas Maverick’s game — the team that the billionaire bought in 2000 for about $280 million, but Cuban appeared to not respond. “He said a lot of stuff to try and get me to take it down, but he didn’t really put in the effort,” Sweeney said.

The billionaire appeared unaware that the Twitter account had stopped sharing his flight data, but said he will stand by his promise and will not take any further action against Sweeney, if he truly stops tracking his travel.

“That’s the deal I made, I will answer his business questions,” Cuban said.

Earlier this year, Sweeney asked Musk for $50,000 or a Tesla in exchange for taking down the account that tracks his jets after the billionaire said he “didn’t love the idea of getting shot by a nutcase.” Musk blocked Sweeney on Twitter shortly after he made the counter offer.

Sweeney said since his efforts to track Musk catapulted him into the spotlight the public response to his work has been mixed. He said he’s gotten threats from Musk fans, but some of the people he tracks, like billionaire Jared Isaacman, appear unbothered by the attention.