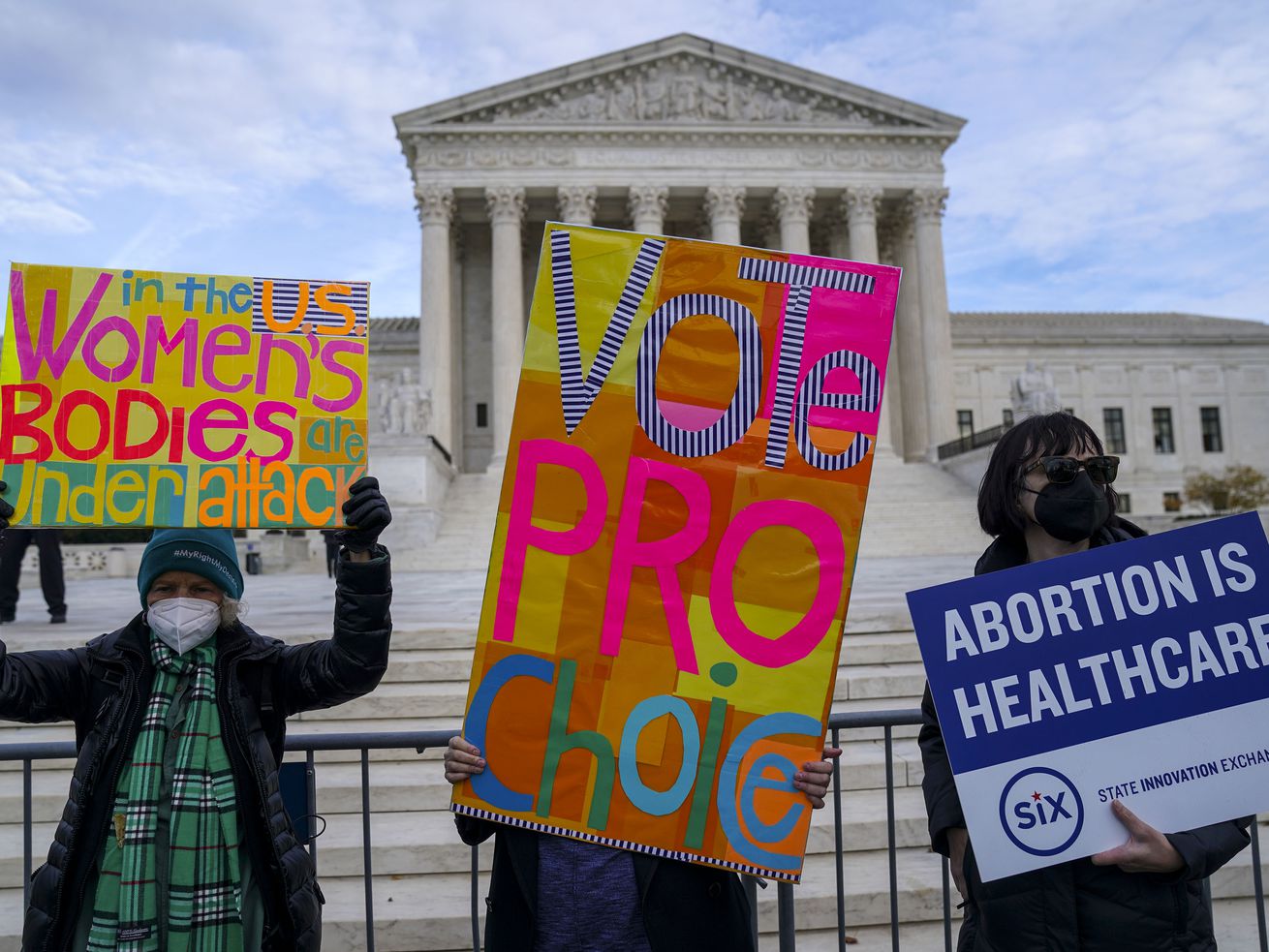 Protesters hold signs in front of the US Supreme Court during the “Hold The Line For Abortion Justice” Women’s March on December 1, 2021 . | Leigh Vogel/Getty Images for Women’s March Inc

By all outward signs, Roe v. Wade is on its deathbed. In December, the Supreme Court effectively insulated a Texas law that bans abortions after the sixth week of pregnancy from judicial review. Then, at oral arguments in Dobbs v. Jackson Women’s Health Organization, a majority of the justices appeared eager to drastically roll back abortion rights — and perhaps even to overrule Roe explicitly. A decision in Dobbs is expected by late June.

That leaves the right to an abortion in limbo. Technically, decisions like Roe and Planned Parenthood v. Casey (1992), which weakened Roe somewhat but retained core protections for abortion, remain good law. And many state anti-abortion laws are currently blocked by court orders that rely on Roe and Casey.

But those court orders are unlikely to survive the year and could very well all be lifted this summer, in the likely event that Dobbs overrules or drastically curtails Roe and Casey.

Arizona’s Republican Attorney General Mark Brnovich, however, apparently doesn’t have the patience to let this process play out. In early December, Brnovich asked the Court to immediately reinstate an enjoined state law restricting certain abortions. That law would prohibit abortion providers from performing an abortion if the provider knows that “the abortion is sought solely because of a genetic abnormality of the child” — although it does include an exception if the fetus has a condition that will prove fatal within three months of birth.

The case is Brnovich v. Isaacson, and it remains pending before the justices.

Though one conservative appeals court did uphold a similar Ohio law, most courts to consider laws banning abortions if the state disagrees with the reason for the abortion have been blocked by lower courts, and there is a very strong argument that these laws violate Casey. A Supreme Court decision reinstating the Arizona law, in other words, would be another loud signal from the justices that Casey is in its final days.

Just as significantly, if Brnovich succeeds in his bid to reinstate Arizona’s law, he’s likely to open the floodgates to other Republican officials who wish to reinstate other anti-abortion laws.

A decision reinstating the Arizona law would be an announcement that the Supreme Court is open to similar requests to lift existing court orders protecting the right to an abortion. And it would send a clear signal to anti-abortion judges in the lower courts that they are free to start lifting such court orders as well.

According to the Guttmacher Institute, state lawmakers enacted 108 abortion restrictions in 2021 alone. Eight states still retain abortion bans from before 1973, when Roe was handed down, and several others have laws on the books that effectively ban all or most abortions. So, if the courts start allowing these sorts of laws to take effect, the impact on abortion rights could be swift and profound.

Given that a decision in Dobbs is at most months away, the long-term impact of an anti-abortion ruling in Isaacson is likely to be minimal. Once Roe is overruled or gutted completely, the process of unwinding court orders blocking anti-abortion laws will happen anyway. But, at the very least, the Isaacson case could have a profound impact on anyone seeking an abortion in the first half of 2022.

Arizona’s law is unconstitutional under Casey

There are several very strong arguments that the Arizona law is unconstitutional under existing precedents.

First of all, Casey held that “a State may not prohibit any woman from making the ultimate decision to terminate her pregnancy before viability,” where “viability” refers to the moment when a fetus is capable of living outside the womb.

As the United States Court of Appeals for the Seventh Circuit noted in an opinion striking down an Indiana law that is similar to Arizona’s, “Casey’s holding that a woman has the right to terminate her pregnancy prior to viability is categorical.” Casey says that the state may not prohibit “any woman” from terminating a pregnancy prior to viability. That includes people who wish to terminate their pregnancy for reasons that the state disapproves of.

For what it’s worth, the Sixth Circuit, which is the only circuit to uphold an Arizona-style law, rejected the Seventh Circuit’s reasoning on the theory that these kinds of laws do not actually prohibit anyone from getting an abortion. Recall that Arizona’s law only prohibits providers from performing an abortion if they know that their patient is doing so for an impermissible reason. The Sixth Circuit claimed that this requirement that a doctor know their patient’s motive places such laws outside of Casey’s categorical rule because a patient could still obtain an abortion from a doctor who is ignorant of the patient’s motives.

But even if a judge accepts such sophistry, Arizona’s law runs into a second problem. Casey doesn’t just prohibit pre-viability abortion bans, it also prohibits any abortion law that “has the purpose or effect of placing a substantial obstacle in the path of a woman seeking an abortion of a nonviable fetus.” It’s hard to imagine a legitimate purpose — that is, a purpose other than placing obstacles in front of people seeking abortions — to a law that permits abortions, but only if the doctor doesn’t know too much about their patient.

The district court that struck down Arizona’s law also gave a third reason why it is unconstitutional. As the Supreme Court held in United States v. Davis (2019), excessively vague laws may be struck down if they fail to “give ordinary people fair warning about what the law demands of them.” And the district court pointed to several provisions of the Arizona law which, it concluded, do not clear this bar. For example, the law “does not offer workable guidance about which fetal conditions” qualify as a “genetic abnormality.”

A decision reinstating the Arizona law would embolden opponents of abortion

In any event, the fact that the Sixth Circuit disagrees with several of its fellow circuits about whether Arizona-style laws are constitutional is a good reason for the Supreme Court to hear the Isaacson case eventually. The justices often hear cases where two or more federal appeals courts have reached different answers to the same legal question, as the whole purpose of having a single Supreme Court at the apex of the judiciary is to ensure that federal law is uniform throughout the country.

But Isaacson arrives at the Supreme Court on the Court’s “shadow docket,” a mix of emergency motions and other matters that are typically decided on a short timeframe and without full briefing or oral argument. Arizona’s attorney general, in other words, hopes to bypass the ordinary process for seeking review of a lower court decision — a process that typically takes months or longer — and obtain a Supreme Court decision reinstating Arizona’s law as soon as possible.

If Brnovich can step outside the Court’s normal procedures to obtain such an order, other Republican officials will think they can do so as well. And many lower court judges will likely view such an order as a sign that they should start reinstating anti-abortion laws that were previously struck down.

Thus, in practice, the Isaacson decision could wind up accelerating the demise of Roe, triggering a wave of decisions gutting abortion rights months before Dobbs is handed down.

Indeed, there is a precedent, of sorts, for the Supreme Court gradually rolling out a major change in its understanding of the Constitution rather than implementing that change abruptly with one definitive decision.

There are obvious differences between Obergefell and Dobbs — the former was an expansion of individual rights, while Dobbs is likely to end in a significant contraction of such rights — but the lead-up to Obergefell shows that the Court will sometimes implement a new constitutional rule on a piecemeal basis before implementing it nationwide. That process may already be underway as the Court drafts its Dobbs decision.