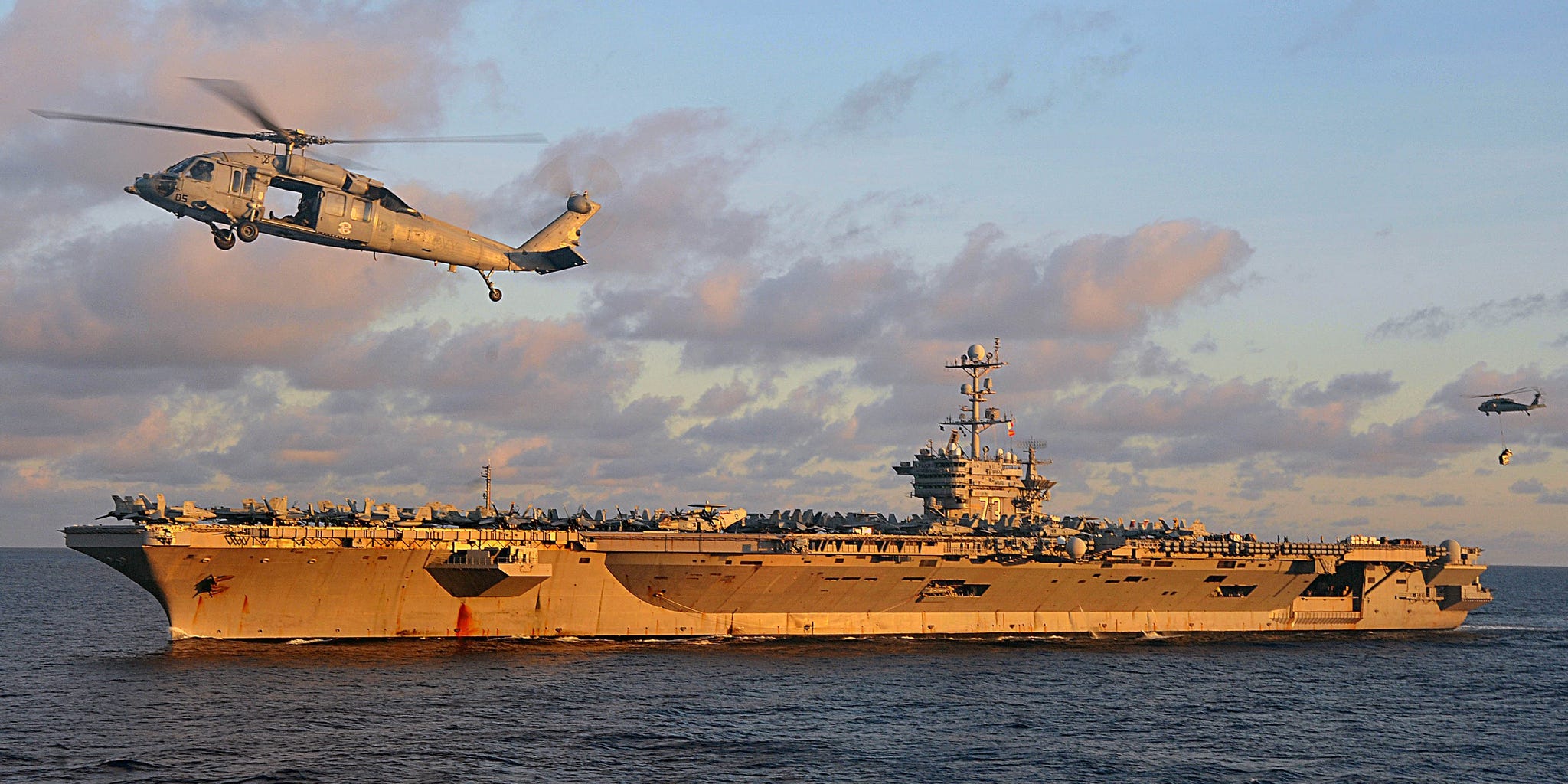 Could China’s missiles really sink a US Navy aircraft carrier? The DF-21D anti-ship ballistic missile (ASBM) has generated a tremendous amount of interest over the past several years.

If it works, it poses a very serious threat to US Navy (USN) carriers, as well as to the other advanced warships of the USN, of the Japanese Maritime Self-Defense Force, and others.

An anti-ship ballistic missile is more than just a missile; it requires a broad, sophisticated support system. Unlike a missile launched at static targets, a carrier-killing ASBM requires terminal guidance, as it must revise its flight path after reentering the atmosphere.

From launch to strike, the flight of an ASBM can take 15 or so minutes, at which time the carrier in question will have more than likely moved its position on the open ocean. The missile thus needs to be adjusted remotely or needs to have the capacity to identify the carrier on its own.

Both of these processes depend on the operation of a sophisticated set of sensors, as well as a communication system capable of integrating these sensors and transmitting information to shooters. The USN is very concerned about the DF-21D, which is one reason it’s working so hard on ship-borne anti-ballistic missile (ABM) technology. The USN is also working on other countermeasures, including strikes on DF-21 launch sites at the onset of war (potentially delivered from nuclear cruise missile submarines (SSGNs), and electronic warfare.

This is why it’s so important to emphasize the importance of the ancillary ISR and communication system that make the DF-21D possible. The US doesn’t need to destroy every launcher or shoot down every missile in flight.

Both of those represent important capabilities, but the key task is to disrupt the system that supports the missile, making it hard for China to identify, target, and strike US carrier groups.

No one knows what would happen if the Second Artillery launched a salvo of DF-21Ds at a US carrier battle group. Some percentage (depending on reliability) would invariably go astray without US help. US escorts would shoot down some percentage with ship-board ABM systems.

Electronic disruption would cause some to plunge harmlessly into the ocean. And finally, some might hit a carrier or hit carrier escorts. A successful hit will almost certainly result in at least a “mission kill,” disabling a US carrier for the remainder of the conflict. It bears emphasis that Chinese carrier-killing capabilities constitute a system of systems, not dependent upon any particular weapon. The rest of China’s system of systems includes nuclear and conventional submarines, medium- and long-range strike aircraft, surface warships, and land-based cruise-missile installations.

These platforms can launch a wide array of weapons, most importantly China’s vast arsenal of cruise missiles.

In sufficient numbers, all of these can threaten to kill a carrier. In a shooting war we could expect China to use all of these systems or to graduate their use depending on political and military developments.

Some of these are more easily countered than others, while some pose greater costs to the Chinese. For example, any surface ship launching a cruise missile at a USN carrier group can likely expect quick destruction. Similarly, both aircraft and submarines would face a high rate of attrition while making attacks on US ships and installations.

ASBMs have some obvious advantages over these other systems. Operating from land bases, the DF-21D can strike carrier groups at greater range (1,000+ miles) than any cruise missile. US air-defense systems were designed to defend against Soviet cruise-missile attacks, but a ballistic-missile attack is a different prospect entirely.

While the US can strike land bases, China can defend these targets more heavily through active and passive measures that it can protect relatively fragile ships and aircraft. The development of the DF-21D may have contributed to the USN’s decision to focus on air-defense ships (such as the Arleigh Burke Flight III) capable of ballistic-missile interception, at the expense of such platforms at the Littoral Combat Ship and the DDG-1000.

But as suggested earlier, the United States has also looked into other options, including SSGN-launched cruise missiles and hypersonic strike vehicles designed to attack Chinese bases before the Second Artillery can launch the missiles.

The United States is also, presumably, working on cyber, electronic, and physical means of disrupting China’s recon and communications systems.

Nevertheless, some have suggested that the DF-21D has rendered the supercarrier obsolete. While it depends on how we use the term “obsolete,” it’s probably too early to make that claim.

China has expended vast time and resources determining how to kill US carriers, which suggests that the Chinese military takes carrier capabilities seriously. Moreover, the number of countries with both the interest and technical capability to develop the system of systems necessary to operate an ASBM is probably limited to two for the foreseeable future, with only Russia joining China.

Still, efforts to diversify US capabilities surely make some sense. SSGNs, equipped with land-attack cruise missiles, can pick up a great deal of the slack while remaining relatively safe from attack. Amphibious assault ships, the term the USN uses for its light carrier fleet, can ably carry out much of the “strategic influence” mission that the supercarriers currently provide. Just because China has ASBMs doesn’t mean that it will use them, even in a shooting war. The point of the “system of systems” is not to use it but instead to deter the US from going to war. Failing that, it is to deter the USN from aggressively using its carrier groups in combat.

Sinking a carrier could kill 6,000 Americans in a few minutes, the prospect of which could make the US president reconsider intervention in any dispute with China. Moreover, ASBMs and the other assorted systems would make USN admirals very leery about sailing its primary assets into danger.

Aircraft carriers don’t just symbolically represent national power, they ARE national power, and the loss of two or three would dramatically cut US capability to intervene anywhere in the world.

However, The DF-21D will suffer from the same problem as the variety of global strike weapons that the United States and others have considered over the years. A credible threat to kill a US carrier at range is great, but no one has any idea what will happen when the Second Artillery first lets loose with a salvo of ASBMs.

Any medium-range ballistic missiles (MRBM) launched could carry a nuclear warhead, targeted either at a carrier or some other target. Chinese leadership will have to count on very cool heads in Washington for the 15 minutes between launch and impact. Much will depend on the extent of contact between Beijing and Washington during the process of escalation; if this process has involved multiple misunderstandings, then launching a missile could lead to a degree of escalation that China has not prepared for.

At the extreme, launching at a US carrier represents an enormous risk, because it could start a decision-process that would bring full nuclear retaliation from the United States. That China still lacks a secure second-strike capability against the US (and would struggle, in context of a conflict, to safely deploy its ballistic missile submarines) makes the situation even less stable, because the Americans might suspect the PLA of engaging in “use it or lose it” thinking.

Even if the US correctly assesses the nature and purpose of the attack, the destruction of a carrier could serve to commit the United States, rather than scare it off.

The United States also faces escalatory problems. In the past, Air-Sea Battle, the emerging “operational toolkit” that has dominated many discussions of US Pacific strategy, apparently envisions pre-emptive strikes against Chinese land-based missile installations.

Such strikes, which make a great deal of sense from an operational perspective, represent a grave danger of strategic escalation. Again, China must recognize the intent behind US attacks and refrain from reacting inappropriately, a problem exacerbated by China’s nuclear deficit. The ASBM is essentially a sea-denial/anti-access weapon, not a sea-control weapon. It cannot prevent the USN from killing Chinese ships, only change the method by which the Americans do so.

The use of such a weapon in anger would carry the potential for grave escalatory consequences on both sides. It’s difficult to imagine what, besides Taiwan, China and the United States might be willing to tolerate such risk for.

As such, it’s not entirely clear how transformative the weapon really is. It certainly marks an important contribution to China’s arsenal, and a harbinger of China’s growing power. It’s impact, however, is more incremental than revolutionary, especially in context of the steady growth of China’s other anti-access options.

One implication of the development of this system is the need for establishing a reliable crisis hotline between the US and Chinese governments, along with norms about how leadership will handle such communication in a crisis setting.

This may prove a tall order for a pair of governments that remain committed to the public position that war is extremely unlikely.

Robert Farley is a senior lecturer at the Patterson School at the University of Kentucky.