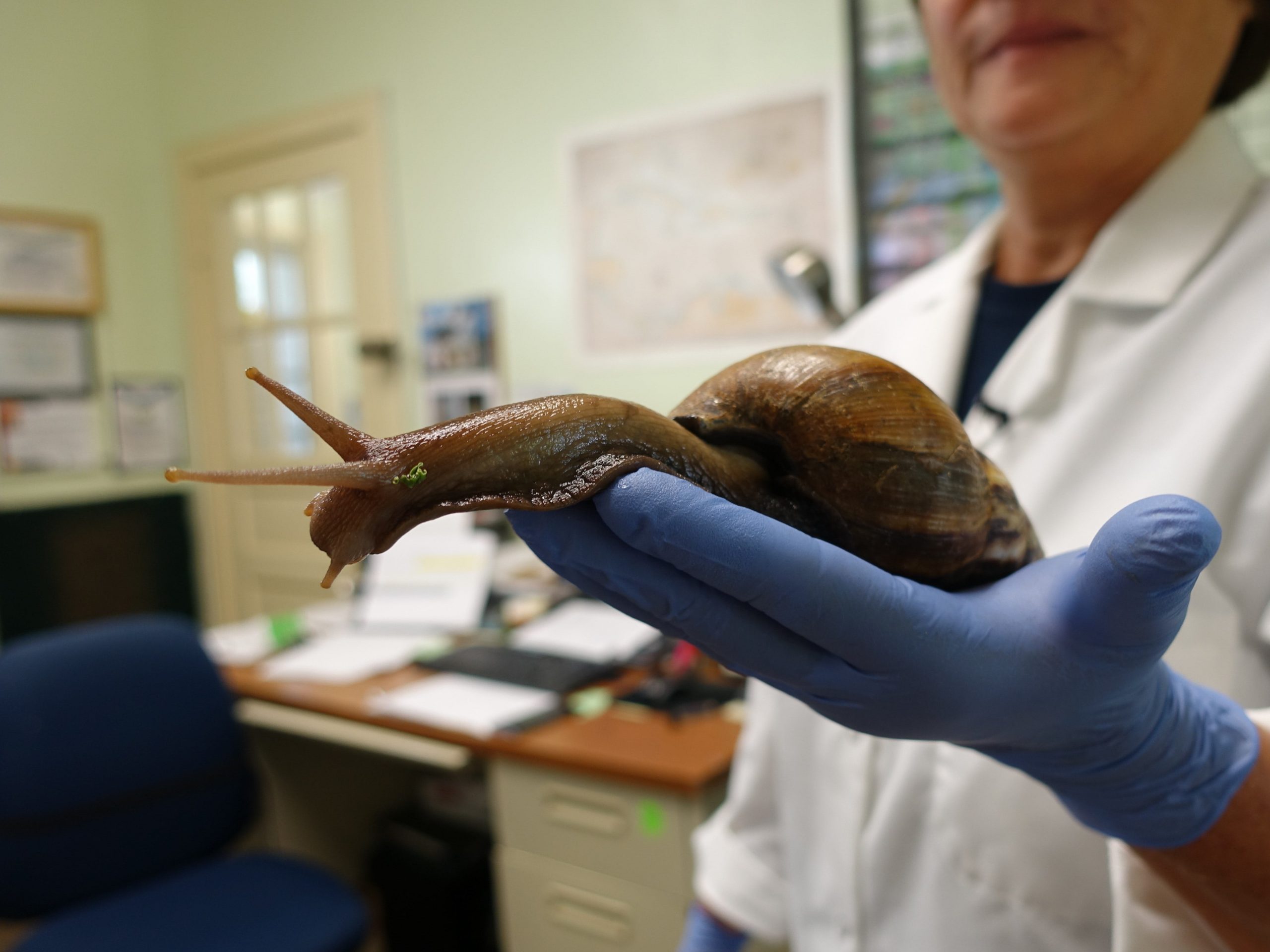 Mary Yong Cong, a Florida Dept. of Agriculture scientist, holds a Giant African Snail in her Miami lab on July 17, 2015.

The giant African land snail may look friendly, but the state of Florida has gone to great lengths to eradicate it — twice.

Now, the slimy creatures are back again.

Officials confirmed on June 23 that a giant African land snail was detected in New Port Richey in Pasco County, located north of Tampa on Florida’s west coast, launching another wave of efforts to rid the state of the snail.

The giant African land snail, Lissachatina fulica, can grow up to 8 inches long and procreate in large quantities, laying thousands of eggs at a time that can go on to hatch and wreak additional havoc.

“The giant African land snail is one of the most damaging snails in the world and consumes at least 500 different types of plants,” the Florida Department of Agriculture and Consumer Services said in a statement announcing the discovery. “These snails could be devastating to Florida agriculture and natural areas as they cause extensive damage to tropical and subtropical environments.”

In addition to its diverse plant diet, the snail is known to feed on paint and stucco for calcium, posing a threat to infrastructure.

The snails can also carry the parasite known as rat lungworm, which can cause meningitis in humans, leading officials to warn the public: “DO NOT HANDLE SNAILS WITHOUT WEARING GLOVES!” Scientist Mary Yong Cong holds one of the Giant African Snails she keeps in her lab in Miami, Florida on July 17, 2015.

The giant African land snail was first detected in Florida in 1969 and eradicated in 1975. It was detected again in 2011 in Miami-Dade County, and again declared eradicated last year. Prior to the recent discovery, a snail had not been detected in the state since 2017.

A quarantine order has been enacted in the area where the snail was detected, making it illegal to remove any plant materials or soil from the area. Officials are surveying for additional specimens in the quarantine zone with the help of a metaldehyde-based molluscicide, or snail bait.

A rescue Labrador named Melon is also being used to survey the area, according to The New York Times. The dog is trained to sit when it smells a giant African land snail.

It’s unclear how the snail made it to Florida, but its white coloring has led officials to suspect it could be the result of a pet snail turned loose, The Times reported. Giant African land snails are illegal to own or import into the US without a permit.

Invasive species pose a major threat to Florida’s agriculture and natural ecosystems. Burmese pythons, green iguanas, and lionfish – all invasive – have found a home and been able to spread in Florida’s environment. The issue is compounded by Florida being a key location in the world reptile trade and serving as the point of entry for most plants imported to the US, according to The Nature Conservancy.