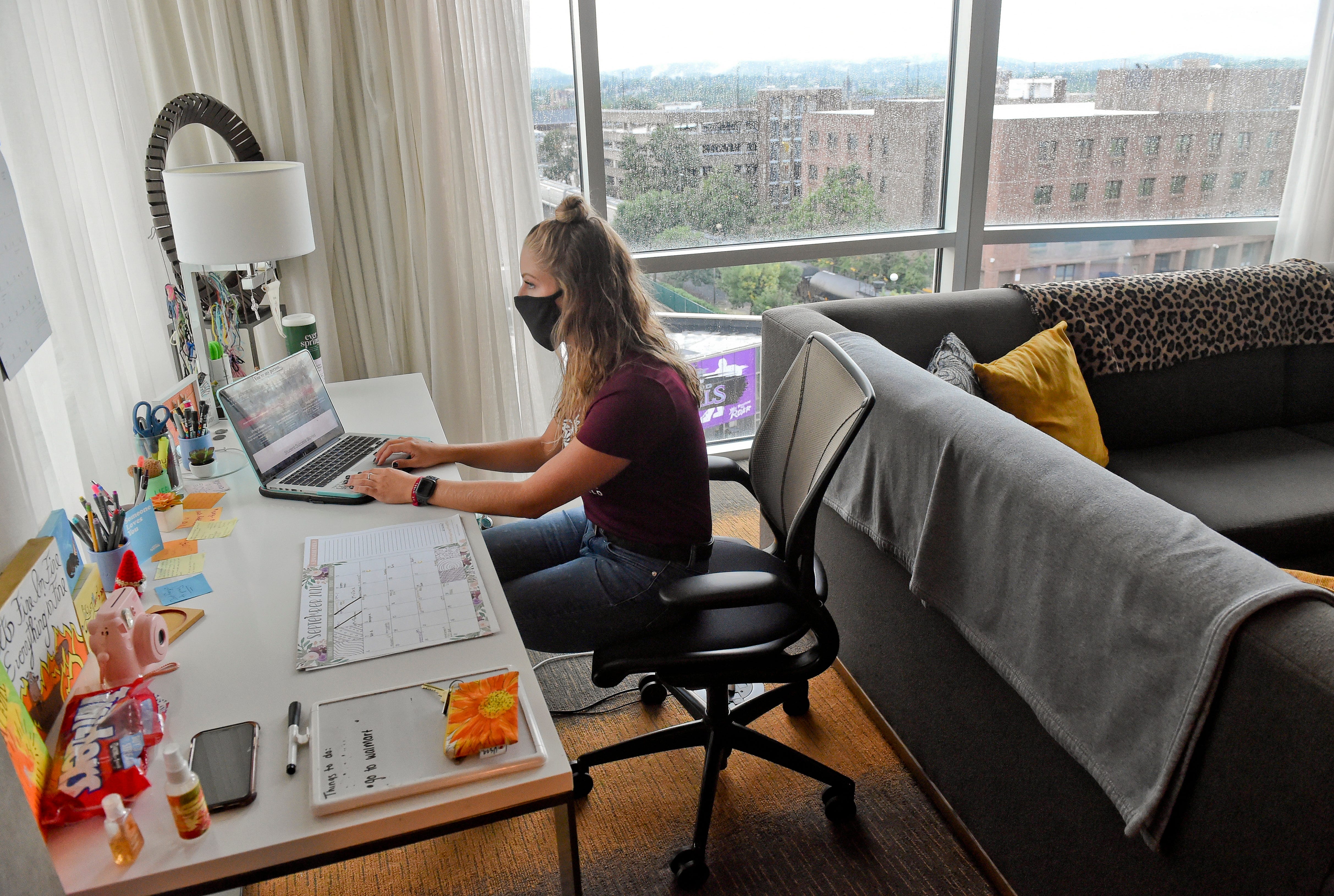 A student quarantines after COVID-19 exposure.

But the Centers for Disease Control and Prevention altered that recommendation on Monday amid a steep rise in Omicron cases across the US. People with COVID-19 who don’t have symptoms should isolate for just 5 days, then wear a mask around others for another 5 days, the CDC said.

The agency said its decision was motivated by the understanding that most coronavirus transmission “occurs early in the course of illness,” generally between 1-2 days before symptoms arrive and 2-3 after a person becomes symptomatic.

Even before Monday’s announcement, some disease experts had questioned whether the old CDC guidelines were too harsh — even for people who develop symptoms.

Jha cited evidence that the average person with COVID-19 probably isn’t contagious at least five days after their first positive test (though some people may be contagious for longer or shorter periods of time). Rapid tests are a good proxy for contagiousness, he added, since they’re designed to yield positive results when a person’s viral load is the highest. When COVID-19 tests are positive.

“Having two antigen tests come up negative is a very, very safe way to ensure that you’re pretty much outside of your window of infectiousness,” Andy Pekosz, a virologist at the Johns Hopkins Bloomberg School of Public Health, told Insider. “One antigen test is good. A second one adds to that level of security and allows you to feel very confident that someone can go back to the workplace without spreading the virus.”

Michael Mina, an epidemiologist at the Harvard TH Chan School of Public Health, also suggested Sunday on Twitter that people should be able to test out of isolation after two days of negative tests. The UK already allows people to end isolation after seven days, following two negative rapid tests taken 24 hours apart.

For those without access to rapid tests, a week of isolation may still be sufficient, some experts recommended.

“Seven to 10 days is probably a fair estimate if you’re not going to be able to confirm your testing status in a reasonable amount of time,” Pekosz said, adding: “A 10-day isolation probably errs on the side of being overly cautious.”

Isolation time may also depend on symptoms and vaccination status A man takes a COVID-19 test at Sydney International Airport on November 28, 2021.

The CDC already adjusted its isolation guidelines for healthcare workers last week. Healthcare workers with COVID-19 can return to work after seven days if they’re asymptomatic and test negative, the agency said.

The New York State Department of Health also said last week that fully vaccinated essential workers, including healthcare professionals, can end their isolation after five days if they’re asymptomatic or their mild symptoms are improving and they don’t have a runny nose. In that case, essential workers don’t have to test negative to end their isolation, the department said.

Pekosz said waning symptoms are usually a sign that a person is becoming less contagious — but symptoms aren’t the sole indicator of whether a person with COVID-19 can infect others.

“We should actually rely more on the antigen test results rather than on the symptoms,” Juliet Morrison, a virologist at the University of California, Riverside, told Insider. “Having symptoms means that you are likely infectious, but we know that there are lots of asymptomatic infections as well as presymptomatic infections and that we can still get transmission in that scenario.”

Isolation guidelines should also consider a person’s vaccination status, she added. Morrison said there’s a case to be made for shortening the isolation period to five days with two negative antigen tests for vaccinated people.

“From a scientific standpoint, it absolutely makes sense that somebody who is vaccinated would be clearing the virus more quickly than somebody who is unvaccinated,” she said, adding: “People do have to support their families, so if five days is enough, we shouldn’t be insisting on 10 or seven.” Rapid tests are more reliable than a PCR when it comes to determining if you’re contagious.

“If you’re trying to test yourself out of isolation, you don’t want a PCR test, because they will give you a positive far out beyond when you are actually contagious,” Morrison said.

But experts caution that even rapid tests aren’t foolproof.

“I always get nervous when we’re using testing to declare somebody as ‘safe,'” said Susan Butler-Wu, an associate professor of clinical pathology at the University of Southern California.

“Not all antigen tests behave identically,” she added. “Each brand works slightly differently in terms of how it’s designed and has a slightly different what we would call ‘limit of detection,’ meaning how much virus has to be there for me to be able to detect it.”

Butler-Wu said she wouldn’t feel comfortable isolating for fewer than 10 days with COVID-19. Scientists are still studying how well rapid tests detect Omicron and how long people with the variant are capable of infecting others, she said.

“Omicron is new. We know it’s more transmissible, but we don’t know as much about it,” Morrison added. “So the 10-day isolation period might be too short, but it might also just be perfect.”