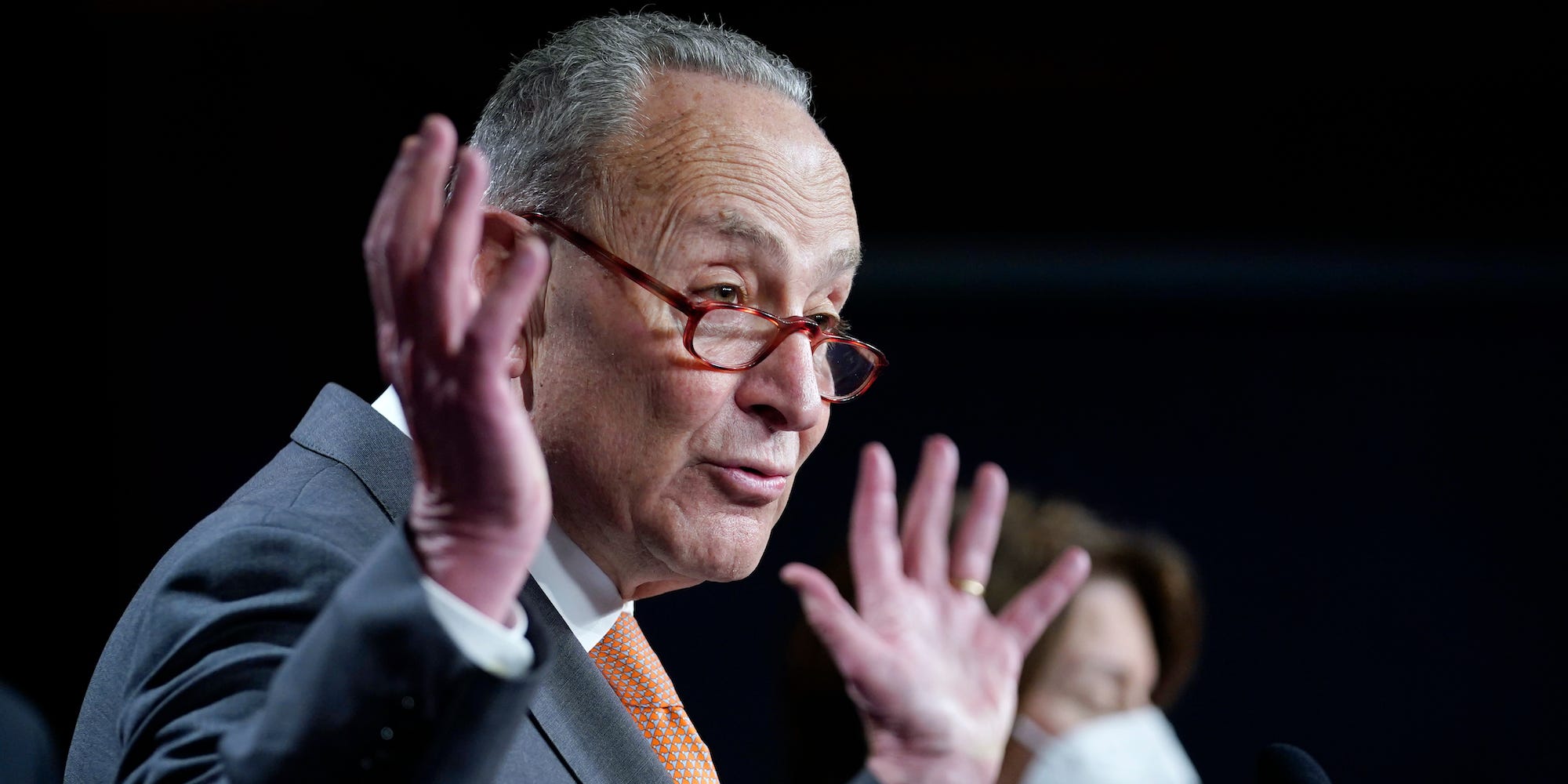 2022 in the US Senate kicked off the same way that 2021 ended, with President Joe Biden’s flagship economic spending package and Senate Democrats’ voting rights legislation on ice largely due to continued opposition from Sen. Joe Manchin of West Virginia.

That wasn’t the only ice Senate Democrats returned to. Heavy snowfall delayed their return to Capitol Hill by a day, and the snowstorm left hundreds of motorists, including Virginia Democrat Sen. Tim Kaine, stranded on I-95 in freezing temperatures and resulted in votes being canceled for the second day in a row.

Manchin’s opposition to the Build Back Better plan is prompting Democrats to put it on the back-burner for the foreseeable future.  The conservative Democrat told Insider on Tuesday he wants only working families to get a child tax credit, putting him at odds with most of his caucus.

In an effort to salvage Biden’s agenda, Democrats are quickly pivoting to an effort to try to reform the 60-vote threshold known as the filibuster after Senate Republicans blocked debate on three major Democratic voting rights and democracy reform bills in 2021, including two supported by Manchin.

Senate Majority Chuck Schumer has explicitly tied the latest push to pass voting rights legislation to the one-year anniversary of the January 6 storming of the Capitol, calling the insurrection “a symptom of a broader illness — an effort to delegitimize our election process” in a Monday letter to the Democratic caucus about voting rights.

“We hope our Republican colleagues change course and work with us,” Schumer wrote of voting rights. “But if they do not, the Senate will debate and consider changes to Senate rules on or before January 17, Martin Luther King Jr. Day, to protect the foundation of our democracy: free and fair elections.”

The vast majority of legislation in the Senate requires a three-fifths majority under the current Senate rules. The reforms to the filibuster Democratic leaders are discussing with Manchin, according to Schumer, include creating a carveout to allow voting rights legislation to pass with a simple majority and returning to the talking filibuster.

Senate Democrats can invoke the so-called nuclear option to change the filibuster rules with just a simple majority vote, as the late Senate Majority Leader Harry Reid did in 2013 to lower the threshold to confirm certain judicial and executive branch nominees. In this Dec. 13, 2021, photo, Sen. Joe Manchin, D-W.Va., leaves his office after speaking with President Joe Biden about his long-stalled domestic agenda, at the Capitol in Washington.

But, like with the Build Back Better plan, Democrats are running up against a familiar math problem involving Manchin, who has repeatedly opposed such a carve out for voting rights and argued that it could come back to bite Democrats when the other party controls the Senate.

“It’s very difficult, it’s a heavy lift,” Manchin told reporters outside his office on Tuesday. “Once you change rules or have a carve out…and I’ve always said this: Anytime there’s a carve out, you eat the whole turkey, there’s nothing left, because it comes back. So you want things that’ll be sustainable.”

Manchin has also consistently opposed passing election-related legislation or Senate rules changes along party lines. The West Virginia Democrat tried for weeks to get 10 Republicans on board with one voting rights bill, the Freedom to Vote Act — but all 50 voted to block debate in late October.

Democrats are punting Biden’s sprawling economic spending plan until after their aggressive push on elections reform.

“We are focused on voting rights as we should be. And I think the White House is joining us in that effort,” Sen. Dick Durbin, the second-ranked Senate Democrat, told reporters. “And clearly we’ll return to build back better as soon as that is done.”

There are few signs that Democrats are close to resolving basic disagreements on the size and scope of the plan, which would expand childcare, healthcare, and renew a now-lapsed child tax credit expansion for another year.

Manchin put a dagger into the legislation late last month, saying in a Fox News interview that he couldn’t cast a vote for it. On Tuesday, he listed a familiar litany of reasons for opposing it, including worsening inflation and “geopolitical unrest.”

“There [are] no negotiations going on at this time,” Manchin told reporters Tuesday morning.