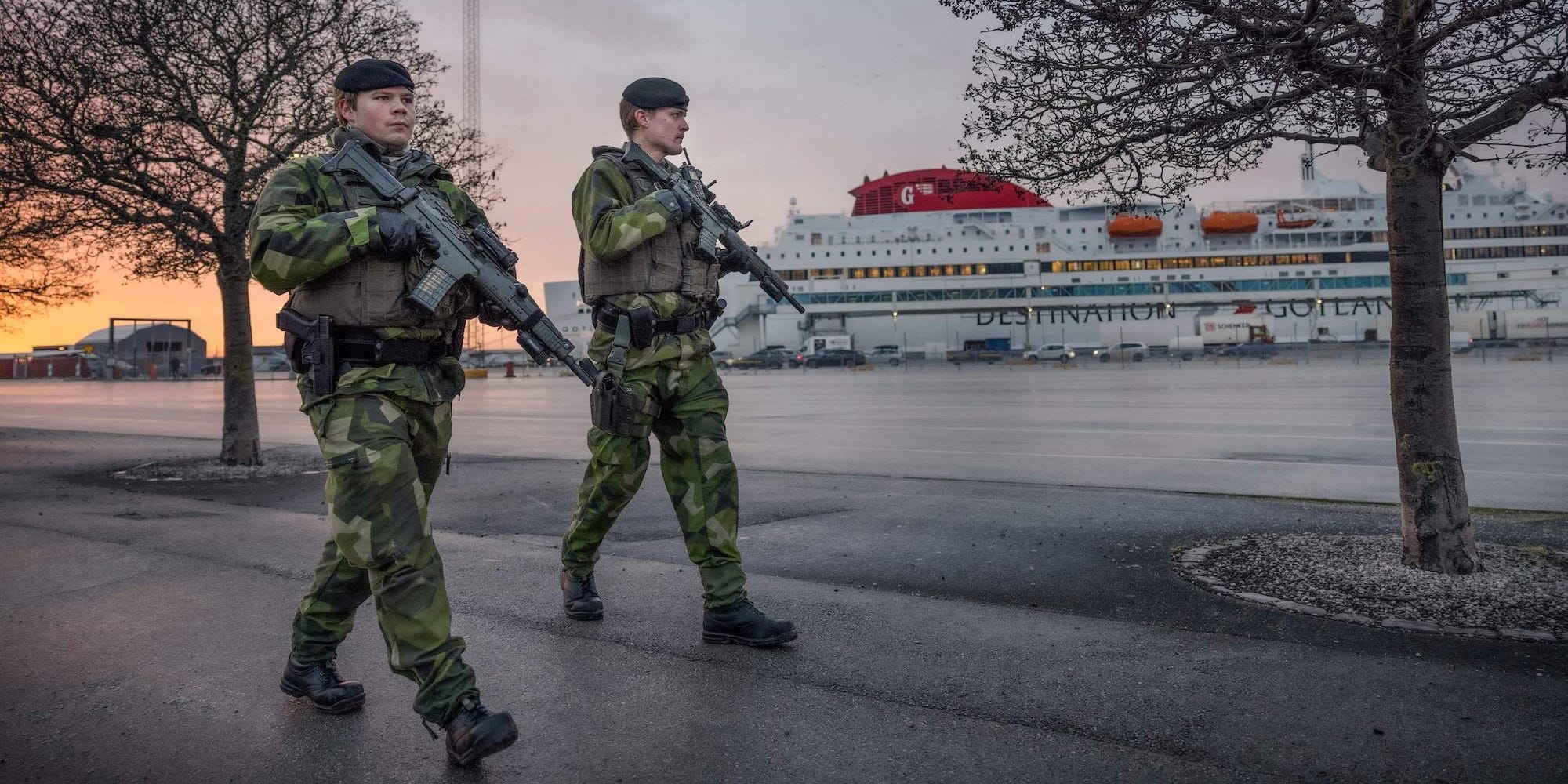 NATO members have marshaled support for Ukraine as Russia has raised military pressure on Kyiv in recent months, supplying arms and equipment to Ukraine and bolstering their own presence in nearby countries.

Nordic countries, including non-NATO members Sweden and Finland, have also increased their military readiness in recent weeks, responding to Russia’s buildup around Ukraine but also to longer-term concerns about Russian activity in their region.

In mid-January, Sweden announced an increase to its military preparedness, which included deploying troops to Gotland Island in the middle of the Baltic Sea, a move prompted in part by Russian naval movements nearby.

“It does not have to mean an increased threat, but we always want to adapt to the prevailing situation,” Sweden’s chief of military operations said of the readiness boost.

At the end of January, Finland announced a similar move, with an official saying readiness had been “enhanced due to the fact that the situation in nearby areas has become more unstable.” The official said that while Finland did not face any threat it needed to more closely monitor the region in light of Russia’s actions. Russian warships during artillery drills in the Baltic Sea, in an image from a video released January 27, 2022.

Finland and Sweden’s neighbors, NATO members Norway and Denmark, have taken similar steps, and Denmark’s military said this month that it would up its readiness — including increased monitoring of Danish waters and sending fighter jets to the island of Bornholm — “due to the unacceptable Russian military pressure on Ukraine.”

The moves were “precautionary,” Denmark’s chief of defense said. “We increase our military options in order to be able to react faster, if the situation so dictates.”

Denmark’s and Norway’s moves are part of NATO’s reassurance efforts and signal to “Russia not to seek any escalatory manoeuvres with NATO,” said Mathieu Boulegue, a research fellow for Russia and Eurasia at the British think tank Chatham House.

While not in NATO, Sweden and Finland partner closely with the alliance, and their moves are also messages to Moscow to avoid escalation through actions such as dangerous maneuvers or military exercises, Boulegue told Insider.

“Overall, Nordic countries, I believe, are less concerned about risks of conflict with Russia than about avoiding horizontal escalation” through accidents or tactical errors — a message that was particularly relevant ahead of a major NATO exercise to be held in Norway in March, Boulegue said. Finnish military personnel at a training ground in Sweden, October 27, 2018.

For Sweden and Finland, Moscow’s pressure on Ukraine is only its latest alarming action. Both have watched recent Russian military activity in the Baltic and in the Arctic with concern. That is a major factor behind their recent moves.

Finland’s readiness increase wasn’t in response to a specific event but to what its military “had observed throughout the previous year, in the fall especially,” said Charly Salonius-Pasternak, a lead researcher at the Finnish Institute of International Affairs.

Based on that, Finnish officials determined that they needed to show increased readiness in early 2022, Salonius-Pasternak told Insider, saying the announcement was about Russia even if it wasn’t directed at Russia and was meant to remind “potential partners who may be wondering if Finland’s not doing anything, that, yes, we’re awake, and yes, we’re very capable.”

Like NATO, Finland and Sweden were alarmed by Russia’s attacks on Georgia in 2008 and on Ukraine in 2014, which showed Russia was willing to use the military it had spent the previous decade building up, Sweden’s ambassador to the US, Karin Olofsdotter, said in a March 2021 interview. “We really feel that Russia is an increased threat to the European security order,” Olofsdotter said at the time, citing Russia’s increased military exercises and activity in the Baltic. “We feel the presence very closely, and this is something we’ve seen over time.”

Since then, Sweden and Finland have invested more in their militaries. Finland recently purchased 64 US-made F-35 fighter jets, and it is acquiring new warships and equipment for ground troops.

Sweden has reemphasized civil defense and is training more military conscripts. It’s also acquiring and fielding new weapons, like the air-defense system deployed to Gotland in 2019. “As we have seen the situation in our vicinity deteriorating, this is the way of meeting the threats that we see,” Olofsdotter said last year.

Like Gotland and Denmark’s Bornholm, Finland’s Åland Islands sit on important Baltic sea lanes, which makes them likely targets in a conflict.

Åland Islands’ autonomous and demilitarized status means Finland’s military can’t operate there, but its recent exercises have included activities that are “directly transferable to a situation” in which troops need to move there “very fast,” Salonius-Pasternak said. The islands of Bornholm, Gotland, and Åland are likely targets in a conflict in the Baltic Sea.

Ukraine’s pursuit of NATO membership is a driving factor behind current tensions with Russia, which have also renewed Sweden’s and Finland’s own years-long debates on membership.

Neither country has plans to join, but both reject Moscow’s attempts to dictate who could. Finnish leaders fear that restricting Ukraine’s right to seek membership could decrease their “room to manoeuvre in security policy,” said Sinikukka Saari, also a lead researcher at the Finnish Institute of International Affairs.

While recent tension hasn’t affected Finland’s NATO policy or led more Finns to support membership, it has had an impact.

“The group of the population who used to say ‘no,’ some of it has clearly shifted to ‘I don’t know,'” Salonius-Pasternak said. “People are saying, ‘OK, I might have had a strong opinion on ‘No,’ but now I’m watching what’s happening with Ukraine. I’m listening. I’m thinking. I’m paying attention to this.'”