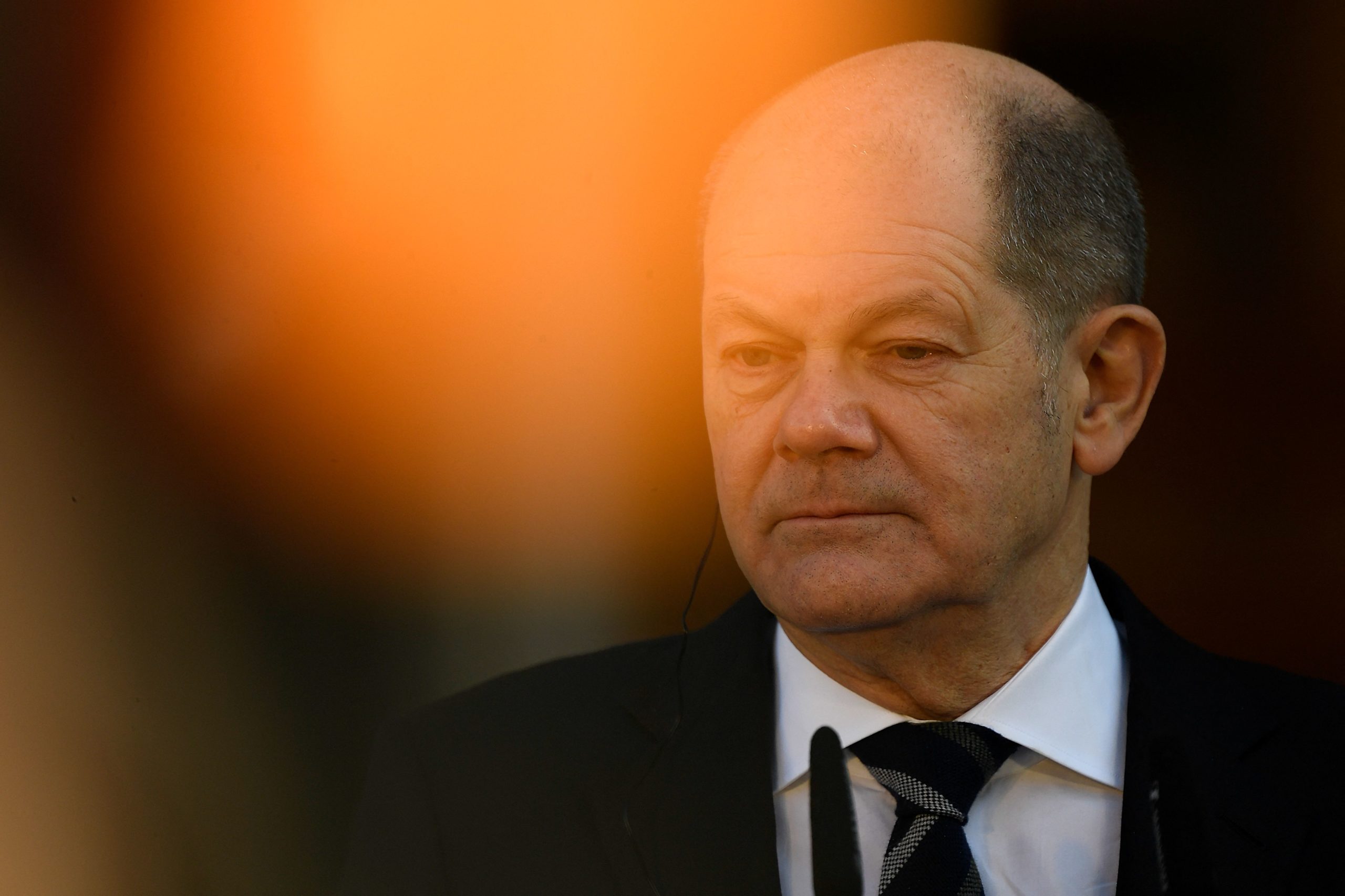 BERLIN — Russia’s saber-rattling over Ukraine, and its standoff with the West, are laying bare divisions within Germany’s new governing coalition, posing an early foreign policy test for Chancellor Olaf Scholz.

On Tuesday, Foreign Minister Annalena Baerbock, of the Greens, a junior coalition partner, will be in Moscow to meet her Russian counterpart Sergey Lavrov for talks that she hopes will lead to a de-escalation of tensions at the Ukrainian border, where Russia has amassed some 100,000 troops.

A series of meetings last week between Russia and the U.S. and NATO allies — as well as members of the Organization for Security and Cooperation in Europe — failed to ease the tensions, and Moscow continues to threaten military action if the West does not meet its demands, including a guarantee that Ukraine and Georgia will never join NATO.

While Baerbock has advocated for both dialogue with and a stricter line toward Russia, her visit to Moscow is complicated by conflicting signals coming from the chancellor’s Social Democratic Party (SPD), and risks the appearance that Berlin may be engaging in a bit of freelancing at a time when Western allies have worked hard to portray themselves as completely in lockstep when it comes to the Kremlin.

The divisions within Germany’s coalition are particularly visible when it comes to the controversial Nord Stream 2 gas pipeline, which critics call a “geopolitical weapon” that Moscow could use against Ukraine or the EU, and which the U.S. has said would be subject to sweeping sanctions in the case of an attack on Ukraine.

Senior SPD politicians have defended Nord Stream 2, including Defense Minister Christine Lambrecht and the party’s Secretary-General Kevin Kühnert, who last week said the pipeline should not be linked in any way to the Russian-Ukrainian tensions. That raised questions about the seriousness of repeated warnings to Moscow by Germany and the EU that any further aggression against Ukraine would have “serious consequences.”

Scholz himself has also taken a soft line and last month even argued the pipeline was merely a “private economy project,” suggesting it had no political dimension — a view that is hotly disputed by Kyiv and by eastern EU countries, including Poland and the Baltic states.

During a visit to Madrid on Monday, Scholz dodged a reporter’s question about whether he was still of that opinion and instead said that Moscow would pay “a high price” for attacking Ukraine.

“The situation is very serious,” Scholz said. “The movement of [Russian] troops along the Ukrainian border cannot be overlooked. It is massive, and it is a threat to the sovereignty of Ukraine. And therefore everything must be done to prevent a military escalation.”

The SPD has a long history of taking a softer line on Russia, notably through the Ostpolitik of former Chancellor Willy Brandt, who sought diplomatic engagement with the Soviet Union and communist Eastern European countries in the late 1960s and early 1970s. More recently, another former SPD chancellor, Gerhard Schröder, has become a symbol of close economic ties with Moscow, as chairman of the Nord Stream shareholders’ committee.

Some Social Democrats, however, are now pushing for a tougher line. “It must be clear to all parties that, in the event of a further military escalation against Ukraine, we cannot simply return to business as usual,” Michael Roth, a former Europe minister and now chair of the Bundestag’s foreign affairs committee, told POLITICO.

“The EU must put all options — including Nord Stream 2 — on the table. We cannot simply carry on as before,” Roth added. “This is definitely not a matter for Germany alone; it will have to be discussed in concert with the EU.”

Germany’s uneven position on Nord Stream seems likely to add to the challenges facing Baerbock as she engages with Lavrov, widely viewed as one of the most fearsome diplomats on the world stage.

Ahead of her trip to the Russian capital, the foreign minister was already under pressure during a visit on Monday to Ukraine, where she faced criticism over Germany’s refusal to allow arms shipments, especially of air defense weapons, to Kyiv.

Baerbock stressed that she wanted “to underline that we don’t conduct any talks over Ukraine without involving Ukraine,” and that Russia had no right to tell Ukraine not to aspire to membership of NATO, but those remarks weren’t enough to soothe the anger.

Over the weekend, Kyiv’s ambassador to Berlin, Andrij Melnyk, said the Ukrainian people were “extremely disappointed” at the German position, and Ukrainian Foreign Minister Dmytro Kuleba said Monday during a news conference with Baerbock that any weapons supplied would merely be used to defend Ukrainian territory against a potential Russian attack.

Baerbock, however, reiterated Berlin’s refusal to grant the request and stressed that out of “historical responsibility,” Germany could not deliver any weapons to crisis zones. “The German contribution to supporting Ukraine, to Ukraine’s security … is very multifaceted,” she said, arguing her country was helping by treating wounded soldiers and building a military hospital.

Scholz backed the foreign minister on that point on Monday, pointing out that the previous conservative-led government of Angela Merkel had also refused to export arms to Kyiv. “The government is acting in a very unified way on this issue, and that includes being consistent with what German governments have done wisely on this issue in the past,” he said.

For many Western powers, Baerbock’s visit and the German coalition’s unease mean Moscow could see an opportunity to sow divisions between Germany, the EU’s biggest and richest member, and other NATO allies as they seek to maintain unity in the face of Russian threats.

Baerbock’s appearance in the Russian capital risks sending a message that Berlin cares more about its bilateral relations, including economic ties, than it does about the Russian military buildup on the border with Ukraine. That troop build-up continues, with reports on Monday that Russian forces have begun arriving in Belarus for joint military exercises.

Russia is always keen to divide Western allies and on Monday, the Russian Foreign Ministry issued a long statement about Baerbock’s visit that made clear her meeting with Lavrov would be used to portray relations with Germany as strong despite the current security tensions. The ministry was even so bold as to assert that “the demand for improving relations with Russia is present in German society.”

“During the talks between the ministers, it is planned to discuss the state and prospects of Russian-German relations, the formation of a schedule of political contacts, the practical aspects of building cooperation in the trade, economic, cultural, humanitarian and historical-memorial spheres,” the ministry stated.

The press release added, “There will be an in-depth exchange of views on the most pressing international problems, primarily the implementation of Russian proposals for comprehensive security guarantees in Europe.”

The statement also sought to flatter Berlin, saying Moscow “regards Germany as an influential player in the international arena, a significant neighbor for us, with which Russia’s relations have always retained a special character.”

The SPD’s Roth said he hopes Baerbock’s visit will be “the prelude to further talks” to de-escalate the situation at the Ukrainian border.

But Roth also acknowledged that the mission will be difficult and meant a clash of “different cultures of diplomacy.”