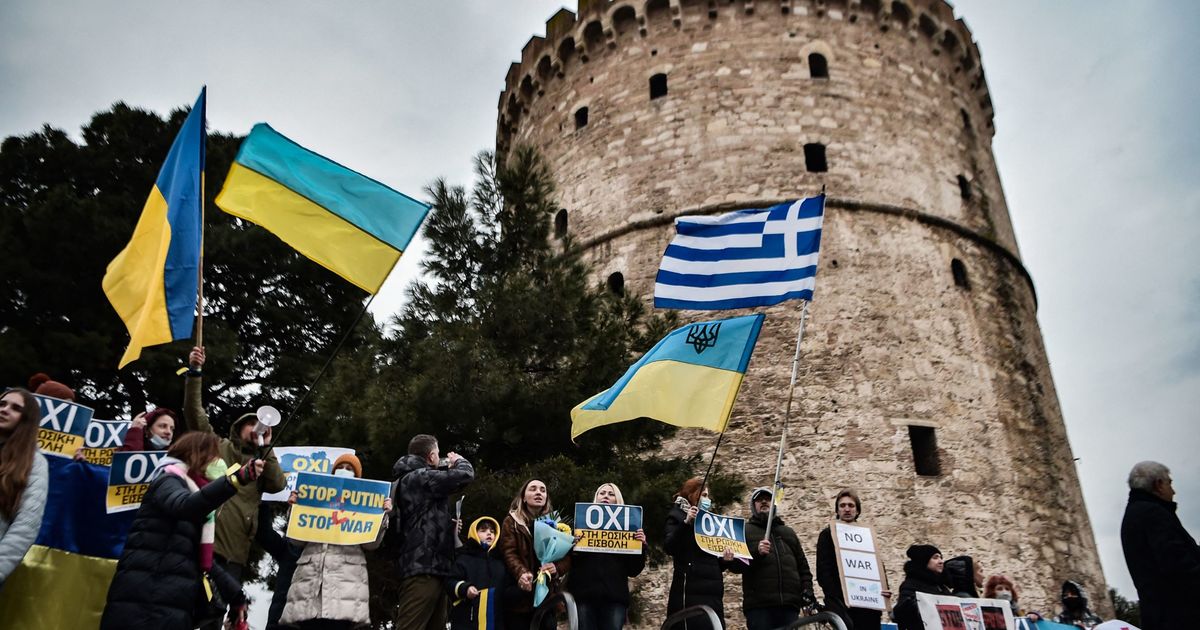 When Afina Khadzhynova fled Mariupol on March 15, she had 10 minutes to throw together a few essentials for the hazardous journey away from Russia’s bombs — documents, blankets, emergency food supplies.

Left behind: An entire archive documenting the history of the Roumeans, part of the ethnic Greek population that has lived in southern Ukraine for generations. It’s one of the largest and oldest groups of ethnic Greeks outside Greece.

That history risks being lost amid the near-total destruction of Mariupol and its surrounding villages. The port city of 450,000 has experienced some of the worst destruction since Russia sent its troops streaming into Ukraine. Amid that onslaught, at least 10 ethnic Greeks have been killed, according to Greek officials, and countless others have been forced out of their homes — and away from the materials that preserve their culture.

“What do you take first from your home?” Khadzhynova reflected. “We have pictures, we have works of art, and we have the archive. It won’t fit in a suitcase; we weren’t ready to take it.”

Her father, a schoolteacher and folklorist in the 1960s and ’70s, had spent his life building the collection, which tells the Roumean story through a reservoir of photos, poems and songs. That story is now stored in a home under Russian siege that may have already been destroyed.

“It’s all still there, a whole archive of Roumean history and culture,” she said. “It’s such a loss.”

It’s just one of many losses amid the Russian onslaught that has imperiled the Greek community within Ukraine — and its connection to Athens.

Efforts to preserve the group’s cultural heritage had previously helped challenge the stereotype that Ukrainian Greeks were overly pro-Russian. Now, with the community scattered and out of touch, Russia is taking advantage, pushing the narrative that Ukrainian Greeks blame Kyiv’s military for committing the atrocities that are, in reality, linked to Russian brutality. Some Greek media outlets have even amplified that narrative back home.

“Greece isn’t doing anything,” Khadzhynova said. “And the Russians now are using Greeks to show that they are pro-Russian.”

Roumeans are part of the North Azovian Greek community, which is descended from the Greeks that Russia moved in the 18th century from Crimea into what is now eastern Ukraine.

The group, which includes about 70,000 people, is split into Roumeans, whose language is similar to modern Greek, and Urums, who speak a Turkic language close to modern Crimean Tatar. Both languages are spoken only in this southeast corner of Ukraine, and were both critically endangered before the war, with no state programs to preserve them through teaching in schools.

Khadzhynova, born in the village of Sartana, was one of a grassroots group of native speakers, researchers and activists seeking to preserve and revive the North Azovian Greek languages and culture.

War has now decimated the team.

For two weeks, Khadzhynova was trapped in Mariupol under constant bombardment, without electricity, water, heating or any phone and internet connection. She cooked outside and boiled water from a nearby stream on a bonfire.

Every day, she watched the smoke rising as missiles struck the other side of the city, where her brother and two nieces live. She had no way of getting in touch with them. Her friends and other Roumean and Urum activists were also impossible to reach, either in Mariupol or in surrounding villages that were bombed and fell under Russian control.

“The worse thing was this not knowing,” she said. “We didn’t know what was happening in the world, or in Ukraine, or even in Mariupol. We had no idea. It was too terrifying to even leave the house because we could end up under shelling.”

When Khadzhynova and her mother fled, her building was one of the few left undamaged — although she has since heard it too was shelled. Up to 90 percent of the city’s buildings have been damaged, according to Mariupol’s mayor, and thousands of civilians may have died, the U.N. human rights body said.

Now in Cyprus with her mother, Khadzhynova still has no news about whether her relatives, or many other activists, are alive or dead.

The Greek consul in Mariupol, Manolis Androulakis, left two days after Khadzhynova. Many members of the Federation of Greek Societies of Ukraine remain in Mariupol and cannot be reached.

The federation’s head, Aleksandra Protsenko, did safely arrive in Greece in late March. But she told a Greek newspaper that the Greek center in Mariupol had been destroyed.

The attacks on Mariupol initially spurred a strong response from Greece.

The Greek prime minister strongly condemned Russia’s invasion and pledged military aid for Ukraine. Greece also pledged to work with France and Turkey on establishing a humanitarian corridor to evacuate Mariupol, even offering to have its foreign minister personally lead the initiative. The country also pledged to lean on the International Criminal Court to investigate possible war crimes in Mariupol.

It was an abrupt about-face for a country that has long shared religious, economic and cultural ties with Russia dating back to the early 19th century Greek War of Independence.

Still, the shared affinity lingers across both Greek and Ukrainian societies.

Greek and Russian media have repeated claims that ethnic Greeks in Ukraine, like Russian speakers, were discriminated against. And within Ukraine, much of the Greek community held traditionally pro-Russian views before the current invasion. More nationalist Ukrainians eyed the group with suspicion, particularly after 2014, when Crimea and parts of the Donetsk region, with their large Greek communities, effectively came under Russian control.

“I always defended Greeks, even if they were pro-Russian, because people like to tar everyone with the same brush,” said Khadzhynova. “I was never discriminated against or repressed in Ukraine for being Greek. But there is a stereotype in Ukraine that all Greeks are separatists.”

The effort to preserve the Roumean and Urum languages tried to combat those perceptions.

Oleksandr Rybalko, a linguist originally from Donetsk, started working with Greek Ukrainian colleagues in 2005 to research and promote these languages. They produced discs featuring music and spoken word passages. They made phrasebooks and children’s alphabets with verses for each letter written by native speakers from villages around Mariupol.

“I wanted to show by example that Ukrainians care about these languages, and that they’re part of our national Ukrainian cultural landscape,” said Rybalko, who now lives in Kyiv.

The projects were a volunteer effort, with minimal support from the Ukrainian state. Rybalko was also working to promote cultural tourism in the Ukrainian Sea of Azov region and was planning a series of festivals for this spring and summer featuring the North Azovian Greek and other minority cultures.

Like so much else in Ukraine, those plans have now gone up in smoke. Museums housing Greek ethnological collections in Mariupol and Sartana have likely been destroyed, as has the Greek department at Mariupol State University. Rybalko’s local collaborators and partners have disappeared.

“We’re all so worried because we just don’t know what has happened to people,” said Rybalko. “Sartana was bombed early on, and the situation in Mariupol is just unbearable now.”

From Cyprus, Khadzhynova has written to former Greek consuls in Mariupol, asking to be included in Greece’s proposed humanitarian mission so she can go back to look for her nieces.

So far, however, the Greek response has left her, and other Ukrainian Greeks, disappointed. The government’s forceful early response has left many Greeks grumbling that it went too far. And a third of Greek lawmakers didn’t show up to hear Ukrainian President Volodymyr Zelenskyy plead with them to help rescue Mariupol residents — a speech that sparked its own controversy when Zelenskyy played a video of a Greek-Ukrainian member of the Azov Battalion, a Ukrainian army unit now fighting in Mariupol, which has been linked in the past to right-wing extremism.

Some Greek media outlets have even been laundering Russian propaganda.

In an open letter written from Mariupol before she left, Protsenko, who heads the Federation of Greek Societies of Ukraine, appealed to Greeks around the world not to let Russian propaganda win out.

She implored people to speak “the truth as it is,” that there is a “genocide of the Ukrainian people, the genocide of its Greeks Of Ukraine by the Russian Federation. Let’s say things by name.”

“This is,” she added, “overt and obvious terrorism.”

However, several Greek outlets have given a platform to Russian media clips portraying the exact opposite narrative. Some have run stories uncritically quoting official Russian Twitter accounts. Others used film clips from Russian media purporting to show Greeks from Khadzhynova’s home village of Sartana, now under Russian control, saying that Ukrainian forces committed atrocities in Mariupol, that Greeks suffered discrimination in Ukraine and that the invading Russians treated them well.

Such material is causing a deep split within the surviving Greek community.

“What can I say now about Sartana Greeks?” Khadzhynova said. “I can’t reject my heritage, but I don’t want to be identified with them.”

Khadzhynova has been tracking such stories in Greek media, as well as the interviews with Greek Ukrainians now in Greece who criticize Ukraine. And her posts about them on social media are getting a flood of comments from unknown accounts boosting Russia’s false version of the war.

Rybalko is witnessing the same thing on the social media channels he runs about North Azovian Greek culture, once a niche interest group.