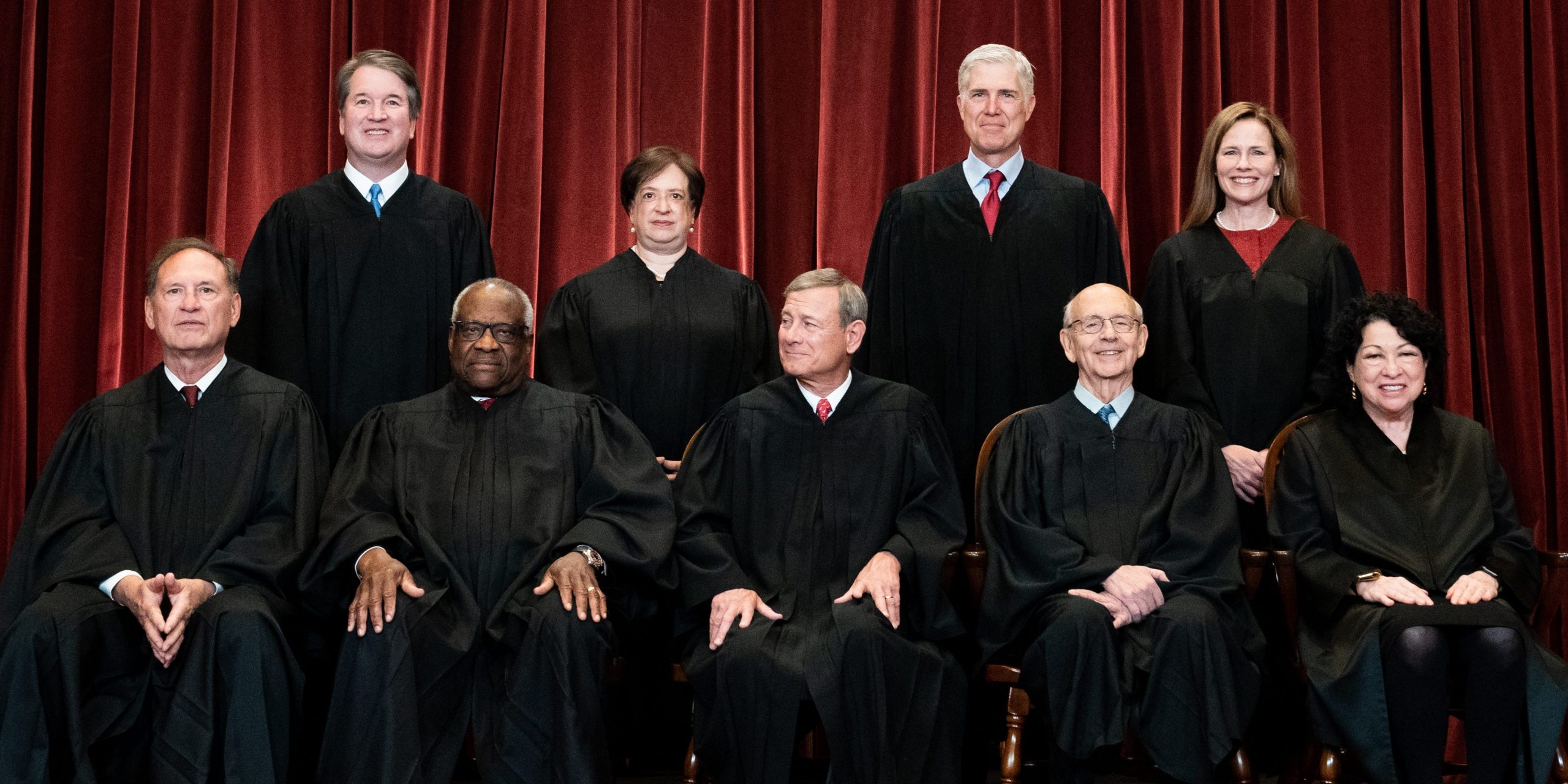 Members of the Supreme Court pose for a group photo on April 23, 2021. Chief Justice John Roberts sits in the center.

The Supreme Court’s conservative wing eradicated the constitutional right to abortion — and Chief Justice John Roberts could not stop them.

Roberts, who favors incremental rather than sweeping changes to the law, sought to weaken Roe v. Wade, the 1973 landmark ruling that legalized abortion nationwide. But the other five conservative justices charged full steam ahead without him, overturning 50 years of precedent and handing abortion decision-making to the states.

Political pundits and legal scholars insisted last Friday’s ruling, for the case Dobbs v. Jackson Women’s Health Organization, revealed that Roberts has lost control over the nation’s highest court. Yet Roberts had lost much of his leverage after the court expanded its conservative tilt in 2020, when Justice Amy Coney Barrett replaced the late liberal Justice Ruth Bader Ginsburg.

The chief justice, eclipsed by the majority, was powerless as his fellow conservatives overturned Roe, driving the court quickly to the right, court watchers told Insider. Roe’s fall presents the most glaring instance yet of the court’s conservatives sidestepping Roberts to shape the law on their terms.

“We may be at a real turning point in terms of his leadership, in terms of the court as an institution,” Carl Tobias, a law professor at the University of Richmond, said.

As chief justice, Roberts has tried to persuade members of the court to avoid such polarizing decisions, in fear of public backlash. Though his desired outcomes were never guaranteed given the court’s current strong-willed majority, court watchers said.

“Bottom line is: he’s still the commander of the ship, but the ship has very active people who have their own strong opinions and who outnumber him,” Mark Kende, a constitutional law professor at Drake University, told Insider.

Court watchers widely believe that Roberts, who has sat on the bench for 17 years, pursued the narrow ruling as part of his longtime goal of defending the Supreme Court’s legitimacy. His efforts fell short, and the court’s reputation is expected to plunge with Roe’s reversal, a reality that’s bound to upset the chief justice.

“What you’re really seeing is that he’s no longer the center of the court,” Sherry Colb, a professor at Cornell Law School, told Insider. “He doesn’t like what’s happening.”

Before the Supreme Court’s decision, Roberts was reportedly advocating for a middle-ground approach to the monumental case: uphold a Mississippi law in question that banned abortion after 15 weeks of pregnancy and do nothing else. That position would have whittled Roe down, eliminating its roughly 24-week viability standard, but stopped short of completely throwing out federal abortion rights. Roberts needed one justice to join him to prevent the court from overruling Roe, along with a subsequent 1992 abortion decision, Planned Parenthood v. Casey.

“This is typical of the chief justice,” Richard Pierce, a George Washington University law professor, told Insider. “What he is about, more than anything else, is trying to protect the reputation of the court and the culture of the court as a group of people who reason with one another.”

Roberts could not force any member of the court to rule a certain way. He could only lure them to his side. Yet the rest of the conservative bloc – Justices Samuel Alito, Clarence Thomas, Neil Gorsuch, Brett Kavanaugh and Barrett – bested the chief justice, leaving him on his own.

“The Court’s decision to overrule Roe and Casey is a serious jolt to the legal system—regardless of how you view those cases,” Roberts wrote in a concurring opinion. “A narrower decision rejecting the misguided viability line would be markedly less unsettling, and nothing more is needed to decide this case.” The chief justice’s colleagues went on to dismiss his thinking and his preference to observe judicial restraint.

“The concurrence’s most fundamental defect is its failure to offer any principled basis for its approach,” Alito wrote in the majority opinion.

“In sum, the concurrence’s quest for a middle way would only put off the day when we would be forced to confront the question we now decide,” he continued. “The turmoil wrought by Roe and Casey would be prolonged. It is far better—for this Court and the country—to face up to the real issue without further delay.”

Just two years ago, Roberts was more likely to hold some sway over the court. He held the pivotal swing vote, maneuvering a series of high-profile decisions on Obamacare, abortion, and other important issues. At the time, Roberts earned a spot on Time Magazine’s 100 most influential people list, where retired Justice Anthony Kennedy fondly credited the chief justice’s role that “strengthened the court and the rule of law.”

This was before Barrett joined the bench, creating five conservative votes that could form a majority without Roberts. His swing vote was relinquished.

To be sure, Roberts, a George W. Bush appointee, is not an abortion-rights supporter. The chief justice aired out his grievances with Roe last Friday. Despite his opposition to the majority’s reversal of the landmark ruling, Roberts gave a nod to their “thoughtful and thorough” opinion.

“I agree with the Court that the viability line established by Roe and Casey should be discarded,” Roberts wrote in his concurring opinion. “That line never made any sense.”

Roberts’ strategy, if it had been adopted, would have substantially eroded Roe’s protections and allowed states to restrict abortion. What would have likely been preserved was Roe’s core tenet that women do have a constitutional right to get an abortion.

Had Roberts had his way, abortion rights would have been chipped away over time, rather than all at once, according to court watchers. The chief justice’s “more measured course,” as he put it, was mostly a display of his effort to protect the court’s independence, they said.

Abortion rights activists rally outside the US Supreme Court after the overturning of Roe v. Wade on June 30, 2022.

“He’s not in favor of Roe. He’s not in favor of abortion rights. But he does want the court to at least be perceived as legitimate,” Radhika Rao, a professor at the University of California Hastings College of Law, told Insider. “Now the veil of legitimacy has been removed and the country is seeing the court as a partisan, political institution.”

By upending the status quo, the court’s conservatives have undermined Roberts’ aim to insulate the institution from partisan politics, Rao added.

The Supreme Court’s approval ratings reached historic lows even before last Friday’s decision dropped. The ruling has ignited a political firestorm in the US that’s anticipated to make the court more unpopular. Though Roberts tried to separate himself from the historic move, it will ultimately fall under his legacy, along with the blowback that comes with it, as periods of Supreme Court history are normally labeled under the chief justice’s name.

“This is the Roberts court, and I’m sure he feels that he wants to leave the court stronger, not weaker, at the end of his tenure,” said Keith Werhan, a constitutional law professor at Tulane University. “I suspect that this troubles him greatly.”

This blockbuster term has ended, but significant questions – including ones dealing with abortion – may soon make their way before the nation’s highest court again, continuing to test the chief justice’s leadership.

“I don’t have the sense that he ever gives up,” Tobias said. “I just don’t think that’s in his DNA.”