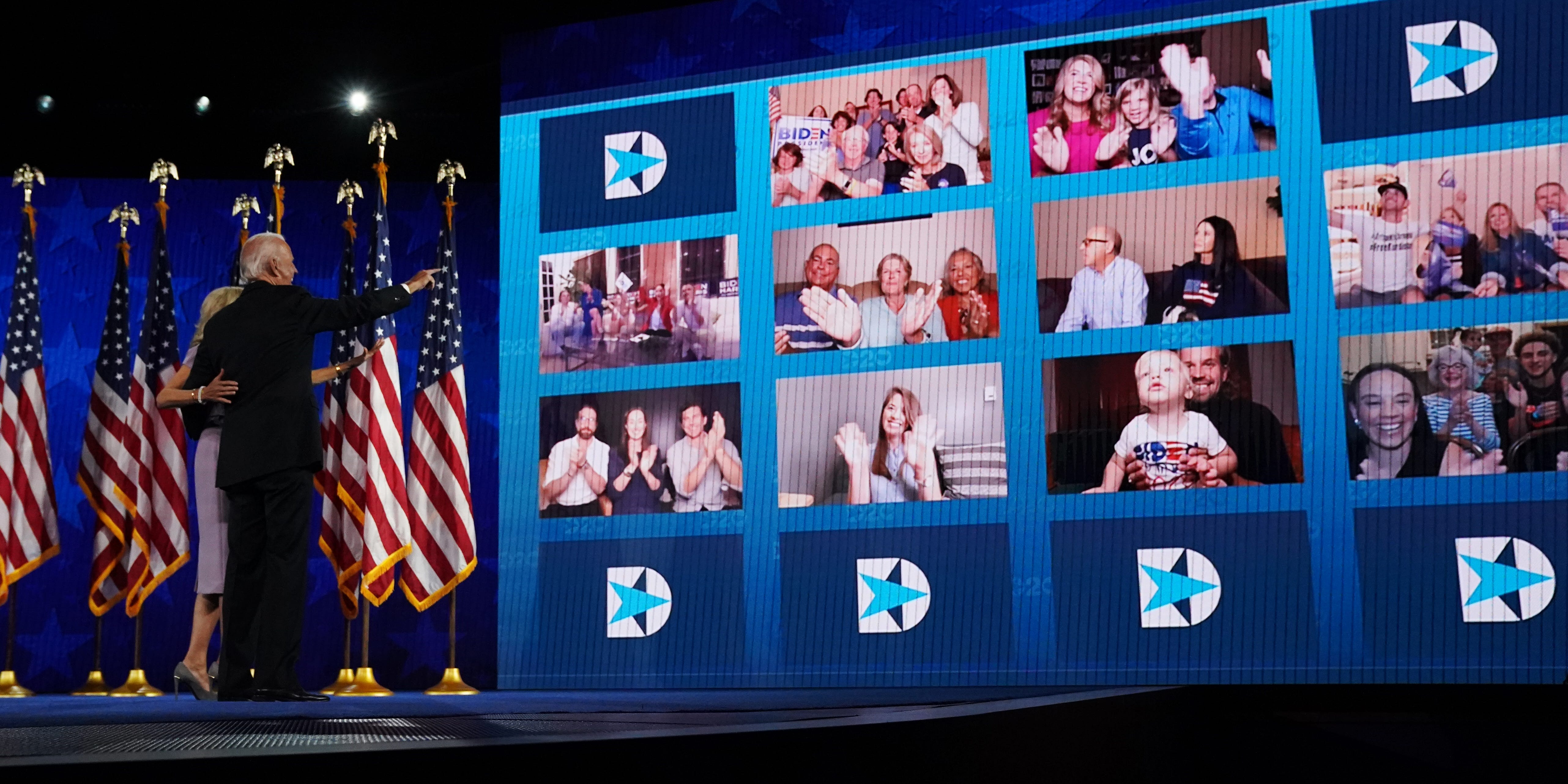 Joe Biden and Jill Biden wave to a crowd of virtual supporters at the 2020 Democratic National Convention.

News that the Democratic National Committee staff opted to unionize on Tuesday was met with cheers from progressive circles — and derision from the other side of the aisle.

Republicans, who as a party are more ideologically skeptical of organized labor, saw the move as a gift to the GOP ahead of the 2022 elections, and a potential hindrance to their rivals’ main fundraising and organizing apparatus.

“This is the greatest act of unilateral disarmament since Carthage submitted to Rome,” former California Republican Party Chairman Ron Nehring told Insider. “Which of those two cities is still on the map today?”

On Tuesday shortly after news broke of the DNCs choice to unionize, Republican National Committee chief of staff Richard Walters said, “We applaud the DNC for rendering themselves even more useless. Perhaps they’ll offer tenure next.”

The DNC is not the first Democratic entity to organize; the 2020 presidential campaigns of Sens. Bernie Sanders, Elizabeth Warren, and ultimate victor Joe Biden unionized. Several private Democratic firms followed in their footsteps in 2021. Still, the DNC’s is the most significant effort to date, as it could set the tone for other organizations, campaigns, and private companies to join unions as well.

But unionization of politics is only happening on one half of the aisle.

Unions advocate for benefits and working conditions for their members. In addition to representing employees in disputes with their managers, unions often fight for pay standards, hourly working limits and overtime, and rules about vacations and breaks. DNC Chairman Jamie Harrison has applauded the unionization of his staffers.

But Republican operatives told Insider that they saw these kinds of union-won concessions as incompatible with the realities of the political industry, particularly campaigns. These all-out operations often work on tight budgets, with staff and volunteers expected to work hours well beyond the standard 40-hour workweek to knock as many doors and win as many voters as possible.

“Resources are already stretched thin, and unionizing is going to make that same amount of work cost drastically more,” Ahrens added. “And it’s ultimately going to result in work that’s needed not being done.”

Conservative politicos told Insider they saw the DNC’s move as a competitive disadvantage for Democrats going into 2022.

“This is actually going to hamper Dem’s effectiveness,” tweeted Liz Mair, a Republican communications strategist who had worked for Sens. Roy Blunt of Missouri and Rand Paul of Kentucky.

She elaborated to Insider that while it was a positive thing for Democratic organizations like the DNC and campaigns to offer concessions like better pay to staffers, that may require re-allocating resources that would otherwise be used to win elections.

On the Sanders campaign, management temporarily butted heads with unionized staffers over salaries for its lowest-paid employees, who wanted a $15-per-hour minimum wage in line with the candidate’s own policy positions, the Washington Post reported. Sanders’ campaign manager Faiz Shakir told the union it could be damaging to the campaign’s budget, the Post reported, though employees ultimately won their wage increase after protracted negotiations.

There were hints of skepticism from Democrats on Tuesday, as well.

After news of the DNC’s unionization broke, Jim Manley, who worked for Democratic giants like the late Sens. Harry Reid and Edward Kennedy, tweeted, “What can possibly go wrong.”

And while 67% of eligible DNC staff signed cards indicating their choice for a union, that left a third of eligible employees who did not indicate their wish to join SEIU Local 500.

Still, Acosta of the DNC union said the move to unionize is only going to “make our workplaces more effective, efficient, and safer” for staff.

“It’s giving our staff a stronger voice in the conversation in the workplace, which is only going to improve our productivity in the coming years,” he told Insider.