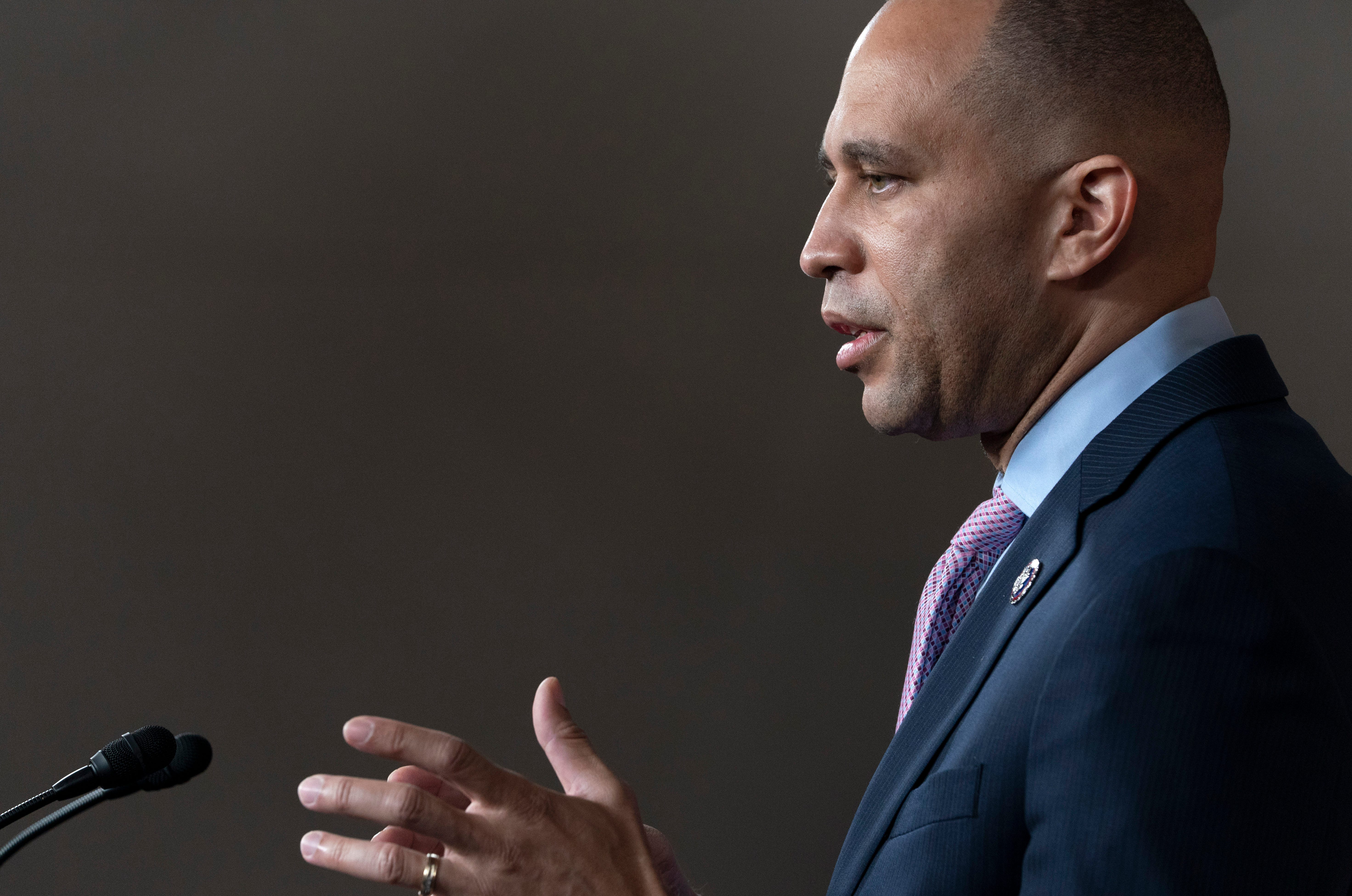 Rep. Hakeem Jeffries of New York on Tuesday blasted congressional Republicans for their opposition to two milestone voting-rights bills, while also questioning if their rejection of the legislation was rooted in former President Barack Obama’s victories in 2008 and 2012.

During a press conference on Capitol Hill, the House Democratic Caucus chair went after Republicans for their hostility toward the Freedom to Vote Act and the John Lewis Voting Rights Advancement Act — key pieces of legislation that the party hopes to pass in the face of near-certain Republican filibusters in the Senate.

“We are seeing a voter suppression epidemic taking place all across America,” Jeffries said. “And it didn’t have to be this way. We just marked the one-year anniversary of the January 6 insurrection. It was an inflection point in our country and for our democracy.”

He continued: “But instead of running toward democracy, which reasonable people on the other side of the aisle should have done, the vast majority of them have run away from our democracy. That’s why it’s under assault.”

President Joe Biden and Vice President Kamala Harris on Tuesday will give an address advocating for passage of the laws — which have been stymied in Congress for months and have served as a source of frustration for voting-rights advocates who spent the entirety of last year pushing for the bills to reach the president’s desk.

In his response, Jeffries directed his ire towards Republicans for opposing the measures.

“When did voting rights become such a partisan thing? Part of the Republican electoral strategy … their invidious quest for power. When did that happen?” Jeffries asked. “For the vast majority of the decades following the Voting Rights Act, initially signed into law in 1965, voting outside of the Deep South was largely something that was embraced by both parties.”

He emphasized: “In fact, every time the Voting Rights Act was authorized and signed into law — four times — it was signed into law by a Republican president.” Jeffries specifically noted that former presidents Richard Nixon, Gerald Ford, Ronald Reagan, and George W. Bush all signed into law reauthorizations of the 1965 legislation, which barred discriminatory voting practices in the US.

Jeffries then suggested that Republicans had a more unsettling motive for opposing the bills.

“What happened? Was it the election of Barack Obama?” he asked. “What happened that voting rights now is a partisan thing and Republicans are largely allergic to the notion of ‘one person, one vote,’ intent on suppressing the ability of people — particularly in certain communities of color — to participate in our democracy.”

Obama — the first Black president in US history — had a mostly rocky relationship with congressional Republicans while in office, despite his longstanding desire to create a less-divisive political environment.

In recent years, the parties have clashed on the role of government in elections. Democrats have been alarmed by the raft of restrictive voting bills that have emanated from statehouses since Biden’s victory as a result of former President Donald Trump’s debunked election claims, while Republicans insist their motivation for stricter voting laws is to restore confidence in the voting process.

The Freedom to Vote Act expands early and absentee voting, officiates Election Day as a federal holiday, and curbs voter purges, among other measures. The bill would also mandate that states offer same-day voter registration, a policy that is firmly opposed by most conservatives.

The House passed a previous version of the bill — the For the People Act — but it languished in the Senate and was retooled with the input of moderate Democratic Sen. Joe Manchin of West Virginia.

And the legislation named after the late Rep. John Lewis of Georgia — one of the country’s most revered civil-rights leaders — would restore voting-rights protections that were weakened in the 2013 Supreme Court decision Shelby County v. Holder.

Democrats need 60 votes to advance the bills in the 50-50 Senate — but Republicans have remained overwhelmingly opposed to the measures. And Manchin and Democratic Sen. Kyrsten Sinema of Arizona have dismissed calls to nix the filibuster to pass voting-rights legislation, stressing that such an action would only inflame partisan divisions.