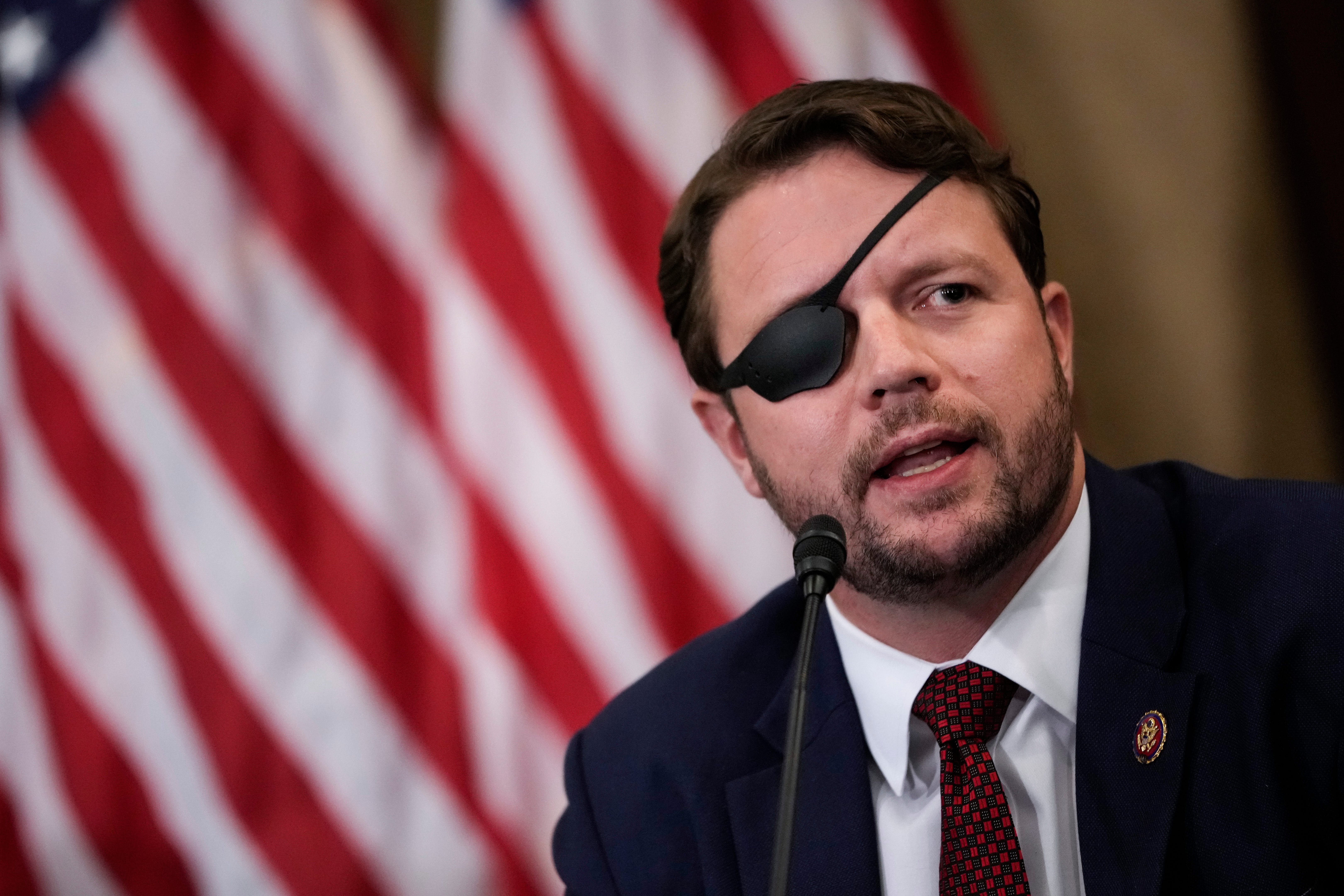 Republican Rep. Dan Crenshaw of Texas speaks during a meeting with House Republicans in Washington DC, on August 30, 2021.

Rep. Dan Crenshaw blasted fellow Republican Marjorie Taylor Greene as “a Democrat” or “just an idiot” after she told him to “stop calling himself conservative” for wanting the Federal Emergency Management Agency to help improve the COVID-19 testing process throughout the country.

With the rapidly-spreading Omicron variant of the coronavirus causing a public health emergency — featuring individuals waiting in lines for hours and sitting in long vehicle queues to get tested — everyone from President Joe Biden to members of Congress and local and state officials are seeking to find ways to mitigate the health risks of the highly-infectious disease.

Shortly before Greene’s personal Twitter account was permanently suspended on Sunday, she criticized Crenshaw on the social media platform after he suggested on a Thursday segment of the Fox News program “Fox & Friends” that FEMA resources could aid the American public during the current public health challenge.

“They should be using our resources to increase those supply chains to get those monoclonal antibodies out to people faster, and President Biden announced this — we just haven’t seen results from it, helping us get more health-care workers from the military or from FEMA to aid in some of these hospitals that are feeling a little bit overwhelmed,” the congressman said.

Greene, who has continually minimized the severity of COVID-19 and has been a staunch opponent of mask rules, expressed firm opposition to Crenshaw’s suggestion.

“No FEMA should not set up testing sites to check for Omicron sneezes, coughs, and runny noses and we don’t need FEMA in hospitals, they should hire back all the unvaccinated HCW [health care workers] they fired,” the Georgia Republican wrote. “He needs to stop calling himself conservative, he’s hurting our brand.”

Crenshaw — who has been highly critical of the ultraconservative Freedom Caucus which counts Greene among its members — criticized the congresswoman in an Instagram story.

“Hey Marjorie, if suggesting we should follow Trump policy instead of Biden mandates makes you mad, then you might be a Democrat – or just an idiot,” he wrote on his page. Greene also went after the Texas Republican on Sunday on Gettr, the conservative social media platform launched by Jason Miller, who was the chief spokesperson for former President Donald Trump’s 2016 campaign and a senior advisor for his 2020 campaign.

“Dan Crenshaw, who spends more time attacking America First Republicans because he (not so secretly) hates Trump, is talking about a bill to ‘hold Big Tech accountable!; but is the same type of toothless bill the Paul Ryan types try to sell to make it look like they’re doing something,” she wrote.

She continued: “There are many Republican bills on the issue but none of them have been passed. While we are in the minority, the most important thing we can do is show up and vote … Unfortunately, Dan doesn’t always walk in the chamber to vote to stop Dem bills, even when he’s in town.”

After Greene’s Facebook account was temporarily suspended for 24 hours on Monday, she also took to Gettr to rebuke what she said was “censorship” by the social media platform.

“Facebook has joined Twitter in censoring me. This is beyond censorship of speech. I’m an elected Member of Congress representing over 700,000 US tax paying citizens and I represent their voices, values, defend their freedoms, and protect the Constitution,” she wrote.

“I’ve drafted a bill that prohibits political censorship on social media by making changes to section 230,” he said in reference to the internet law that permits companies to moderate content on their sites. “Some of us in Congress actually put in the hard work to fix social media political censorship, doing the in-depth policy and legal research required to craft good legislation. Others just hurl petty insults to get your attention, and then tell you they ‘fight’ for you.”

He emphasized: “Starting to notice the difference?”