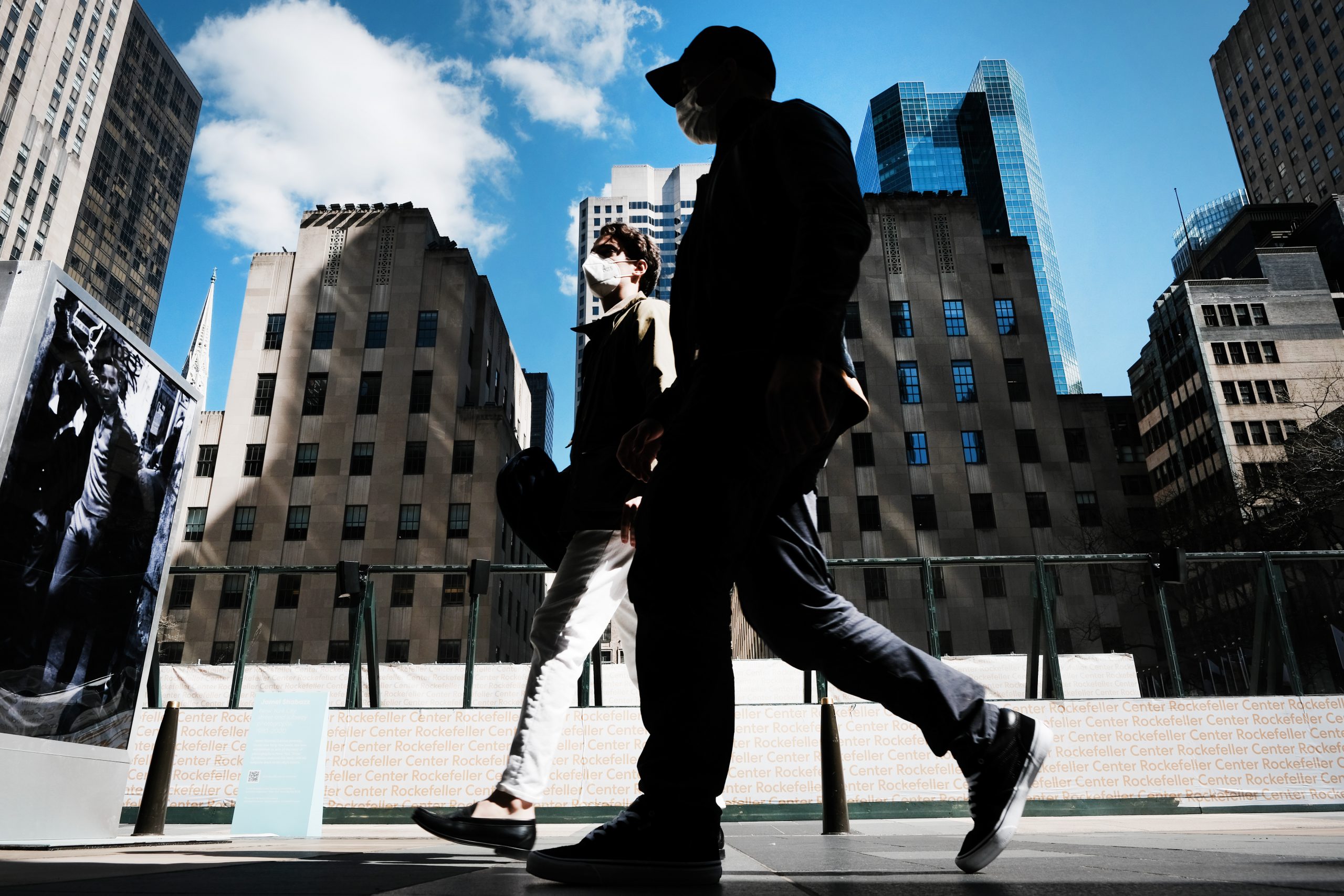 NEW YORK — As the Covid-19 pandemic hit New York City in the spring of 2020, a subsequent exodus of residents ushered in a seemingly new era for the city’s ever-turbulent rental housing market.

Landlords offered months of free rent in some of the priciest neighborhoods, amid grim predictions of long-term damage to the city.

It did not last.

As the nation’s largest city bounces back from the pandemic, a housing crisis decades in the making rages. Stories abound of apartment hunters fighting bidding wars and languishing in hourlong lines for packed open houses.

And after eight years of a former mayor who made affordable housing a cornerstone of his policymaking, rents are hitting new records every month. The Manhattan and Brooklyn skylines are swollen with new development, and yet Manhattan’s median price just reached $5,000 for the first time ever.

The causes are myriad: A long-simmering housing shortage, landlords making up for lost time and a migration back to urban living — all amid rising inflation. The issue could grow even worse now that the Federal Reserve has raised interest rates, pushing up home borrowing costs, and real estate experts say there’s no end in sight for New York’s housing crunch.

One real estate broker described “a frenzy” to find apartments, recounting one client scrambling to pull together a $3,000 offer on a $2,700 apartment — only to be outbid by someone willing to pay $3,200.

“People are starting to feel this kind of desperation,” said Anthony Flores, the real estate agent with the firm Casa Blanca. When apartments come on the market, “It’s like throwing raw meat in a pool of piranhas.”

Rental prices are up nationwide. But New York City is one of the most expensive places in the U.S., and its issues are deep-seated.

Housing development has lagged far behind population growth, largely due to restrictive regulations and high construction costs. The share of rent-burdened households paying more than 30 percent of their income for housing has steadily increased, while the number of apartments available at low rents has shrunk — leaving the lowest-income households with especially few options.

Tenants in rent-regulated units, which represent about half of the city’s rental housing stock, are also not immune: The board that annually determines how much to raise prices on these apartments voted in June to approve the highest rent increases in nearly a decade.

“The underlying reasons haven’t changed that much,” said Matthew Murphy, executive director of the NYU Furman Center and a former deputy commissioner in the city’s Department of Housing Preservation and Development. “But the narrative is appropriately exacerbated, because the landscape for finding market-rate rentals that are even available seems pretty grim.”

The mounting war over limited supply

Census statistics show roughly 300,000 New Yorkers left the city between April 2020 and July 2021. There’s perpetual construction in hot areas — like Long Island City in Queens and along the Brooklyn waterfront. And the city’s skyline is fundamentally altered from more than a decade of rapid growth.

But inventory has been slim for months, even though the number of available apartments is beginning to tick up. There were 13,933 rentals on the market in Manhattan in May, far below the 21,881 available in May 2019, according to a report from listing site StreetEasy. And while inventory is opening up, it’s not happening fast enough. The citywide median asking price hit a record $3,349 in May, the report said.

The number of vacant unavailable apartments increased between 2017 and 2021, according to the latest housing and vacancy survey — a study conducted every few years by the city’s Department of Housing Preservation and Development. Most of those apartments were categorized as being “held for occasional, seasonal or recreational use,” which includes second homes and apartments listed on short-term rental platforms like Airbnb. The city has, however, cracked down on short-term apartment listings in recent years.

Then there’s the rise of remote work. Renters who work from home are placing more value on their living space, and some are willing to pay extra for a home office or second bedroom, said Jonathan Miller, a real estate appraiser.

Remote employees who may not have otherwise moved to New York are now free to do so.

“There’s a real case to be made that work-from-home is a net attractor to New York, not a net detractor,” said Moses Gates, a housing and planning guru at the Regional Plan Association, a nonprofit advocacy group. “It lets the high-income person who doesn’t want to live in Tulsa move to New York.”

Miller said rising mortgage rates have made homeownership less attractive, pushing would-be buyers to rent. Compounding the issue: Owning a home is becoming increasingly impossible in the five boroughs, where the home ownership rate have fallen in the last decade as valuations soared.

The average price of Manhattan condos and co-ops in the second quarter of this year was $2.1 million, and the median was $1.2 million, according to the latest market report by real estate firm Douglas Elliman.

The more demand there is for rental housing — particularly from high earners — the more pressure there is on rents in an already strained market.

Miller — who writes the Elliman report that pegged the median rent for Manhattan at $5,000 in June — said the skyrocketing rents aren’t really an aberration, but rather a correction back to their pre-pandemic trajectory.

“If you drew a line from the end of ‘19 to now, it’s a consistent upward pattern that got interrupted by the pandemic,” he said. “I don’t think rent growth is indefinite, but I wouldn’t be surprised to see more growth this year, a continuation of this pattern.”

A 2019 Department of City Planning report found the New York metro area had gained nearly 363,000 more jobs than new housing units since 2001. Yet the metro region’s production slowed in the decade following the Great Recession compared to the 10 years prior.

Another report from the Real Estate Board of New York, a trade group representing the real estate industry, argued the city must dramatically ramp up housing production to keep up with job and population growth, finding a need for roughly 560,000 additional units by 2030.

Tight zoning restrictions, exceedingly high land and construction costs, outdated construction and building codes and a property tax system that places a high tax burden on rental buildings are all to blame.

The previous mayoral administration under Democrat Bill de Blasio carried out an ambitious plan to build or preserve 300,000 affordable homes by 2026, which included rezoning several neighborhoods for residential growth. But some argue the city hasn’t gone far enough, and builders must often seek zoning approvals. “The problem is there are too few lots or opportunities for potential development based on as-of-right zoning, and the city hasn’t really kept up with increasing capacity enough to meet demand,” said Sean Campion, director of housing and economic development studies at the Citizens Budget Commission, a nonprofit watchdog group.

The city’s suburbs have shown little interest in addressing the issue.

The City Planning report found that the five boroughs and northern New Jersey had produced most new housing over the last decade, while the rest of the region — including Westchester County, southwest Connecticut and Long Island — produced very little.

“A lot of the major developers in New York have moved across the river to Jersey City. It’s easier to build in,” said Fulop, a Democrat who criticized de Blasio for not being sufficiently pro-growth. “We’re filling the buildings up as quickly as we’re building them.”

How the city has missed the mark

De Blasio’s housing plan generated a significant number of units, but critics say too few were for very low-income households.

“To the extent that it’s true that if you add new high-cost housing it filters down, it’s definitely not happening fast enough to do much about the rent increases we’re seeing now,” said Samuel Stein, a researcher at the Community Service Society, a nonprofit that advocates for low-income New Yorkers. “That should shift our focus to producing housing in that range where there’s very little slack.”

“Renters at the lower end of the spectrum have been getting squeezed for years and we’ve all observed this glut of luxury housing being developed,” said Rachel Fee, executive director of the advocacy organization New York Housing Conference.

As city government has poured resources into subsidized housing in recent years, larger trends like slow wage growth and widening income inequality have made it difficult to move the needle.

“You build a ton of housing and rich people get that much more purchasing power,” Gates said.

The state stands idly by

Policy fixes championed across the political spectrum have struggled to gain traction among state lawmakers in Albany.

Recent proposals to lift restrictions on residential density in New York City and restrict rent increases in market-rate apartments both died in the state legislature this year.

Meanwhile, state legislators declined to extend a controversial tax-exemption program for rental housing called 421a — despite warnings from the real estate industry, New York Gov. Kathy Hochul and Mayor Eric Adams that production would grind to a halt without a tax break. Legislators who opposed the extension argued the program was too generous to developers and produced too little affordable housing. California, which has a similarly severe housing crisis, has done more at the state level to boost supply and prevent extreme rent increases. The state recently approved measures to reduce environmental review requirements on upzonings in areas close to jobs and transit; allow multiple homes on previously single-family lots; and block rent increases above 10 percent in buildings that are at least 15 years old.

Hochul, a Democrat, backed proposals to allow development on single-family lots and encourage transit-oriented development in suburbs in her initial proposed budget in January. But she backtracked after fierce pushback from suburban lawmakers.

“All the ways that communities have restricted production really are hampering our metropolitan area’s ability to produce enough housing,” said state Sen. Brian Kavanagh, who represents parts of Manhattan and Brooklyn, and chairs the body’s housing committee. “We’re one of the few states that have not done a substantial intervention into the land use and zoning restrictions, one of the few states that has that kind of hot housing market like New York that hasn’t taken those steps.”

Ry Rivard contributed to this report.