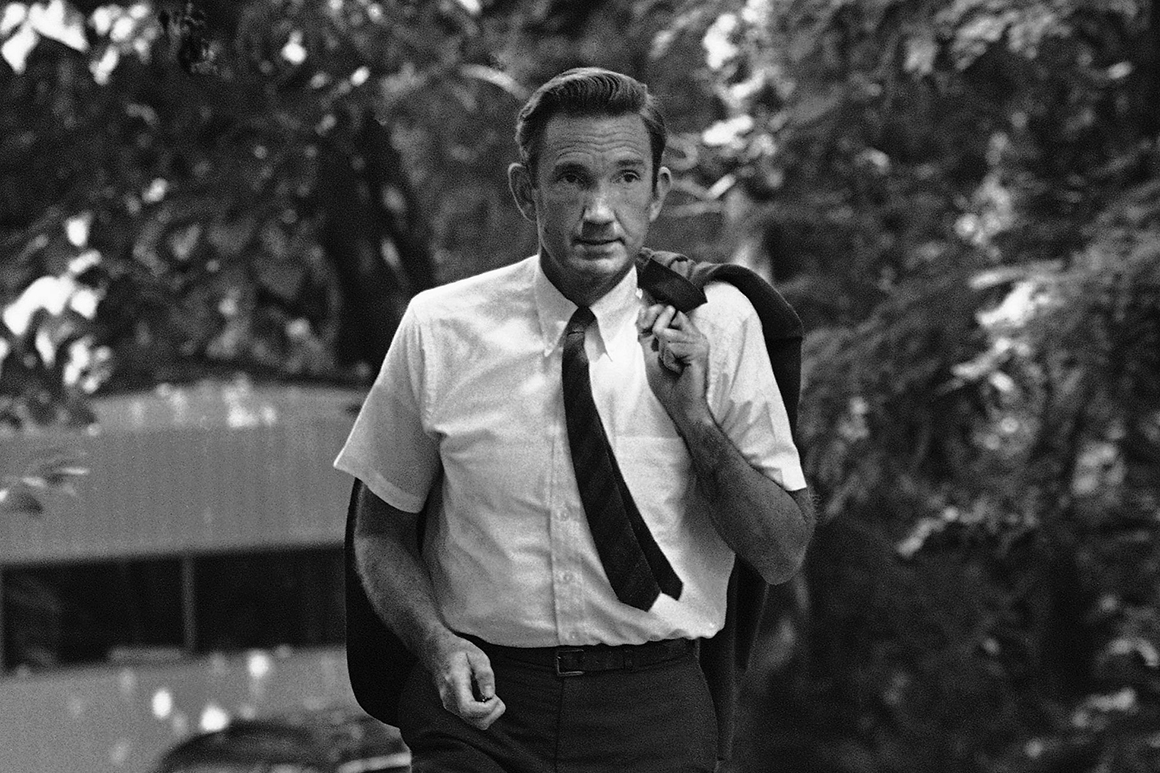 Ramsey Clark, who died in April at the age of 93, lived long enough to embody the whole long decline of establishment liberalism — from a movement ready and eager to transform American life at home and police the world to a brand of progressivism that ultimately renounced any American claim to moral authority.

Clark hailed from a family of prominent Texas lawyers, including his father, Tom Clark, a Supreme Court justice. Nonetheless, Ramsey dropped out of high school at 17 to join the Marines during World War II. After the war (and college and law school), he joined his father’s law firm, and also established the first legal aid society in Dallas. He went on to serve in the Kennedy and Johnson Justice Departments, where he took up an array of good causes: fighting to protect natural resources and civil rights marchers, helping to desegregate Southern school districts, and supervising the drafting of the 1965 Voting Rights Act. Robert Kennedy nicknamed Clark “the preacher,” for his refusal to use wiretaps in criminal investigations.

The peak of Clark’s establishment career came when President Lyndon B. Johnson made him attorney general in 1967, at just 39. Tom Clark resigned from his Supreme Court seat, ostensibly to avoid a potential conflict of interest. (As it happened, this also gave Johnson the opportunity to appoint Thurgood Marshall as the first Black justice in court history — something that should have happened years before.) Ramsey Clark, meanwhile, proved to be an able, principled attorney general, who supervised the drafting of the Fair Housing Act — the last, major civil rights bill of the Johnson administration.

Clark supposedly fell out with Johnson over Vietnam — though this has been much disputed — and Republicans targeted him for one of their patented, election-year smear campaigns as “soft on crime.” Johnson was said to have blamed Clark for Richard Nixon’s election in 1968. But once out of office, Clark seemed liberated, testifying for the Chicago Seven and defending the peace activists Father Philip Berrigan, Native Americans in Alaska, a prisoner in Attica, a student at Kent State and the Black Panthers. He quit his big partnership in New York to teach law at Howard and Brooklyn College.

“I didn’t feel like working on things I didn’t believe in,” he said at the time. “I didn’t think were important.”

This was a record of courage. But somewhere along the way, courage turned to caricature.

In 1972, Clark made a pilgrimage to Hanoi and was suckered by the regime there into reporting that American POWs were being treated well. “They could not be better,” he said of their living conditions on a radio broadcast, remarking that he was “particularly touched” by how good their medical and dental care was. He claimed he was given unfettered access to North Vietnam, and photos from his visit show Clark, a tall, gangly man, hiking along in an oddly juvenile, striped shirt that made him look like a character out of a Peanuts comic strip.

Once back in the United States, Clark moved on to the next station of the morally superior progressive: quixotic political campaigns that always privilege the perfect over the good. He lost one Senate run decisively, seeking one of New York’s seats. Yet he insisted on running again, in the 1976 Democratic Senate primary — in which he drew just enough votes to cost Bella Abzug a razor-thin loss to Daniel Patrick Moynihan, the most conservative candidate in the race.

Clark moved back to international relations in 1979-80, when President Jimmy Carter asked him to help secure the release of the U.S. hostages in Iran. Clark ended up exasperating everybody: demanding the hostages’ release, advising Iran to sue America over past wrongs, emerging at one point to opine that Shakespeare could not hold a candle to the greatest Persian poets.

Over the next four decades, Clark did everything he could to defend in court or publicly embrace the worst people in the world: Saddam Hussein; Charles Taylor, the murderous Liberian dictator; Muammar Qaddafi; the regimes of North Korea and Sudan; Manuel Noriega; Bernard Coard, who led the violent 1983 coup in Grenada; the Branch Davidians; the PLO terrorists on the Achille Lauro; a pair of Nazi war criminals resisting extradition from the U.S.; Sheikh Omar Abdel-Rahman, mastermind of the 1993 bombing of the World Trade Center; President Bashar Assad of Syria; Elizaphan Ntakirutimana, an organizer of the Rwandan genocide; Slobodan Milosevic and Radovan Karadzic; the Gold Dust twins of Bosnian genocide. Even Lyndon Larouche.

The fervor with which he sought out and excused such figures — many of them stone-cold killers — baffled even those who had stood up with him for unpopular causes and individuals in the past.

“A fair trial in this case is absolutely imperative for historical truth,” Clark typically said in defending Hussein. Yet his defenses of such individuals and regimes were about much more than a concern with due process. He eulogized Milosevic at his funeral and seemed genuinely to befriend Hussein — praising both men as “courageous enough to fight more powerful countries.” At the same time, he accused the United States and Israel of genocide; called for both Presidents Bush and members of their administrations to be put on trial for “crimes against humanity”; claimed the United States was starting “a new Cold War” against Russia; and demanded the dissolution of NATO.

It was a citizen’s “highest obligation” to speak up when his government was wrong, and “not point a finger at someone else,” he liked to claim.

Yet, it was as if, in having discovered that America could be wrong, Clark convinced himself that all of its enemies were right. Some have attributed Clark’s apparent evolution to a sense of guilt over his father’s ancillary role in the internment of Japanese-Americans during World War II, or to his not having done more to oppose the Vietnam War when he was attorney general. An almost affectedly humble, soft-spoken, good-humored man, Clark also suffered real tragedies in his life. A son, Tom, an environmental lawyer, died of cancer at 59. A daughter, Ronda, was born severely disabled; Clark was devoted to her, calling her, “a great teacher” who “has shown us the importance of patience, of discovery and love.”

This is a wonderful lesson for a parent to take from a formidable burden, but it is not one that necessarily applies to the outside world.

“At some point along the way, I just stopped believing in punishment,” Clark told John H. Richardson for an Esquire profile in the midst of Hussein’s trial, suggesting instead that “you have to deal with them in a way that shows you recognize their common humanity, that you’re concerned about their dignity, that you want a good life for them. … And you try to know thyself — is there something that we’re doing that is possibly causing this?”

The implication here that all evil in the world stems from America is all too common in progressive circles these days — and just as solipsistic as the belief that we can do no wrong. It is also a claim that stops a good way short of justice which, for Ramsey Clark at least, used to be the point.