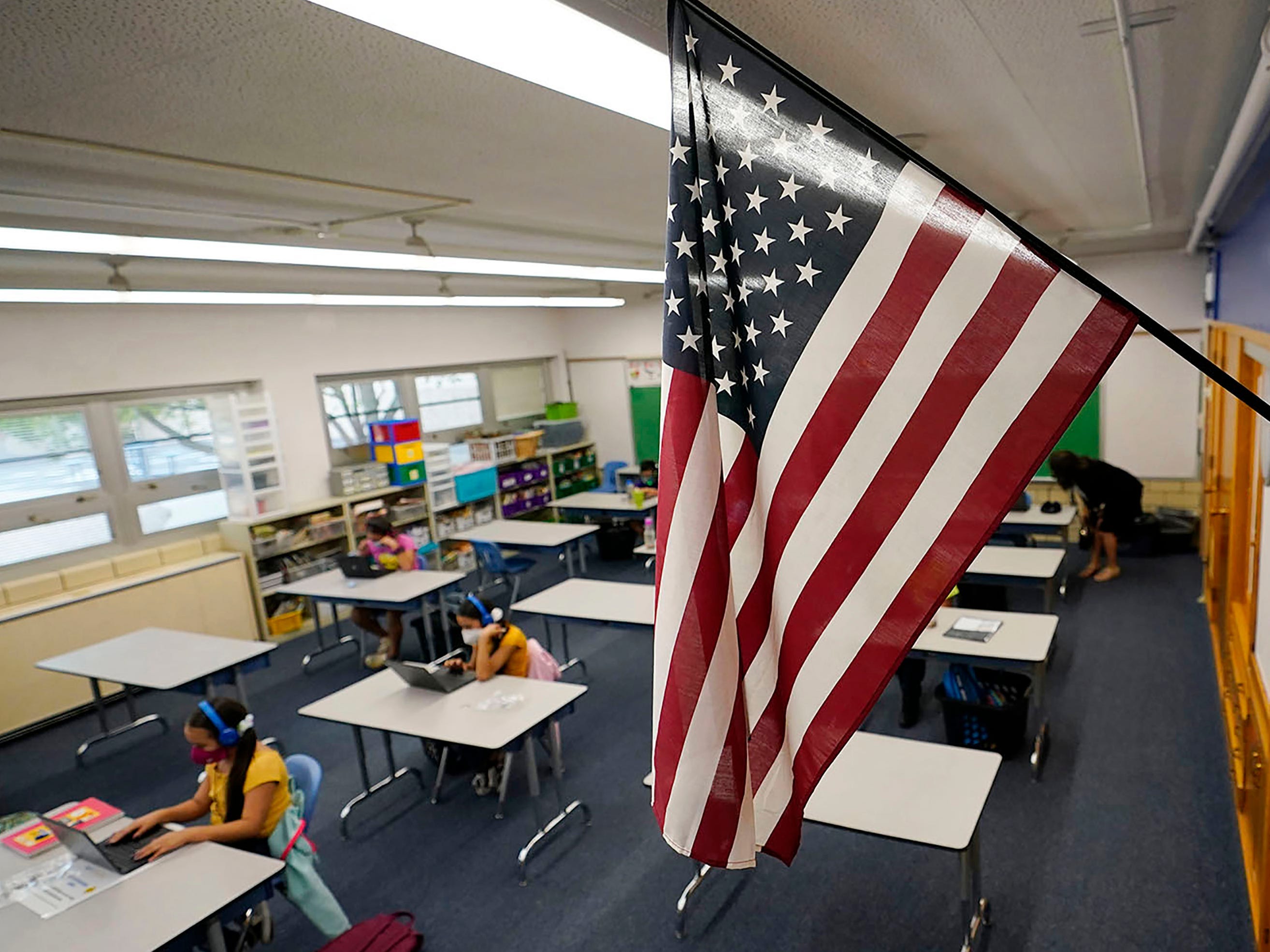 Republicans are seizing on a new target in education culture wars: Action civics.

It’s a term that has been around for a while but it’s increasingly getting more attention, especially as the 2022 campaigns start to kick into high gear and conservatives tap into parents’ fears about what’s taught in schools.

Action civics goes beyond traditional civic education. It calls for participating in the political process, which has led to anything from students advocating for fellow students who are hungry or experiencing homelessness — or raising awareness about LGBTQ issues, protesting climate change, or staging walkouts to protest gun violence.

To conservatives, action civics is another form of left-wing “indoctrination,” similar to their view of critical race theory, the college-level study of racial bias that they believe – despite educators’ denials – has crept into K-12 teaching. And they’re working to keep it out of their classrooms.

And South Dakota Gov. Kristi Noem, a potential 2024 presidential contender, released draft legislation this month to block action civics as the basis of education, saying students should not be “forced to choose one political ideology over another or be forced to protest or lobby as part of their education.

“In South Dakota, we will focus on education, not indoctrination,” she continued.

Elizabeth Clay Roy, CEO of Generation Citizen, said that characterization isn’t correct. Her organization, which provides schools in several states with an action civics curriculum, and teachers using the program are “issue-neutral,” she said. Students define the projects, she said, and the program provides the students with both core civic knowledge and skills to affect change.

“The approach really deepens critical thinking and civil discourse skills through action,” she told Insider. “It’s not indoctrination and they’re not being forced to protest or lobby at all.”

How does it work?

Students participating in Generation Citizen’s program are encouraged to research community problems grounded in data, Clay Roy said. They try to address the root cause of an issue and invite feedback from other students. Depending on the issue, she said, they may make their case to a principal, the city council, or a parks and recreation department.

The organization’s work in Texas, however, has changed since the enactment of the new law there, she said. “We engage in simulation of civic engagement,” she said. “Our students’ focus is school-based, and looks very similar to a student council.” Why conservatives are worried

A 2020 review by the Texas Public Policy Foundation, a conservative think tank, said  “even a cursory glance” at a list of 27 projects listed on Generation Citizen and its allies’ websites “reveals a progressive bias” in the assumptions underlying many of the projects. The topics list includes raising the minimum wage, putting body cameras on police officers, and protesting climate change, to name a few.

“When ‘action’ proceeds instead from unexamined assumptions, the result is not learning, but indoctrination,” author Thomas K. Lindsay wrote.

Other conservatives have been raising alarms, as well.

Stanley Kurtz, a senior fellow at the Ethics and Public Policy Center, for instance, warned in January 2021 that widespread adoption of action civics “will definitively politicize an already politically tainted K-12 educational system, irrevocably cementing the partisan Left’s hold upon our culture.”

Some of the activities involve walkouts, sit-ins, or advocacy on subjects such as gentrification without including multiple perspectives, Jonathan Butcher, an education fellow at The Heritage Foundation, told Insider. At a time of debate over whether public school curricula reflect the values of parents in a community, he said, many action civics projects reflect values or policies “on the left side of the spectrum.”

“A lot of them have to do with either transgender issues or support for you know, the teaching or acceptance otherwise of homosexuality in classrooms,” said Butcher, who has written about the subject. “That’s pretty prevalent. There are some climate change things…There’s also, I think, pretty restrictive positions on guns.”

One group with ties to the Donald Trump allies Newt Gingrich and Ben Carson supports the pairing of laws to ban both critical race theory and action civics. Adam Waldeck, president of 1776 Action, called the legislation in Texas a “breakthrough bill,” spurring momentum in other states, in an open letter urging Gov. Greg Abbott’s signature in June.

“Between teacher bias, peer pressure, and the biases of the Leftist non-profits that promote ‘action civics,’ students are pushed into Leftist political activity in a manner that profoundly violates the principle of political neutrality incumbent upon schools,” Waldeck wrote.

‘A sense of active patriotism’

Action civics is teaching students about activism before giving them a good understanding of civics in the United States, Butcher told Insider. He pointed to disappointing test scores in The Nation’s Report Card, which found in 2018 about 76 percent of eighth-grade students performing at or below a basic level on the civics assessment.

But similar to a science class, Clay Roy said, quality civics education benefits from including an action component. “You don’t just learn a bunch of vocabulary and the dates when concepts were discovered. You learn how science works in the real world, right?” she said.

The experience of trying something unlocks additional learning in civics, just as with science, she said. Seeing how civics works in the real world supports students’ academic learning while making them feel more connected to their community, she said.

“They feel a sense of active patriotism because they know that they can have a hand in shaping their community in a way that makes them feel good about it,” she said.