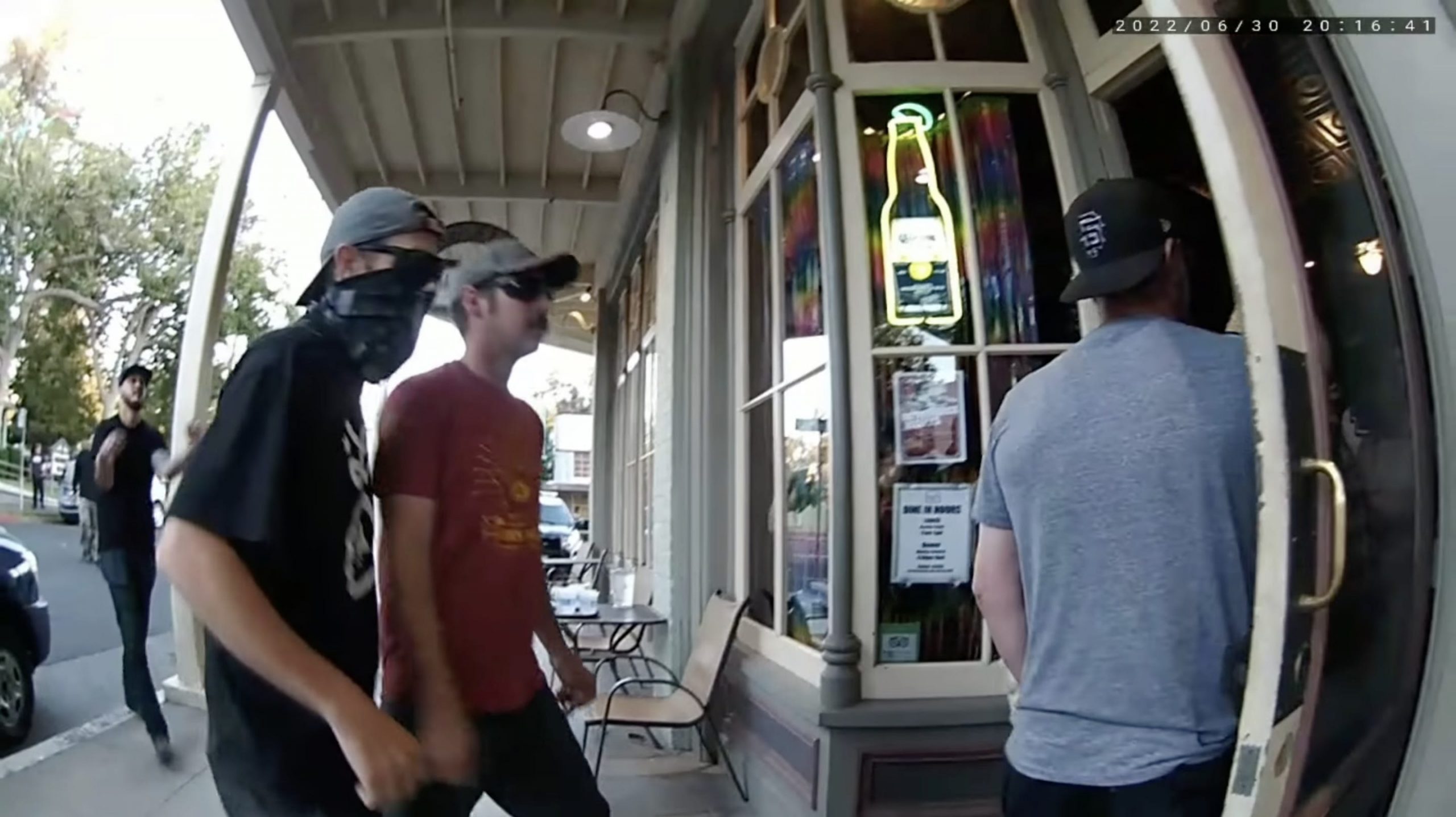 A screen-grab from footage of a police officer’s body-worn camera, before a group of suspected Proud Boys were pepper-sprayed for disrupting a Woodland, California drag show.

A group of suspected  far-right Proud Boys was pepper-sprayed after they yelled slurs and tried to force their way into a drag show in Woodland, California, on Thursday night.

The Woodland Police Department released footage from an officer’s body-worn camera that shows the men trying to storm Mojo’s Lounge & Bar before being pepper-sprayed by someone inside. (Video of the incident begins at the 2:03 mark).

Multiple media reports suggested they were suspected members of the Proud Boys, but authorities have not confirmed or denied this. Several men can be seen wearing hats, sunglasses, and balaclavas.

The Woodland Police Department said in a statement on Facebook that the agitators were “making derogatory comments about the event and the LGBTQIA+ community.”

No arrests have been made yet, but authorities said they continue investigating.

In videos posted on social media of the incident, the men can be heard shouting obscenities and accusing those at the bar of preying on children.

In one video, the agitators yell: “How many kids are in there? How many fucking children do you have in there?” In another, a man uses a megaphone to call for those in the bar to be arrested for pedophilia.

The comments are in line with a right-wing disinformation campaign to associate gay and transgender people with predatory behavior and pedophilia, which has led to drag shows and LGBTQ events becoming a target of right-wing groups like the Proud Boys. A counter-protester wearing the yellow and black colors and insignia of the Proud Boys outside the National Rifle Association annual meeting in Houston, Texas on May 28, 2022.

In recent weeks, alleged members of the Proud Boys stormed a drag queen story time event at a San Lorenzo library, as well as in Nevada. Last month, 31 extremist Patriot Front group members were arrested outside an Idaho Pride event.

Posts threatening violence at the Woodland drag queen happy hour began circulating on social media after the far-right Twitter account Libs of TikTok, which has 1.3 million followers, shared a flier advertising the event in June, according to The Sacramento Bee.

NorCal Resist, a grassroots activism group that monitors activity from far-right groups on encrypted messaging services like Telegram, posted a warning on social media that members of the Proud Boys planned to disrupt the event, the paper said.

The bar decided to cancel the event hours before it was due to start on Thursday, citing safety concerns.

However, it was still full of patrons who had come to celebrate the last day of Pride month, with some drag queens performing an impromptu show, the bar owner told The Sacramento Bee.

“Everyone was taking pictures with the drag queens and just having a great night,” Christy Hayes, the bar owner, told the paper.

“Everyone was so excited because tensions were high. Everyone was worried that the Proud Boys, the disrupters, or whatever they want to call themselves would show up.”

“All we can hope from this is that maybe we can identify one or two of them to add to the list because their aggression is only going to get worse,” Hayes said. “And eventually, someone is going to get seriously injured.”

New Zealand has designated the Proud Boys and The Base as terrorist organizations.

“These are white supremacist terrorist groups, and we don’t believe, and I don’t think New Zealanders believe that any New Zealander should be enabling and supporting them,” Police Minister Chris Hipkins said at a news conference on Thursday during which the designations were announced, VOA News reported.