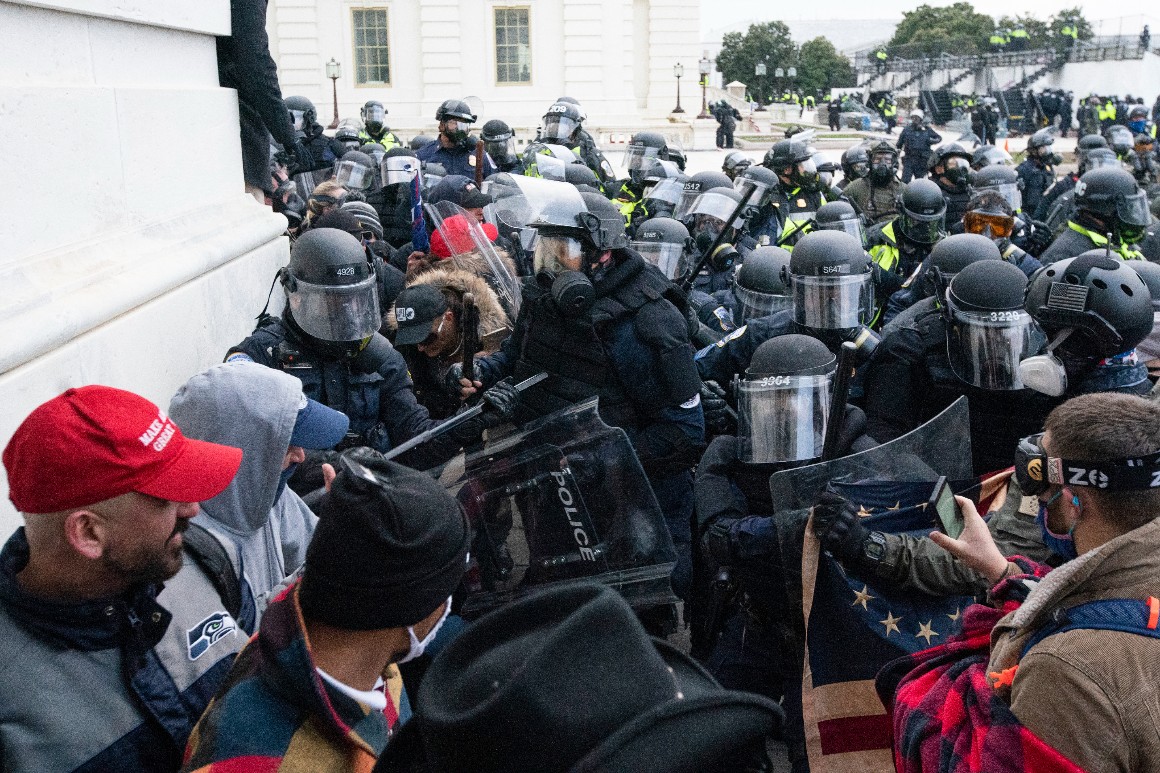 Three more police officers who responded to the Jan. 6 attack on the Capitol — including two who aided the evacuation of lawmakers — have sued Donald Trump, seeking damages for their physical and emotional injuries.

A Capitol Police officer who defended lawmakers in the House chamber during the violent Capitol assault filed the first of two new lawsuits against Trump on Tuesday, asking a court to hold the former president responsible for the mob of his supporters who conducted the attack. The other lawsuit was filed by two officers with the Metropolitan Police Department who were called in to help the Capitol Police during the insurrection.

In a 49-page lawsuit filed in federal court in Washington, D.C, Capitol Officer Marcus Moore, a 10-year veteran of the force, described the intense terror of the day as he moved from his post at the Madison Building to the East Side of the Capitol and eventually into the House chamber, helping evacuate lawmakers to safety.

He’s seeking a judgment against Trump and compensatory damages, saying explosions inside and outside the building left him with tinnitus. He also indicated he witnessed one rioter inside the Capitol armed with a gun.

Moore is one of hundreds of Capitol Police officers who describe themselves as traumatized by the violence at the Capitol and who have continued to pinpoint Trump — and his monthslong campaign to overturn the 2020 election results — as the source of that day’s violence. He’s also the tenth officer to sue Trump and accuse him of instigating the attack. Two officers, James Blassingame and Sidney Hemby, filed suit against Trump in March. Another seven filed suit in August.

Like Blassingame and Hemby, Moore is backed by a team of lawyers led by United to Protect Democracy, a nonprofit founded by a former Obama White House counsel that has challenged many Trump-era policies and actions.

In a second lawsuit filed Tuesday, two officers with the Metropolitan Police Department — Bobby Tabron and DeDivine Carter — described suffering physical assaults with poles, pepper spray and other projectiles, in addition to hand-to-hand violence. They are also seeking compensatory damages for their injuries.

Both responded to the West Front of the Capitol, where some of the most intense fighting of the day occurred. Carter, too, described seeing rioters armed with guns, among other weapons. Tabron later joined officers helping evacuate lawmakers via an underground tunnel “where trains were being used to evacuate members of Congress from the Capitol.”

“Officer Tabron was fighting for his life and felt certain he would not survive to make it home alive to his wife or see his family again,” the lawsuit reads. “He wondered when gunfire would erupt and how such a battle, if started, would end.”

In his lawsuit, Moore described hearing the gunshot that killed Trump supporter Ashli Babbitt just outside the House chamber — a sound he said led him to “instinctively” draw his own weapon “certain he was going to end up in a gun battle.”

His lawyers say he remained at the Capitol until 10 p.m. The attack has caused him to suffer from “depression that he could not address,” his lawyers wrote, because he was dedicated to his job and the attack occurred at his daily workplace.

“He continues to suffer a severe emotional toll in the wake of the January 6 insurrection,” according to the suit. “He is haunted by the memory of being attacked, and of the sensory impacts — most particularly the explosions of flashbangs and other devices, as well as the sights, sounds, smells, and even tastes of the attack remain close to the surface.”

Trump has sought to downplay the violence that occurred on Jan. 6, claiming his supporters were “hugging and kissing” police and that “the real insurrection” happened on Nov. 3 — the day he lost the election to President Joe Biden.