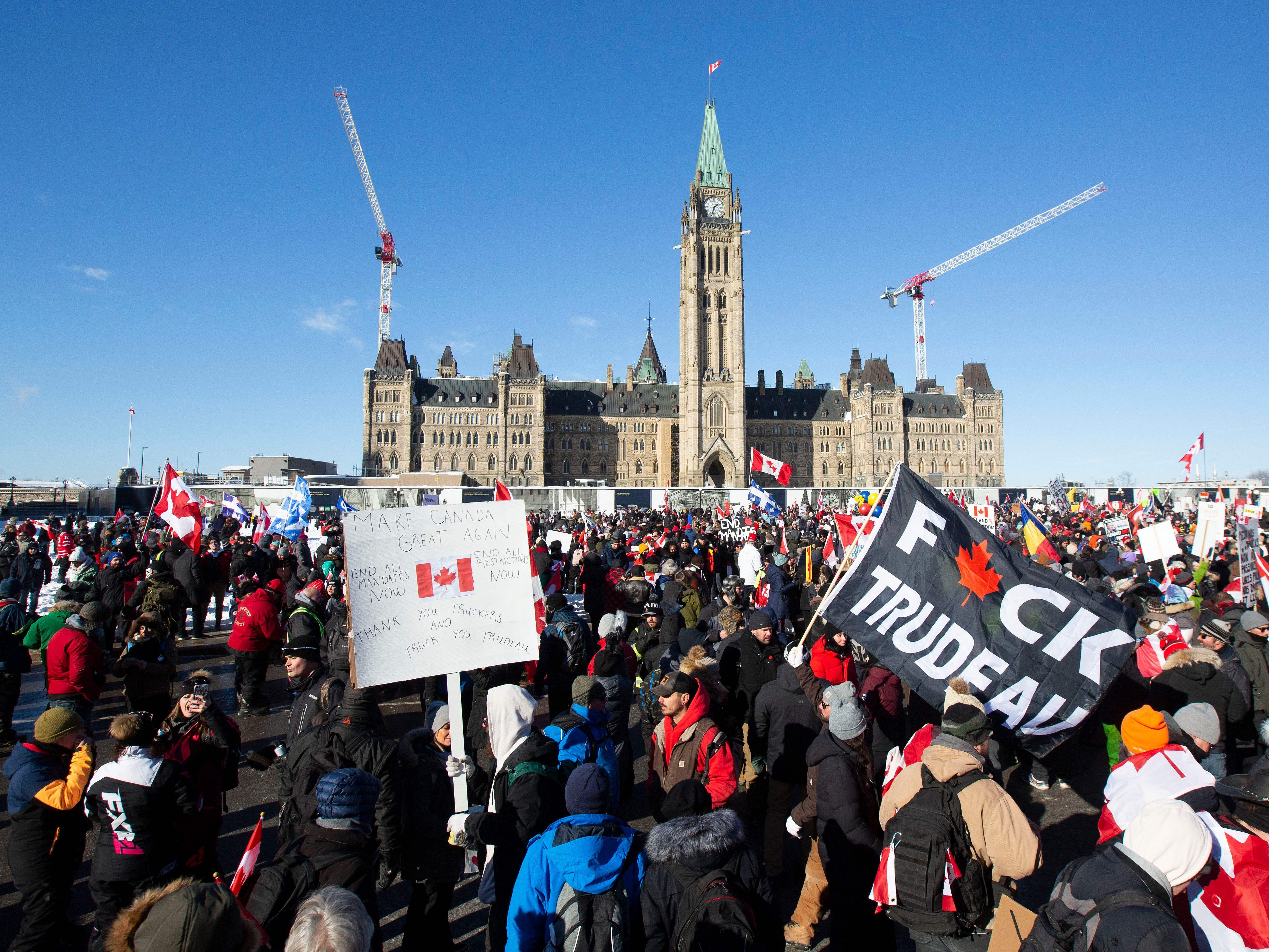 Supporters arrive at Parliament Hill for the Freedom Truck Convoy to protest against Covid-19 vaccine mandates and restrictions in Ottawa, Canada, on January 29, 2022. – Hundreds of truckers drove their giant rigs into the Canadian capital Ottawa on Saturday as part of a self-titled “Freedom Convoy” to protest vaccine mandates required to cross the US border.

Ottawa Police Board Chair Diane Deans said that Sloly is “no longer employed” during the Ottawa Police Services Board meeting on Tuesday. She said that Officer Steve Bell will act as interim chief until a replacement can be found.

CBC News was the first to report Sloly’s decision and cited multiple sources familiar with the matter who said the police chief has been accused of bullying and behavior that hurt the police force’s ability to respond to the trucker protests.

A spokesperson from Ottawa Police Service did not respond to a request for comment from Insider.

On Monday, Canadian Prime Minister Justin Trudeau invoked emergency powers for the first time in Canada’s history in response to the protesters who call themselves the “Freedom Convoy.” The Emergencies Act allows the government to temporarily override civil rights to break up the blockades of protesters who have flooded Canada’s capital and taken up blockades across the country.

“We need law enforcement to take the reins, to utilize the Emergencies Act and to enforce,” Trudeau said in a press conference on Monday. “We have given new powers to police and we need them to do the job now.”

Over the past week, Canadian police have taken further steps to impede protesters from seizing food and fuel in Ottawa to launching more than 60 criminal investigations into incidents, including “the desecration of the National War Memorial” as well as the appearance of Nazi and Confederate flags. On Monday, the Royal Canadian Mounted Police (RCMP) said they had arrested over 11 people and dozens of guns from a group in Coutts, Alberta who RCMP said was willing to “use force against police if any attempts were made to disrupt the blockade.”

Ottawa Mayor Jim Watson has repeatedly warned that the protests are overwhelming the police department. Last week, Watson said during a radio interview on Sunday that “the situation at this point is completely out of control” as hundreds of trucks and thousands of protesters filled the capital streets. Watson said the protesters greatly outnumber Ottawa police officers — many of whom have been working 18-hour shifts and haven’t had a day off since the protests started.

The Freedom Convoy has clogged city streets in Ottawa since convoys of truckers began rolling into the capital on January 21. Last week, members of the group blocked a vital bridge between Detroit and Canada, snarling international trade. Since, the protests have spread throughout the province into Windsor and Sarnia.

Canada’s vaccine mandate for truckers went into effect on January 15. The new rules require US truckers to present proof of vaccination to cross the border and unvaccinated Canadian truckers to get a COVID-19 test and quarantine when they reenter from the US. The US imposed a similar mandate on January 22.