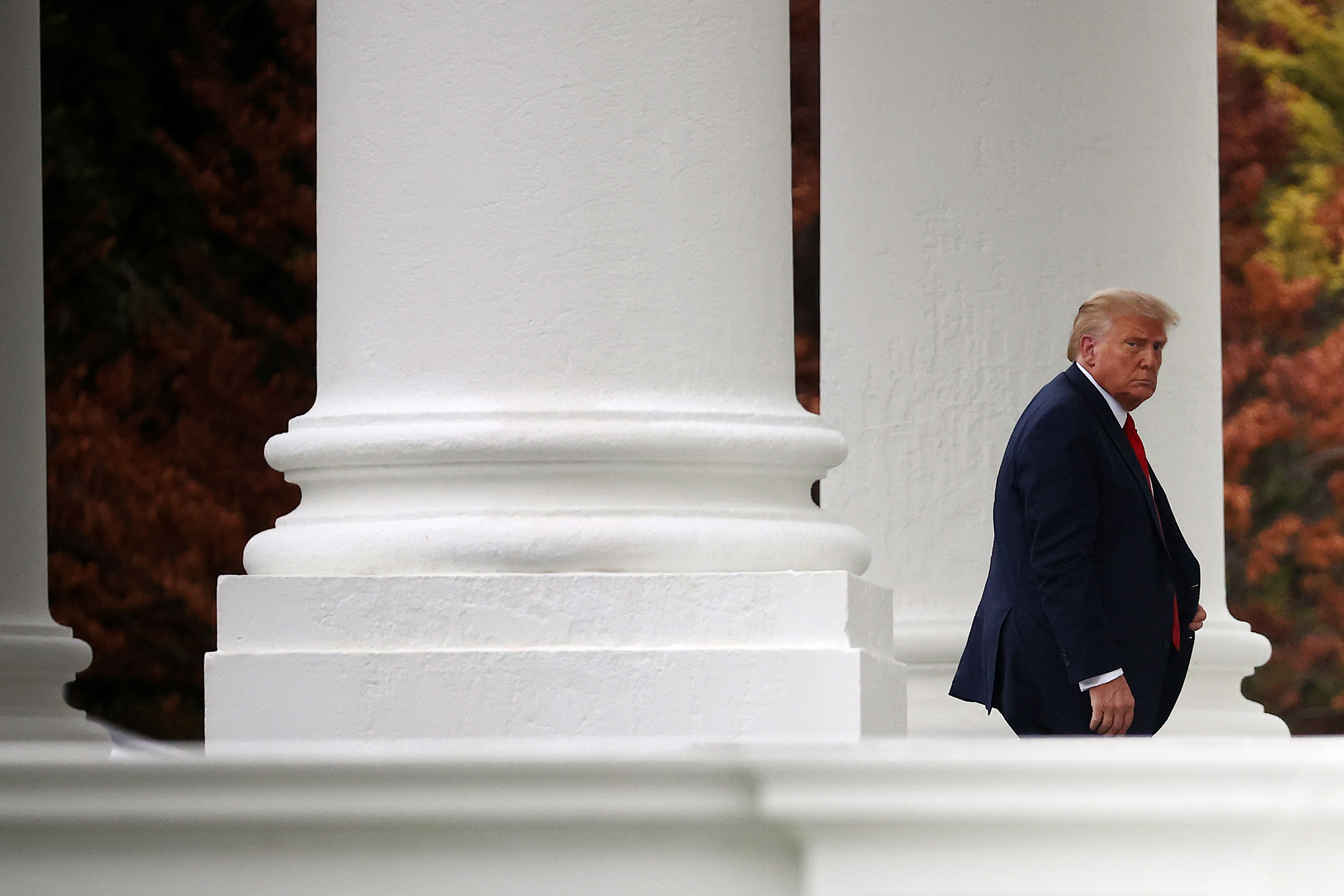 Much of the discussion surrounding the ongoing work of the Jan. 6 select committee has focused on whether its investigation will result in criminal prosecution of Donald Trump for his role in inciting the attack on the Capitol.

But recent remarks from a key member of the committee, Rep. Liz Cheney (R-Wyo.), indicate that the committee has an overarching goal of ensuring Trump never occupies the Oval Office again — one that might be achieved by different means.

Is it “the consensus view of the committee,” CBS’s Margaret Brennan asked Cheney recently, that “criminal culpability for the president” is possible?

“I think one of the really important things that our committee has to do is lay these facts out for the American people,” Cheney responded, “…so that they inform us in terms of our legislative activity going forward” (emphasis added).

Cheney’s reference to “legislative activity” is telling. While many have expressed frustration that Attorney General Merrick Garland has not yet charged anyone who might have fomented the riot from inside the government, Cheney’s remarks remind us that Congress has a powerful tool at its disposal to hold former officials such as Trump accountable. And it might be more effective than any potential criminal prosecution. It’s legislation.

What Cheney and her congressional colleagues might have in mind is the 14th amendment, which was ratified in 1868 after the Civil War to prevent former Confederates from holding state or federal office and thus disrupting the fragile Reconstruction effort.

Cheney’s colleague on the committee, Maryland Democratic Rep. Jamie Raskin, specifically invoked the 14th amendment in remarks to POLITICO this week, calling its use “a live proposition.”

This idea has come up before. In the immediate aftermath of the attacks, scholars and legal experts floated the idea of using this part of the Constitution to do what impeachment ultimately failed to do — permanently bar Trump from holding elected office. But that option seemed to lose some of its appeal as Republicans and Democrats resumed their partisan crouches and major domestic legislative initiatives took center stage.

Now, as the Jan. 6 committee aims for a series of public hearings in the spring — and even some members of the GOP appear to be open to some aspects of election reform — it’s worth revisiting this legislative avenue, and whether the damning revelations already unearthed by the committee’s investigation have sufficiently changed the political landscape within Congress that passing such a law might now be possible — maybe even preferable.

There are actually two sections in the 14th amendment that come into play.

The first, Section 3, provides: “No person shall … hold any office, civil or military, under the United States, or under any state, who, having previously taken an oath … to support the Constitution of the United States, shall have engaged in insurrection or rebellion against the same.”

The second relevant part, Section 5, states: “The Congress shall have the power to enforce, by appropriate legislation, the provisions of this article.” This is important. It gives Congress express constitutional authority to pass legislation implementing a ban on insurrectionists holding office, rather than requiring Congress to fall back on other powers — such as its power over interstate commerce — that are more general and thus less focused on the task at hand. For example, Congress’ power to gather information as part of its legislative efforts is not express but implied in the Constitution, thus opening up for debate the Jan. 6 Committee’s subpoena power. But Section 5 is crystal clear: Congress can pass legislation to keep anyone who engaged in insurrection or rebellion out of public office.

The tricky question for Section 3 of the 14th Amendment concerns implementation: What legislation could Congress conceivably pass that might successfully operate, in Cheney’s words, “to ensure that Donald Trump is not the Republican nominee and that he certainly is not anywhere close to the Oval Office ever again”?

The most conspicuous option would be to pass a law creating a civil cause of action enabling, say, a competing candidate to file suit seeking an injunction against Trump if he chooses to run for office. In that lawsuit, Trump’s role in Jan. 6 presumably would be litigated under criteria that Congress would establish in the legislation. Hypothetically, for example, Congress could enable any registered candidate for state or federal office, with reasonable cause to believe that a competing potential candidate has engaged in any act that would constitute insurrection or rebellion against the United States, to bring a civil action for injunctive relief (including a preliminary or permanent injunction) restraining the person from running for the same office.

Congress already took a similar step by enacting the Civil Rights Act of 1870 (also known as the Enforcement Act or the First Ku Klux Kan Act), which makes it a criminal misdemeanor to run for office when ineligible to do so under Section 3, and allows federal prosecutors to forcibly remove offenders from office. It has rarely been used, however. In 1871, a federal court in North Carolina assessed an indictment against a defendant who accepted a post as sheriff after the Civil War but had served as a county constable during the rebellion. The question for the jury was whether “he engaged subsequently in rebellion or insurrection?” The defendant claimed he did not willingly join the Confederate Army but “was overcome by force, which he could not resist.”

In theory, the Justice Department could bring such a charge against Trump (if he in fact runs for office) but that would do nothing to stave off his candidacy beforehand. And as a matter of proof, documenting conscription in the Confederate army is relatively simple. A criminal prosecution would not secure threshold injunctive relief — that is, an order halting Trump from pursuing higher office and enabling a competing Republican to win support of the party early on in the process. Moreover, given the DOJ’s massive docket of existing cases against insurrectionists, not to mention the prospect of pursuing conspiracy or obstruction of an official proceeding charges against people inside government on Jan. 6, it’s unlikely that dusting off an arcane post-Civil War criminal remedy would be a priority for federal prosecutors.

University of Chicago Law School Professor Daniel Hemel has argued that Congress’s enactment of an alternative civil remedy to the criminal one that already exists under the Civil Rights Act for purposes of implementing Section 3 could fall flat, as “this process would take time to play out — possibly years,” while courts address the legality of the law.

Hemel correctly points out that any new law would likely be challenged as an unconstitutional “bill of attainder.” Article I, Section 9 of the Constitution bars Congress from effectively convicting a person of a crime and imposing a sentence through legislation — that’s the role of prosecutors and judges in the executive and judicial branches, respectively. The same constitutional provision bans so-called “ex post facto” laws that criminalize conduct retroactively. Trump could argue that any legislation that comes out of the Jan. 6 Committee affecting his candidacy for office is a retroactive penalty for bad conduct that singles him out unfairly — and thus unconstitutionally.

But the success of such an argument is hardly guaranteed. As Hemel notes, passage of the 14th Amendment “came eight decades after the original Constitution,” and thus arguably should be construed as operating in concert with Article I’s ban on bills of attainder and ex post facto laws, rather than in violation of it. It can’t be that any legislation passed to keep Confederates out of office for past conduct is unconstitutional — that would render Section 3 automatically inoperative, which would fly in the face of the framers’ intent when the amendment was ratified.

The question, once again, is what could Congress do that satisfies bill-of-attainder and ex-post-facto concerns but also operates to achieve what Cheney is apparently envisioning: a Donald Trump who remains a free citizen, without the stain of criminality that would sully the office of the presidency itself, but safely segregated from the White House?

Another obstacle to legislation implementing Section 3 of the 14th Amendment is the Senate filibuster which, as a matter of parliamentary procedure (not the Constitution or another actual law, mind you), continues to require a supermajority 60-member vote to pass routine legislation — with the exception of budget reconciliation bills, trade agreements and other discrete matters like military base closures or arms sales. Senate Majority Leader Chuck Schumer has recently suggested carving out another exception to the filibuster for legislation shoring up voting rights, such as the John Lewis Voting Rights Advancement Act of 2021 — an attempt to repair the Voting Rights Act of 1965 after the Supreme Court’s dismantling of a key provision in 2013 — and the Freedom to Vote Act.

To be sure, the legal nuances and hurdles of potential legislation are impossible to probe in the abstract, and court challenges to any legislation would assuredly follow. Moreover, Congress must be exquisitely careful not to craft legislation that can be used as political ammunition to keep legitimate candidates off the presidential ballot.

But as we mark the one-year “anniversary” of Jan. 6, it seems that Cheney has hit on a possible sweet spot for accountability and national healing: Congress (in theory the most representative body of the federal government) enacts rules to keep serious constitutional offenders like Donald Trump from populating and exercising the privileges of the highest office of the land. After all, it’s not anyone’s birthright to be president. It’s something to be earned — or lost.