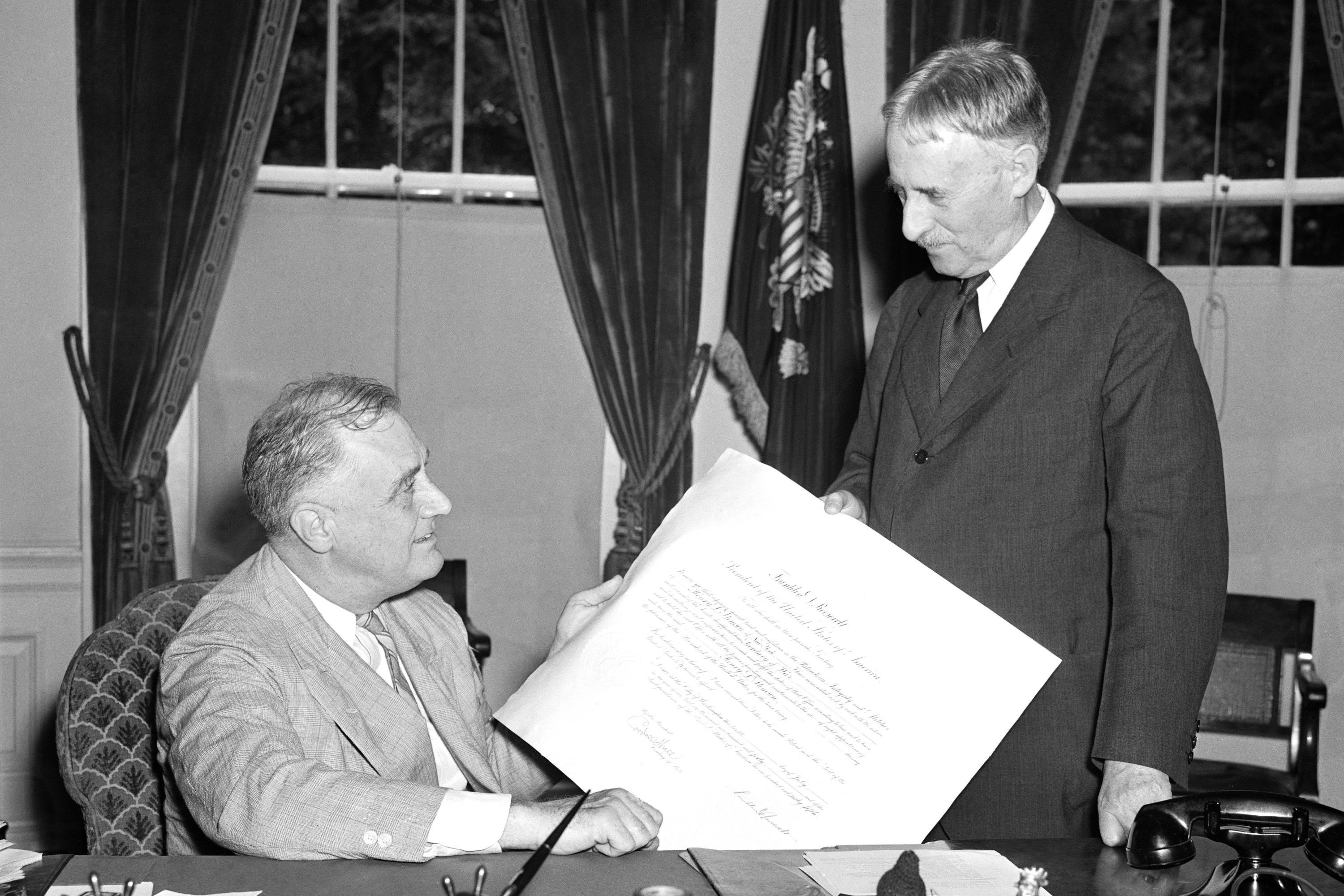 No, Liz Cheney won’t be President Joe Biden’s running mate. No, Mitt Romney won’t be running with Vice President Kamala Harris. No, Hillary Clinton won’t be heading the Democratic ticket in 2024. All of these suggestions have been floated in the last few days to widespread scoffing.

But if you really want a completely ludicrous scenario, how about Biden inviting former State Secretary Mike Pompeo and former Vice President Mike Pence into his Cabinet while enlisting Romney as his earnest advocate for some of his key policies.

Totally off-the-wall, right? Except … that’s exactly what former President Franklin Roosevelt did at the most crucial juncture of his presidency.

In the summer of 1940, Hitler’s forces were rampaging through Europe. Paris had fallen; so had Norway and Denmark. The British military had barely escaped destruction with a mass evacuation of Dunkirk, and Britain itself was all but doomed to collapse without significant U.S. aid — aid that was opposed by a powerful isolationist movement in the United States.

In an effort to build bipartisan support to rescue an embattled democracy abroad, Roosevelt took the extraordinary step on July 19 of naming two key Republicans to significant posts in his Cabinet. For secretary of War, he chose Henry Stimson, who had served as secretary of State under his predecessor Herbert Hoover. For secretary of the Navy, Roosevelt named Frank Knox, who had run for vice president with Alf Landon on the 1936 GOP ticket, and who’d assailed FDR’s “crackpot ideas.”

None of that mattered. For Roosevelt, the need to keep Britain out of Hitler’s hands, and to begin mobilizing America for the war he knew would come, made past partisan battles irrelevant. And he got crucial help on that front from the man who ran against him in 1940. Wendell Willkie, the dark-horse nominee of the Republican Party, was an avowed internationalist who — even during the campaign, and despite occasional isolationist rhetoric — provided critical support for an extension of the peacetime draft and for sending destroyers to Britain in return for military bases. After the election, Willkie supported another vital piece of aid for Britain — the Lend-Lease program providing military hardware — and became the president’s envoy to London.

It was likely the most serious effort at bipartisanship by any president, with the possible exception of Abraham Lincoln choosing Democrat Andrew Johnson as his 1864 running mate (a choice that proved disastrous). It also represented a far more significant outreach than the commonplace practice of putting a few members of the opposition party in government, as former President John F. Kennedy did when he named C. Douglas Dillon and Robert McNamara to key Cabinet posts, or when former President Richard Nixon named John Connally as his Treasury secretary and Pat Moynihan as his domestic policy adviser. It reflected the idea that, next to repelling Hitler, every other policy consideration paled in comparison. (That idea was encapsulated by FDR in 1943 when he explained that “Dr. New Deal” had been effectively replaced by “Dr. Win the War.”)

What’s the relevance for today? Ever since the last election, and especially since the determined effort by Republicans to reshape the electoral terrain for the next ones, we have been told that the free exercise of the ballot is at risk — that unless attempts at the state level to restrict the franchise and seize control of the vote-counting are stopped, we may literally not have that “republican form of government” guaranteed by the Constitution.

If this is true — and there is ample evidence that it is — then the varied “bipartisan ticket” scenarios can be seen as a cry for help, a call for some kind of bold “national unity” from the president, summoning adversaries to his side to protect our endangered political process.

If we put aside the more fevered speculation (Is anybody seriously suggesting the president could remove the first Black woman vice president without catastrophic results within his own party?), then what should the response of the president and his party have been over the past year, and what should it be going forward?

The combination of Trumpist efforts to take control of vote-counting and the all but non-existent Democratic margins in both houses of Congress would have suggested two key efforts. First, outreach to the “reality-based” faction of the Republican Party: Whatever our divisions over policies and programs, we will work together to protect the political process from efforts to undermine it. And, second, to Biden’s fellow Democrats: Our economic and social agenda is critical, but first we must shore up American democracy.

These efforts would have been fascinating to witness — on Earth Two. Look a bit harder, and you can see why this attempt would have been doomed to failure. The polarization that has captured our politics is far too great. And the Republican Party is the principal (though not the sole) case study.

Even in the first hours after the Jan. 6 riot, while the broken glass and desecrated halls were being swept clean, a significant majority of the House Republican caucus was voting to block certification of Biden’s Electoral College victory. The revulsion over former President Donald Trump’s conduct, expressed even by the invertebrate Minority Leader Kevin McCarthy, had a half-life of several days. Barely 5 percent of House Republicans voted to impeach Trump, and a big majority of the party leapt to and still cling to the belief that Biden stole the presidency. Trump and his allies are systematically purging the few Republicans who have stood up to him.

When Wendell Willkie signed on to help Roosevelt, he was shunned by the isolationist wing of his party and was not even allowed to speak at the 1944 GOP convention. If any Republican sought to join a national unity government led by Biden, the retaliation would have been significantly greater. (Remember what happened when Obama wanted Republican Sen. Judd Gregg to serve as his Commerce secretary; even that assignment proved too far a bridge for Gregg to cross.) Not a single Republican senator has endorsed Democrats’ broad election reform proposal.

For all but a handful of Republicans, any political alliance with Biden would have been suicidal, no matter how much they agreed that Trump and his cohorts were actively seeking to undermine the democratic experiment. Even The View can’t find a Republican who has rejected Trump’s Big Lie while maintaining credibility with the GOP. (Would any of the seven Republican senators who voted to convict Trump last year enter some kind of unity effort? Don’t bet on it.)

Now look across the aisle. While Biden himself triumphed in the 2020 primaries with a message of bipartisanship and unity, how willing would his party have been to embrace a national unity administration? Suppose Biden had said at the outset that combating the threat to free and fair elections had to be the dominant focus of his administration, that “Dr. Build Back Better” had to take a back seat to “Dr. Save the Republic”?

The cries of outrage would have been overpowering: We have total control of the Congress; we will likely lose at least one house in 2022; it’s now or never for these programs — all of them.

And what’s true of domestic policy matters would have been doubly so of contentious social issues. Before indulging in the notion of a bipartisan ticket, ask yourself how many Democrats you know who would support a ticket where the vice president was against abortion rights, supported open-carry gun laws or voted for the confirmations of Justices Neil Gorsuch, Brett Kavanaugh and Amy Coney Barrett.

There are even bigger barriers to some kind of “national unity” effort. Right now, Republicans in states across the country are enthusiastically making it harder to vote, and ensuring that their partisans will be in charge of the machinery to count those votes, while their GOP allies in the Senate unanimously oppose efforts to put federal laws in place to safeguard that vote.

In response, Biden gave a speech this week comparing those Republicans to Bull Connor and George Wallace, of segregationist infamy, which suggests something other than an effort to stake out common ground. At the same time, the Jan. 6 committee may be issuing subpoenas and criminal contempt citations against their fellow House members as they investigate efforts to block Biden from the White House and possible links between some of those members and the Capitol riot.

And even among those Republicans who reject Trump as their future, there is a clear division between what political path they should take: backing “un-Trumpy” Republicans or helping Democrats retain political power.

Yes, as Tom Friedman noted in his recent “Biden-Cheney” column, widely disparate groups in Israel have managed to form a coalition government, united by their common determination to keep Benjamin Netanyahu out of power. In that political system, defined by constantly shifting alliances, where no faction is close to forming a majority on their own, that kind of coalition is possible. Here, with only two parties to choose from, it’s more in the realm of fantasy.

I enjoy speculative political scenarios as much as the next person; in fact, I’ve even written a few of them. But when it comes to looking for a real-life answer to what threatens our electoral system, the idea of a bipartisan political coalition in today’s political environment just doesn’t pass the plausibility test. Although come to think of it, a Lieberman-Murkowski ticket…