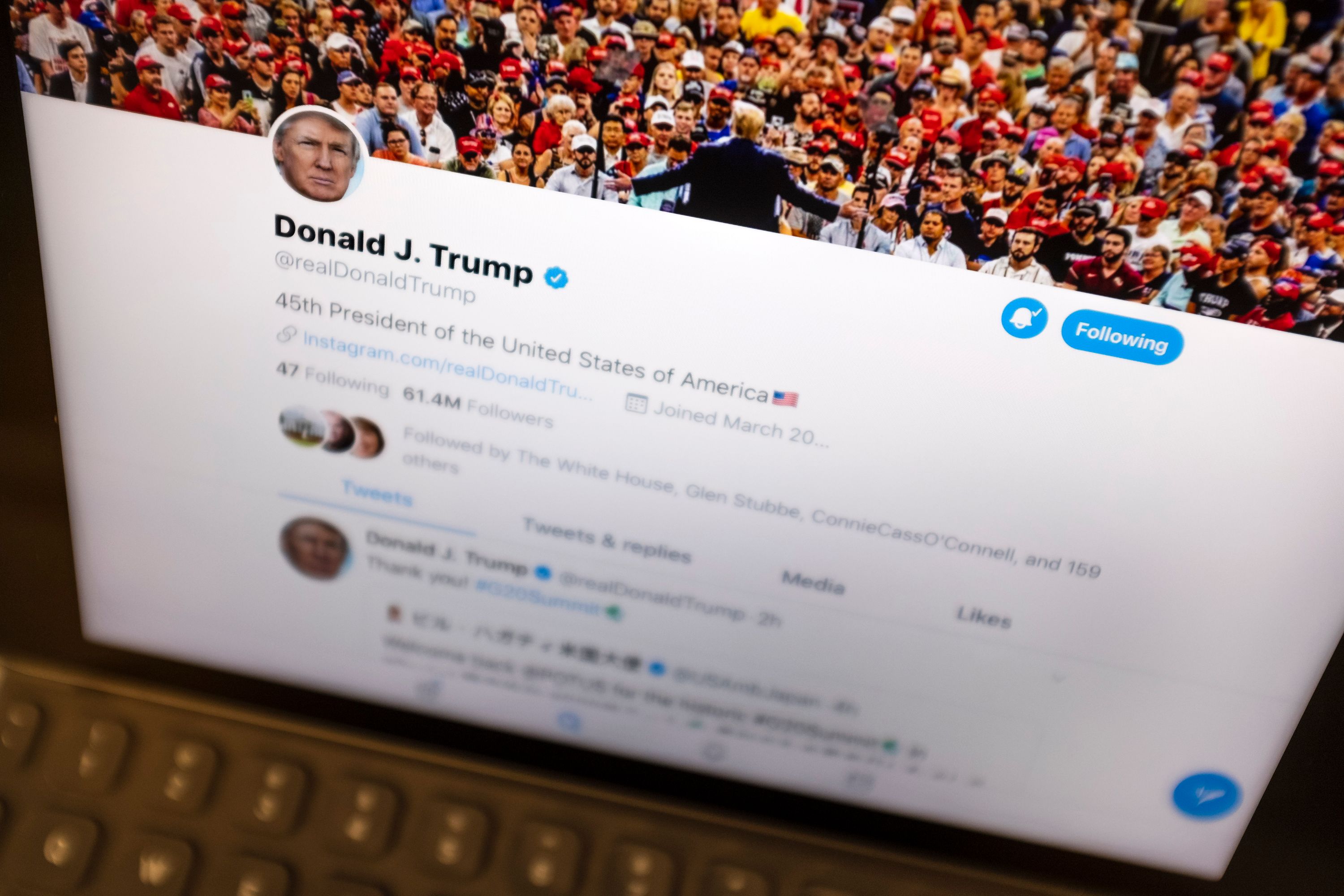 The usual round of year-end media reflection is enjoying a generous extension in 2022: This January marked the first anniversary of both the Jan. 6 Capitol riot and President Joe Biden’s subsequent inauguration, inspiring a slew of retrospectives about year one in a post-Trump America. We laughed, we cried, we debated the extent to which the republic is or isn’t doomed — all par for the course after a year during which the rolling waves of the pandemic, grocery inventories and NBA lineups were equally, wildly unpredictable.

As memorable as those twin January anniversaries are, they’ve largely obscured one that felt just as seismic at the time: Jan. 8, 2021, when Twitter decided to permanently ban former President Donald Trump from the platform, silencing the voice that permanently fused it with national politics. It’s hard to overstate how shocking the decision was in the moment. Appropriately enough, it might have been summed up best by one of Trump’s fellow reality television stars: “Getting kicked off Twitter is about as hard to do as getting booted from the housewives,” tweeted Bethenny Frankel of “The Real Housewives of New York City.” “It’s literally designed for provocative social interaction.”

Twitter’s stated rationale for the ban was that in the wake of the Jan. 6 insurrection, Trump’s continued use of the platform to cast doubt on the results of the 2020 presidential election amounted to a credible incitement of violence. That judgment call was greeted with both glee and relief from liberals who long blamed Trump’s use of the platform for the spread of misinformation, hate speech and general political chaos. Conservatives in turn were largely outraged, adding yet another grievance to a long-brewing grudge against the private moderators who police the public sphere of discourse. Many on the right quickly predicted the platform’s downfall, envisioning a world where it would be supplanted by a balkanized archipelago of ideological alternatives like Rumble, Parler and former Trump aide Jason Miller’s unfortunately-named Gettr.

Disappointment soon reigned on both sides of the aisle. False information about Covid-19 and elections still abounds on Twitter, despite the company’s newly-aggressive stance toward it — including a ban of Georgia Rep. Marjorie Taylor Greene, who surely took it as a high honor to suffer the same social-media fate as her liege. The platform also remains as central to the mainstream political discourse as it ever has, driving ever-higher levels of revenue even absent the man who glided into the Oval Office on its pixelated blue wings. And even in exile, Trump still maintains something like a Twitter presence with his periodically-transmitted statements from Mar-a-Lago, if they admittedly lack the earth-shaking force his morning tweets once carried.

(His Twitter ban has largely bolstered his political fortunes, as well, a prediction long held by both wary liberals and moderate conservatives.)

As it turns out, the experience of being on Twitter without Trump is largely the same as it was with him — the informational fog of war no less foggy, the merchants of anger no less angry, the media junkies no less addicted to its endlessly-refreshing timeline and steady drip of notification-induced dopamine. The simplest conclusion based on that evidence is unlikely to offer much solace to liberals on a purifying crusade, conservatives who chafe against Big Tech moderation or social media users simply hoping for a break from political angst and extremism: Trump’s disruptive, fallacious, unpredictable and, yes, occasionally hilarious Twitter presence was more a symptom of our hazardous digital landscape than its cause.

Next to the immediate, still-fresh threat of political violence that inspired Trump’s ban, the most common complaint about his use of it was the role his account played as a gushing font of misinformation — especially about the 2020 presidential election, or any other election a Republican might happen to lose. And as liberal critics predicted, about a week and a half after the ban was in place a headline in the Washington Post trumpeted: “Misinformation dropped dramatically the week after Twitter banned Trump and some allies.”

The report was based on an analysis from Zignal Labs, a Bay Area-based research firm that found a steep decline in mentions of election fraud and the use of hashtags meant to organize Trump supporters for Jan. 6. (Twitter also took sweeping action after Jan. 6 to ban the most extreme right-wing accounts, including more than 70,000 associated with the QAnon conspiracy theory.) Twitter’s rival platforms Facebook and Instagram took similar action, amounting to a too-little-too-late purge of the voices behind some of the Trump era’s most radical far-right chatter.

And yet: despite the social media giants’ best efforts to clean up their own streets, it’s difficult to credibly say the country’s overall epistemological health has improved. An overwhelming percentage of Republican respondents to a UMass Amherst poll conducted in mid-December 2021 said Biden’s election win was either “probably” or “definitely” illegitimate, in keeping with many others conducted over the past year. The claim that the election was stolen remains at the center of Trump’s ongoing political project, an effective litmus test for any Republican pol hoping to score the former president’s endorsement. The other major vector for false information, the Covid-19 pandemic, hasn’t fared much better despite Twitter’s newly-aggressive stance; globally, only Russia is more vaccine-skeptical than the United States.

Tougher enforcement from Big Tech companies might earn them goodwill from media critics, a leg up in the fierce Silicon Valley competition for young, liberal talent, or credibility in the burgeoning and lucrative “disinformation” industry. But the overall informational landscape remains just as gnarled and difficult to navigate, even on a Twitter that censors the most overt fallacies. Furthermore, Trump’s continued domination of the GOP puts the lie to the idea that Twitter was somehow a political Excalibur that uniquely empowered him to convert a nation of otherwise-innocent rubes into die-hard fanatics. Trump innovated in his use of social media, to say the least. But to credit social media and cable news coverage for his power conveniently elides the weakness and torpor of the political order that preceded him, which required nothing more than a rhetorical push from a boorish reality television star to topple.

There is one area in which Trump’s removal has led to the expected sea change for the platform: His ability to micromanage the news cycle has diminished considerably. But even that takeaway isn’t clear cut. During the Trump administration, reporters and editors spent the wee hours of the morning experiencing some combination of dread, anxiety and sheer wonder at the unpredictability with which the then-president would set the day’s agenda with his tweets. Whether he would still wield that power from outside the White House had he remained on Twitter is impossible to know.

But a large part of the novelty, fear and unpredictability of the Trump presidency came from the impact his personal recklessness had on the slow-moving machinery of government. Viral as they might still have been, it’s hard to imagine his ex-presidential tweets having that kind of existential and news-driving charge. The most immediately obvious result of the ban on Trump’s account had, ironically, very little to do with its impact on life outside the Beltway.

The most significant way in which Twitter remains largely unchanged without Trump is perhaps the saddest for his most dedicated followers. Despite their predictions of irrelevancy, the platform remains at the dead center of the political media and its attendant discourse, unquestionably the public square for both news scribes and news junkies. That’s inspired a heated intra-right debate over whether the appropriate response to Twitter’s increasingly aggressive moderation would be to abandon it for more Trump-friendly climes or to stay and defend their place in the metaphorical arena.

The “remain” contingent has by far the most persuasive argument. There’s a vast body of research showing the powerful link between moral outrage and the virality demanded by digital advertising revenue models. People get angry and they’re more likely to engage with a post, which benefits Twitter, as well as media companies who can use those engagement numbers to sell advertising. The obviously toxic incentive this creates has led some news organizations to experiment with alternative revenue models, like donations or an old-school focus on subscriptions. But unlike the pre-internet and social media era, there’s an infinite amount of space to be filled and infinite configurations of consumer choice. That makes Twitter, with its relatively small but highly energized and influential user base, the natural platform of choice for merchants of outrage, agitprop and propaganda of all ideological flavors.

Which is what turned Trump’s lack of filter into his social-media superpower. By virtue of his status as a political outsider, he could say the outrageous things he did without fear of shame or meaningful censure. He inflamed his enemies to the point of madness, a powerful source of virality even without the force multiplier of his allies’ subsequent schadenfreude. Which would all be a humorous footnote, if he’d continued to focus on Robert Pattinson’s love life and the weight-loss efficacy of Diet Coke. But by entering politics, he made his uniquely explosive and irascible use of the platform a permanent feature of the nation’s public affairs.

It’s inevitable, then, that in some ways Twitter is undeniably different without Trump. Extremists are denied his massive megaphone, bemused observers are denied his strange musings about wind turbines and television ratings, reporters sleep a little easier through the early morning. But in every meaningful way, the incentives still remain that made the septuagenarian former president Twitter’s most undeniable power user through a combination of aggrieved instinct and poor taste. If those qualities — and their political consequences — are what the platform hopes to erase, it’ll have to break far more of a sweat than a single mighty swing of the banhammer could ever provide.