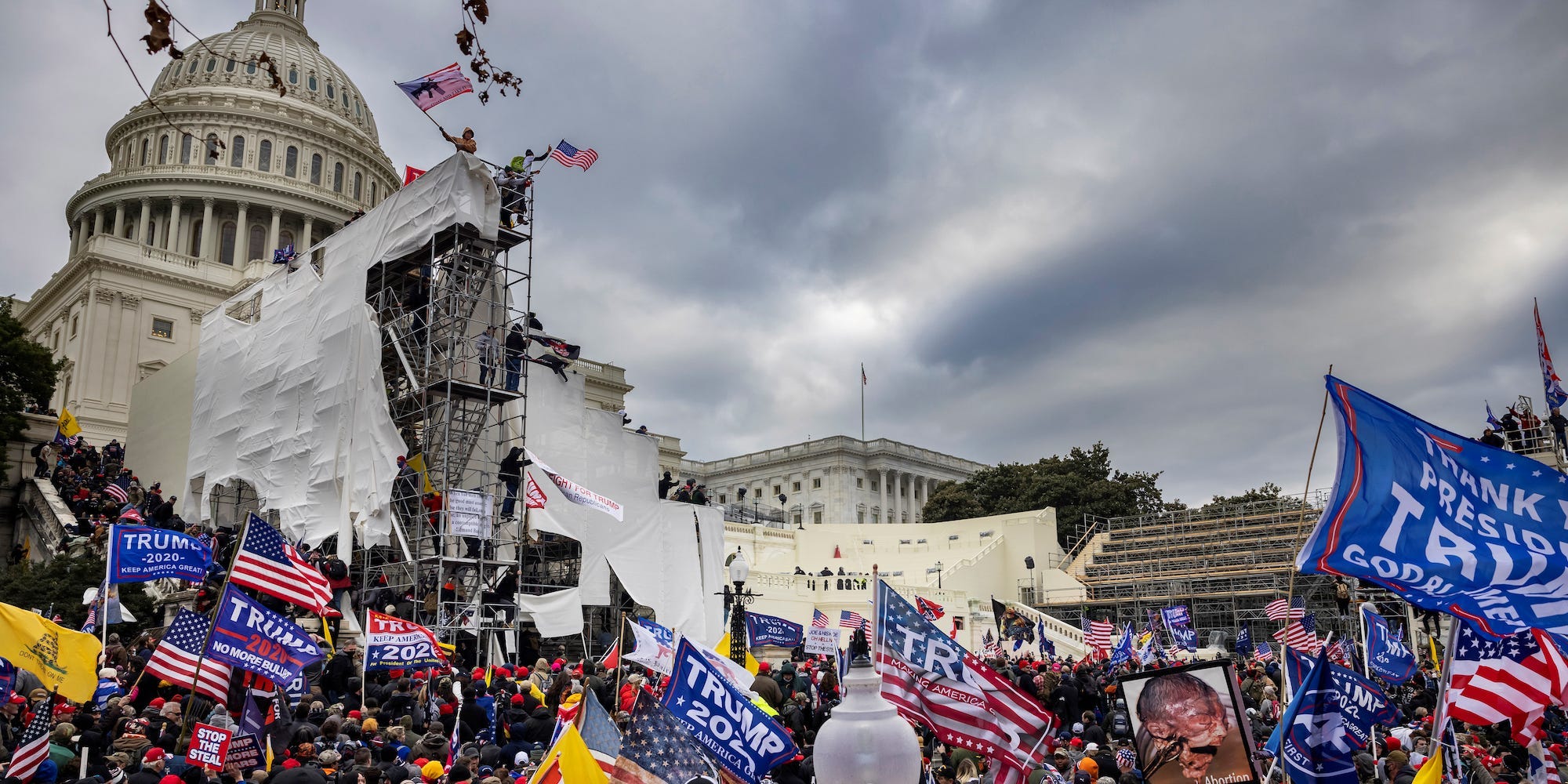 Trump supporters clash with police and security forces as people try to storm the Capitol on January 6, 2021 in Washington.

As the first anniversary of the deadly January 6 Capitol attack arrived earlier this month, the country reflected on the landmark event and its rippling repercussions in the year since.

One expert on extremism told Insider that historians will likely look back on the siege — which saw a mob of thousands of Trump supporters storm the Capitol in an attempt to stop the certification of the 2020 election results — as the beginning of an American insurrectionist period, marked by civil unrest and a continuing rise in right-wing extremism.

Another suggested January 6 will be remembered as a crossroads for the future of American democracy.

But one thing has become clear to both experts in the last year — the political unrest is ongoing.

“I think what historians will understand most is that the insurrection on January 6 did not end on January 6,” Eric Ward, executive director of Western States Center and a senior fellow at the Southern Poverty Law Center, told Insider.

And experts’ outlook on the ongoing fallout of the siege is not necessarily a positive one.

“I want to be real with people — we have hard days to go,” Ward said.

Since January 6, 2021, authorities have been working to apprehend and punish perpetrators involved in the domestic terrorism incident. The federal government has arrested more than 730 people in connection with the attack that left five people dead and more than 100 law enforcement officers injured.

But a dangerous trend of conspiracy theories and lies surrounding the event have allowed a revisionist history of the attack to take shape — promoted by one powerful political entity in particular, according to Heidi Beirich, co-founder of the Global Project Against Hate and Extremism.

“The rise of extremist groups like the Proud Boys and Oath Keepers are undeniably concerning and very serious,” Beirich told Insider. “But even more worrying is the radicalization of the Republican party in the last 12 months since the attack.”

A December survey from the University of Massachusetts at Amherst found that nearly three-quarters of Republicans believe that President Joe Biden was not legitimately elected to the White House — a staggering statistic considering the number of election experts, government agencies, and Trump allies who have disputed the pervasive claim time and time again.

A recent survey from The Washington Post and the University of Maryland provides even more cause for concern — forty percent of Republicans think violent actions against the government could be justified in certain instances.

Over the last year, high-profile Republican lawmakers have engaged in ongoing January 6 denialism, purported debunked conspiracy theories, and, for the most part, refused to participate in a bipartisan Congressional committee on the attack.

“The partisanship is making a full-throttled condemnation of extremism difficult,” Beirich said. “You have one party saying this is a threat and we need to do something about it, while the other party is saying those were just tourists on January 6.”

The lasting effects of Republicans’ attitude post-Capitol siege extend beyond downplaying the riot. According to Beirich, the party now seems to be trending toward a disturbing new mission: undermining the US election structure.

That progression tracks, according to Ward, who noted that the physical violence witnessed on January 6 was an attempt to subvert the American vote.

“A few thousand people were close to overthrowing a critical part of American democracy, and that has galvanized that base,” he said. “Republican politicians are taking note.”

Jessica Huseman, editorial director of Votebeat, said the Republican party swiftly made election security a “life or death issue” in the aftermath of January 6. Democrats, however, have not risen to meet them in exuding the same urgency around the topic, she said.

“I have very little patience for the lack of progress that has been made even though Democrats control… the government,” Huseman told Insider.

Much of the voting legislation proposed and passed by Democrats at both the state and federal level since last year’s attack has focused on targeted issues like gerrymandering, or election technology, Huseman said.

“Those things are important, but at the end of the day, if we have allowed January 6 to pass us by for a whole year without dealing with the root causes of the crisis, I think we’ve failed,” she said. A person is seen hanging from the Capitol facade.

The idea of voter fraud within American elections has been a persistent talking point in the Republican party for years, according to Huseman, but Trump was the first to make it an ongoing advocacy issue.

Even before the 2020 election, Trump spent much of his presidency spreading the idea that US elections are neither free nor fair. His insistence only intensified as it became increasingly clear that Biden was likely to beat him in the November election, and Trump’s fixation with the “Big Lie” that he won the election ballooned into obsession following Biden’s victory.

The ex-president reiterated the claim during a speech he gave at the “Stop the Steal” rally that preceded the January 6 attack, and he has continued to push the idea in the year since.

“For democracy to function, the broad groupings of people have to agree you can lose and fight and win another day,” Beirich said, “and now Trump has eroded that belief.”

Trump’s lie has undoubtedly had long-lasting effects on members of the Republican party — millions of whom believe Biden should not be president — a reality for which Ward laments, there is little to be done.

“It is a lie that has led to physical violence and an existential attack on the US,” Ward said.

“But it’s not about redeeming those Republicans who have, many through no fault of their own, been deceived,” he added. “This is about inoculating the rest of Americans from that lie.”

Americans worry more violence could be coming, and experts agree

More than half of Americans believe an attack similar to the Capitol riot will happen again, according to a recent Axios poll. Ward and Beirich said it’s possible.

“I don’t know what form something like this would take, but I think unrest will be coming,” Beirich said.

Ward predicted 2022 will bring more hate crimes, attacks on elected officials and government employees, and the continued intimidation of educators and healthcare workers.

But the “real fight” in the coming year, he said, will revolve around elections. With 2022 midterm elections on the horizon and Trump teasing a possible 2024 campaign, a repeat of January 6 could come sooner than later.

“It’s possible we could find ourselves right back to this moment within the next year or two,” Ward said.

Beirich pointed to a slate of domestic terrorism events committed around the 2018 midterms, including the Pittsburgh Tree of Life attack and a shooting at a Tallahassee yoga studio, as harbingers of what impending elections could potentially spark later this year.

“Americans don’t understand how fragile our democracy is at this point,” Beirich said. Trump supporters clash with police and security forces as the violent mob breached the Capitol on January 6, 2021.

Despite the dread spawned by January 6, Ward said the date also signals hope

“January 6 also represents the day that Americans began to defend their democracy,” he said, adding that more work is needed to do so.

Strong sentiments from civic and religious leaders, as well as politicians speaking out against increasing violence is a necessary stopgap against rising extremism, both experts said.

Movement from Democrats on impactful voting legislation, as well as federal resources targeted toward local governments dealing with community insurgence, could also help.

“We need a norms-resetting,” Beirich said. “We need to try and roll back all the terrible things Trump rolled into our system.”

But the most important defense against rising extremism in the US, according to Ward and Beirich, lies with everyday Americans.

“Vote for people not undermining our system,” Beirich said.

People need to show that extremism is being contested; that people are fighting on behalf of democracy, Ward added.

“What has to happen is we have to break this illusion that we’re losing,” he said. “The idea that democracy has lost is to buy into the narrative of the insurrectionists. Democracy is not lost.”