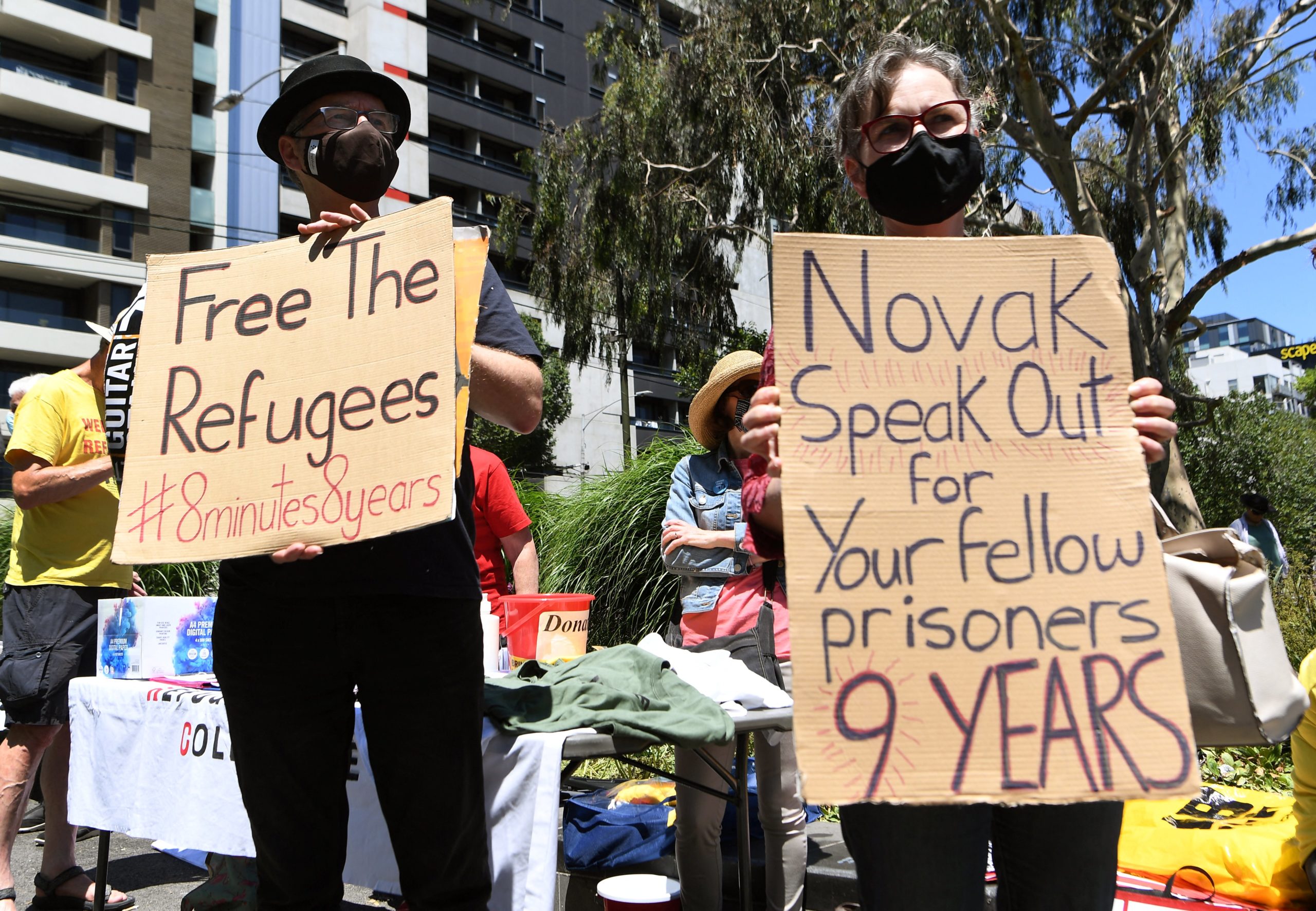 At least Novak Djokovic was able to go home.

During his short, sensational captivity in the Park Hotel, Melbourne, the world’s best tennis player was as close as any member of the public can get to a group of the most wretched people in Australia.

“He experienced what we are experiencing for nine years and he felt how cruel it is to keep human beings in detention,” said Mehdi, a 24-year-old refugee who has been trapped in Australia’s brutal immigration system since seeking sanctuary there as a 15-year-old.

Australia’s bungled deportation of Djokovic, which ended his bid to compete in the Australian Open this week, exposed the hardline border politics of Fortress Australia. The unvaccinated player’s appeals were swept aside by what legal experts called the “God-like” powers wielded by Immigration Minister Alex Hawke.

Those are the same powers the government has used to keep Mehdi and 32 others — the number is an estimate from refugee advocates — locked inside the Park Hotel for up to two years, plus around 1,400 others in different forms of indefinite detention or visa limbo in Australia or on Pacific islands.

Now the Serb is back on home soil, those he left behind hope he’ll tell the world about treatment they say amounts to torture.

Djokovic’s room was one floor below the detainees, separated by guards on the stairs. It’s not clear whether he knew they were there.

Superficially, their views of the Australian government are similar. Djokovic’s dad Srđan called his son’s treatment “political persecution and torture.”

Australia’s iron will to stand by its borders was familiar to the refugees. But the differing outcome for the rich, white tennis champion was not lost on them either. After just a few days in the hotel, Djokovic arrived back in Serbia to a hero’s welcome.

“Lucky for him, he has a place to go back,” said Ismael, a Somalian refugee who, like Mehdi, has been in the detention system for nine years. “But for us we have no place to go back because we fled from persecution and murder.”

“We came for safety, not to play tennis,” said Joy, another of the men in the hotel.

In his room, one floor above the room where the gaze of the world’s media landed for a few intense moments, Mehdi is barely surviving.

He and the other refugees spend their days sitting in windowless time, or smoking cigarettes on the hotel roof. Mehdi said he mostly just stays alone with his guitar and books. He has suicidal thoughts. The most disturbing thing, he said, is when he stops feeling anything at all.

“It’s not normal to be normal in such a cruel situation,” he said. “If nothing’s happening to me, then something’s going on, like, it’s dangerous. Because my body is not reacting. My mind is not reacting to the torture and that’s a bad thing.”

Despite spending a third of his life in detention, he has never been charged with a crime. Mehdi — who doesn’t use his surname publicly for fear of reprisals against his Arab-minority family in southern Iran — is one of hundreds who tried to cross the Pacific Ocean to Australia in 2013, just as the government brought in a new policy that no one who arrived by boat seeking asylum would ever be given a home in Australia.

The refusal to provide sanctuary, even after refugee claims have been processed, is a clear breach of international law, according to legal experts. Last year the U.N. said Australia had “undermined” their rights.

“Australia takes its international obligations seriously, and is committed to acting consistently with those obligations” by providing options for refugees to be resettled in other countries, a spokesperson for the Department of Home Affairs said. “While seeking asylum is not an offense under Australian law, illegal maritime arrivals have breached Australian border controls and domestic laws by entering without a visa.”

The department didn’t respond to a direct question about the refugees allegations that their treatment amounted to torture.

The Australian government justifies the measures on humanitarian grounds. They point to the collapse in boat arrivals as evidence they have broken the people-smuggling business that used Indonesia as a staging point for dangerous crossings into its waters. Boats occasionally still come, but they get turned back.

“We have been treated badly, even worse than criminals,” said Ismael, who sent a voice message that was shared with POLITICO by refugee advocates. “There’s no light in the tunnel … And that’s [the] worst torture that someone can get: uncertainty. Put him in a place and don’t tell him how long more it will take.”

Mehdi has a phrase for it: “White torture … designed by white men.”

In the Middle East, he said, “they want to torture someone, they take him somewhere and they torture him for three days. And that’s it.”

But in “classy countries, first world countries, that torture is different.” Australia, he said, has designed a system that retains a veneer of lawfulness, with the advertised purpose of “saving lives,” while actually “destroying” them.

In both Mehdi and Ismael’s view, the policy is rooted in racism and the government’s belief that it gains political advantage through the harsh treatment of refugees. The government spokesperson said it was “committed to the health and welfare of detainees.”

“The really difficult thing about these ministerial powers is that they are discretionary, they’re non-compellable and they also are designed to prevent judicial review of their exercise. So, if you’d like, they’re a little carve-out from ordinary rule of law,” said Carolyn Graydon, who leads the human rights law program at the Asylum Seeker Resource Centre (ASRC). Graydon said Djokovic had been on the receiving end of those powers — even with his wealth, status and legal team.

The U.N. has repeatedly condemned the Australian detention program for the impact on those caught in its net. In separate incidents five days apart in 2016, Omid Masoumali and Hodan Yasin set themselves on fire at Australia’s “offshore processing center” on the Pacific island of Nauru. Masoumali died.

For those that survive, there will be an indelible shadow. “When he’s seeing a man burning himself in front of him, who can remove that picture from the head of that child?” said Mehdi.

He is waiting. He has completed his application for a refugee exchange program agreed between Australia and the U.S. in the final days of the Obama administration. Two presidents later, it hasn’t happened. If he ever does get on the plane to the U.S., what does he dream about? “I stopped dreaming, it’s not healthy,”

Mehdi is hopeful that Djokovic will speak out on their behalf. Maybe he will act out of compassion, he said. “I don’t know him. I can’t judge him.”

The signs aren’t good. Djokovic’s family spent their ordeal being supported in Belgrade by Nigel Farage, the U.K. anti-immigration activist and politician who has previously championed Australia’s border regime as a model for Britain.

But even if Djokovic were not a true ally, speaking up for those he left behind might be a way for the serial champion to land a victory over the Australians.