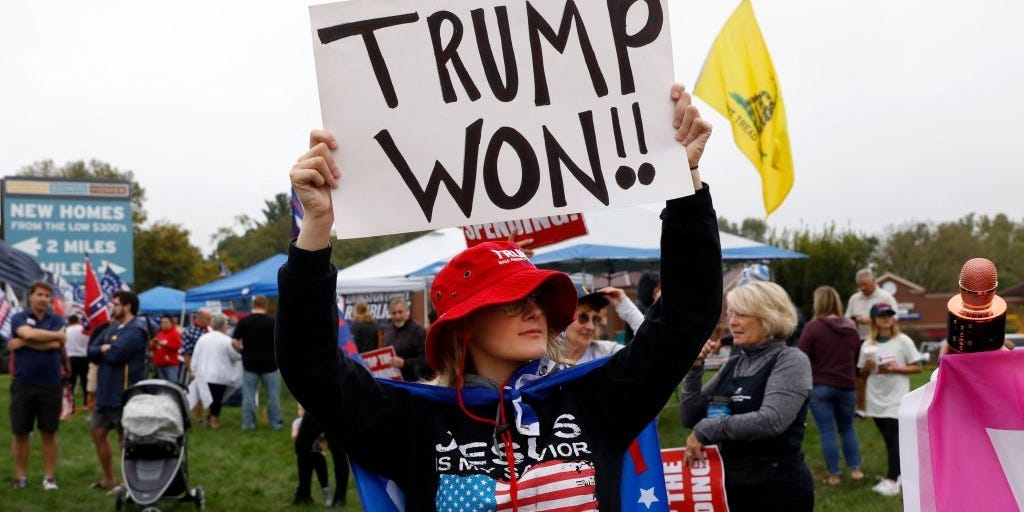 Nancy Galloway, a supporter of Donald Trump, protests the visit of President Joe Biden to Howell, Michigan, on October 5, 2021.

An audit of 2020 presidential election votes in Michigan’s Macomb County found no evidence that voting machines had been meddled with as part of a plot to subvert the election.

Macomb County Clerk Anthony Forlini, a Republican, commissioned the audit as conspiracy theories spread among supporters of Donald Trump that the machines had been hacked or tampered with.

Forlini commissioned Alabama-based Pro V&V, a company accredited by federal election authorities, to examine voting machines in the county for signs of interference, or other malpractice.

Joe Biden was the overall winner in Michigan with 51% of the vote to Trump’s 48%.

In a letter last week, Forlini said the inquiry found no evidence to substantiate the conspiracy theories.

“As a result of the audit dated January 5, 2022, we learned that there was no outside interference in our election server, our election software, as well as our modem communication systems,” Forlini wrote.

“This was just one step to restore confidence in the election process.”

Forlini told Michigan Live that on taking office as county clerk in January 2021 he faced questions about mass fraud. He said he commissioned the audit because he had not personally supervised the election the previous year.

No evidence has emerged to substantiate Trump’s claims of mass fraud in Michigan, or any other state, in last year’s election.

The claims have been rebutted or dismissed in a series of legal challenges, but supporters of the former president have continued to push for audits in battleground states.

Despite this, Trump has continued to claim that victory in last year’s election was stolen from him, and has made support for the claim a litmus test of loyalty, boosting candidates in the mid-terms who have backed it.

A Republican-commissioned audit of votes in Arizona’s Maricopa County last year also found no evidence that Biden’s win was the result of a miscount. Trump allies are seeking similar audits in states including Georgia and Pennsylvania.