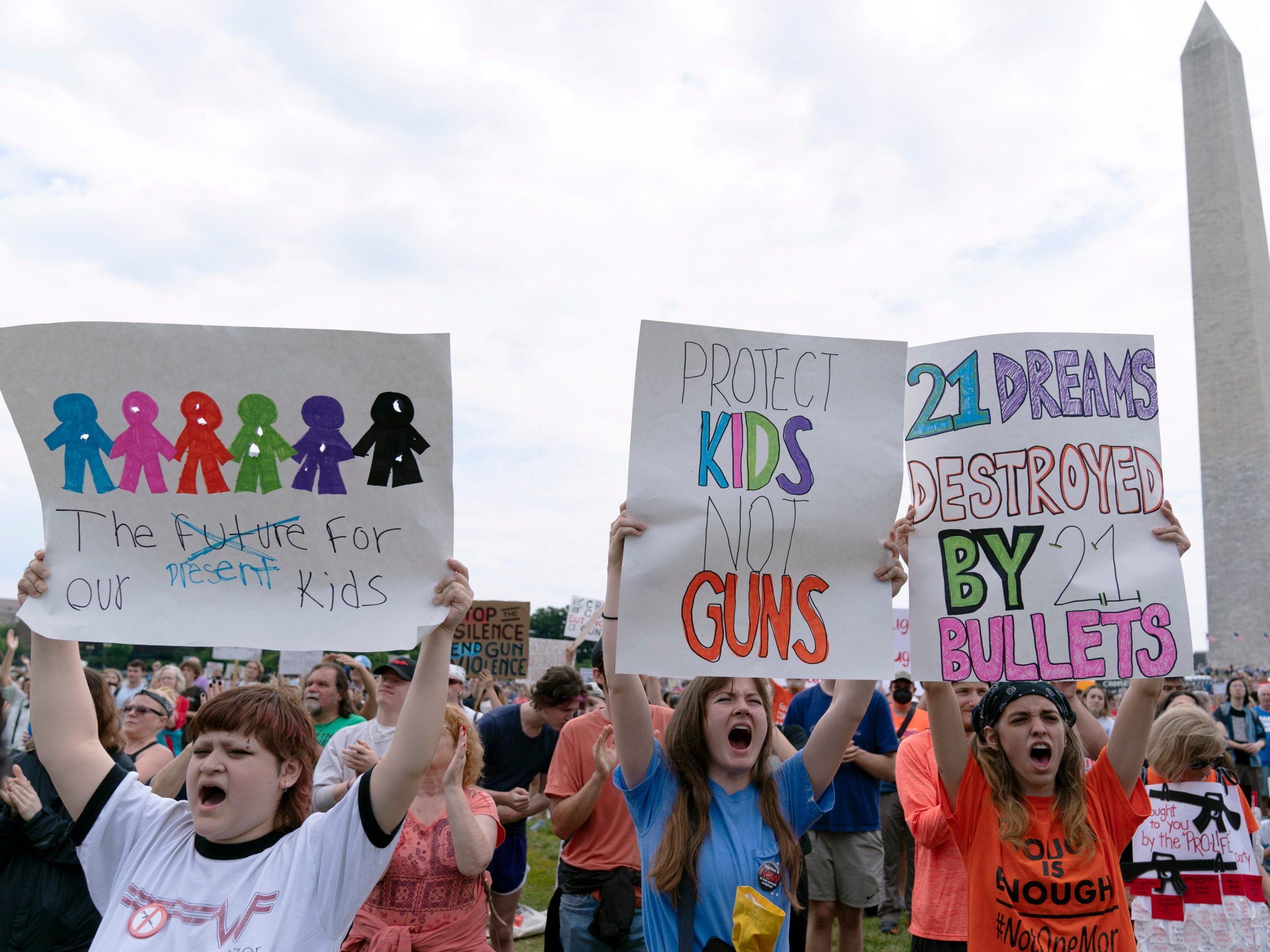 People hold signs in the second March for Our Lives rally in support of gun control in front of the Washington Monument, Saturday, June 11, 2022, in Washington. The rally is a successor to the 2018 march organized by student protestors after the mass shooting at a high school in Parkland, Fla.

Demonstrators at the March for Our Lives rally protesting in support of gun law reform were sent running by a shooting scare on Saturday.

The crowd surged into what one witness described as a “near-stampede” after a man was heard yelling by several witnesses that he had a gun, the Daily Beast reported.

“We heard a commotion and screaming and then all of a sudden, somebody yelled, ‘Everybody get down,’ and I’m unsure whether that came from security or another person in the crowd,” Brandon Farbstein, an activist who was present at the rally, told Insider. “But everybody, quite literally, in an instant dropped like flies. We were so utterly petrified of what was going on, while not having any indication of what was happening.”

US Park Police detained one person in connection with the incident and released a statement that said “no weapons were involved and there is no risk to the public.”

“A participant in the rally near the stage disrupted the moment of silence. There was no threat to the audience at any time,” a spokesperson for the March of Our Lives told Insider. “The individual was immediately removed, the organizers acknowledged the issue with the crowd, and the program continues as planned. “

The scare came as demonstrators were participating in the second March for Our Lives rally in support of gun control measures. The rally, with satellite protests nationwide, was organized in response to the Uvalde, Texas, elementary school shooting on May 24 in which a gunman killed 21 and wounded 17 others.

The first March for Our Lives rally was held after a mass shooting killed 17 and wounded 17 others at a high school in Parkland, Florida.

“Not sure what morally depraved human decided the moment of silence for school shooting victims was a suitable time to start a counter protest and scare everyone into a near-stampede,” one witness wrote on Twitter, “But kudos to the March for our Lives organizers on bouncing back.”

Farbstein told Insider the rally got back on track after the interruption, but there was a palpable sense of fear from participants after the crowd surge.

“It definitely brought a different level of energy throughout the entire crowd, especially backstage. There were a ton of the participants, whether it was families or students themselves who, just as you can imagine, were absolutely traumatized — not only from what they have experienced in their past, but to go through something like this at an event where they’re trying to literally prevent these types of situations from ever happening again,” Farbstein said.

“It’s pretty mind-boggling, and it’s just a really unfortunate example of why we need to continue doing this work.”