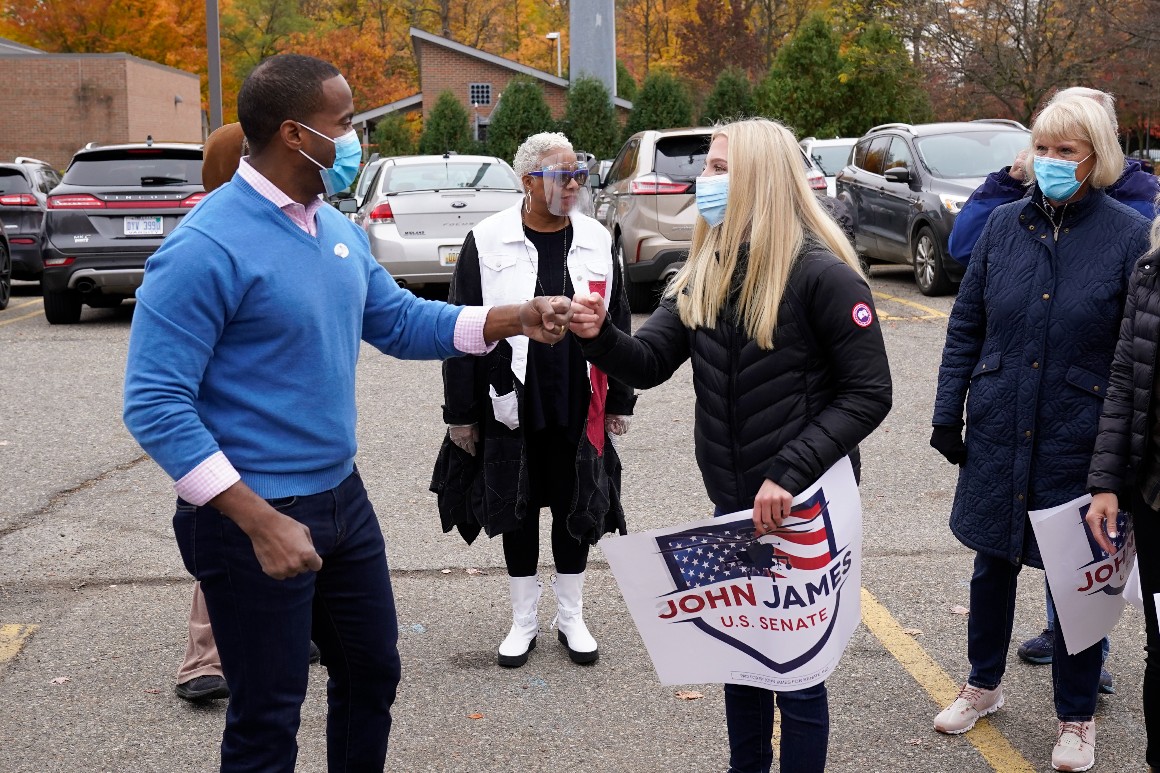 Recruiting James has been a top priority of House Minority Leader Kevin McCarthy, according to sources familiar with his thinking. And the Congressional Leadership Fund, a super PAC with close ties to GOP leadership, commissioned a poll, obtained by POLITICO, that shows James significantly ahead of two sitting Democratic representatives in potential matchups in the new district.

James, among the most prominent Black Republicans in the party, challenged Democratic Sens. Debbie Stabenow and Gary Peters in 2018 and 2020, respectively. He lost by 7 points in the 2018 midterms and by 2 points last year.

Despite the pair of statewide losses, Republicans in both Washington and Michigan consider James a strong candidate for office, with a sizable fundraising base and an already established profile in the state. James has been considering entering the crowded Republican primary to challenge Democratic Gov. Gretchen Whitmer next year — but Republicans familiar with the dynamics of both races say they now anticipate James will run for the House.

House Republicans were thrilled at a story from The Detroit News on Tuesday, when the paper reported that James was “strongly considering” a run in the newly created 10th District.

“He’s seriously considering running,” one Michigan Republican familiar with his thinking, who was granted anonymity to speak candidly, told POLITICO on Wednesday. “A lot of folks are encouraging him to do that both in the state and nationally.”

James has been a top potential recruit for Republicans at all levels of government since his first run for office in 2018. In 2020, House Republicans tried and failed to entice James to run for the lower chamber. He met with the Republican Governors Association several times about running next year against Whitmer, in which the RGA tried to sell James on being able to run as the top of the ticket for the first time, according to a source familiar with those discussions.

A campaign for governor would, however, bring significantly more political risk than a bid for a House seat that’s expected to lean Republican next year. At least some of the candidates already in the race against Whitmer — including former Detroit Police Chief James Craig, conservative commentator Tudor Dixon and businessperson Kevin Rinke — would likely have not stepped aside for James.

And while Republicans believe that Whitmer is vulnerable in 2022, they acknowledge that defeating her won’t be an easy task — and a third consecutive statewide loss, either in the primary or general election, could doom James’ political future.

As of Oct. 20, Whitmer had $12.7 million in cash on hand for her reelection bid, according to a filing with state campaign finance regulators this fall.

But a bid for the House is not a done deal. The Michigan Republican, who spoke to James recently, said a final decision could come in January — and that there’s still people pushing him to run for governor, adding that “he hasn’t ruled anything out.”

Top House Republicans were already gearing up to help James take on either Democratic Rep. Haley Stevens, who flipped a red seat in 2018, or Democratic Rep. Andy Levin, who replaced his father in Congress that same year.

The Congressional Leadership Fund polled the new district in mid-November, after the state’s independent redistricting commission released a series of proposed maps. James had a solid lead over both incumbents in the CLF poll, which was conducted by the Republican polling firm Cygnal. The commission chose that map on Tuesday afternoon. Tuesday brought even better news for those boosting James: Stevens and Levin chose to run against each other in a more favorable 11th district, leaving him in an open seat divide roughly evenly between the parties, should he run.

Among the other interesting toplines: A generic Republican led by 7 points, 49 percent to 42 percent. Biden’s job approval was underwater by 16 percentage points, and slightly more voters had an unfavorable opinion of Whitmer (49 percent) than viewed her favorably (46 percent).

If James does run for the battleground House seat, CLF won’t be the only group pushing him. FreedomWorks, a major conservative outside group, also said that it would support James should he decide to run for the House.

“If he decides to run, FreedomWorks for America aims to be a major player in getting him elected,” Peter Vicenzi, a spokesperson for the group, said in a statement. “James would be a key part of the next generation of House Republicans needed to retake the majority.”

James, who was endorsed by then-President Donald Trump for both of his Senate bids, conceded to Peters about three weeks after the election last year. That only came after a then-staffer for James declared him the victor and accused vote counters of “making up numbers” to cheat him out of a win. That staffer later told POLITICO they deleted and apologized for that tweet, but still believed there were widespread “irregularities” — and James asked a state board to hold off certifying the results to investigate “what I believe to be credible and concerning irregularities in the vote counting process,” an echo of Trump’s false claims about widespread voter fraud.

If James does run for the House seat, he won’t enter the race with much of a significant cash advantage that former statewide candidates sometimes enjoy.

James’ former Senate campaign account only had $154,000 in the bank as of the end of September, the most recent publicly available campaign finance information. Since his 2020 loss, his campaign has been spending down its cash balances with charitable donations, giving nearly $1.4 million to charities ranging from dog rescues and food banks to churches and a charity focused on helping interpreters that worked with the U.S. military abroad.

The giving was part of James’ “nickel promise,” which he touted during his Senate bid, that he would donate 5 percent of all of his campaign contributions to charity.