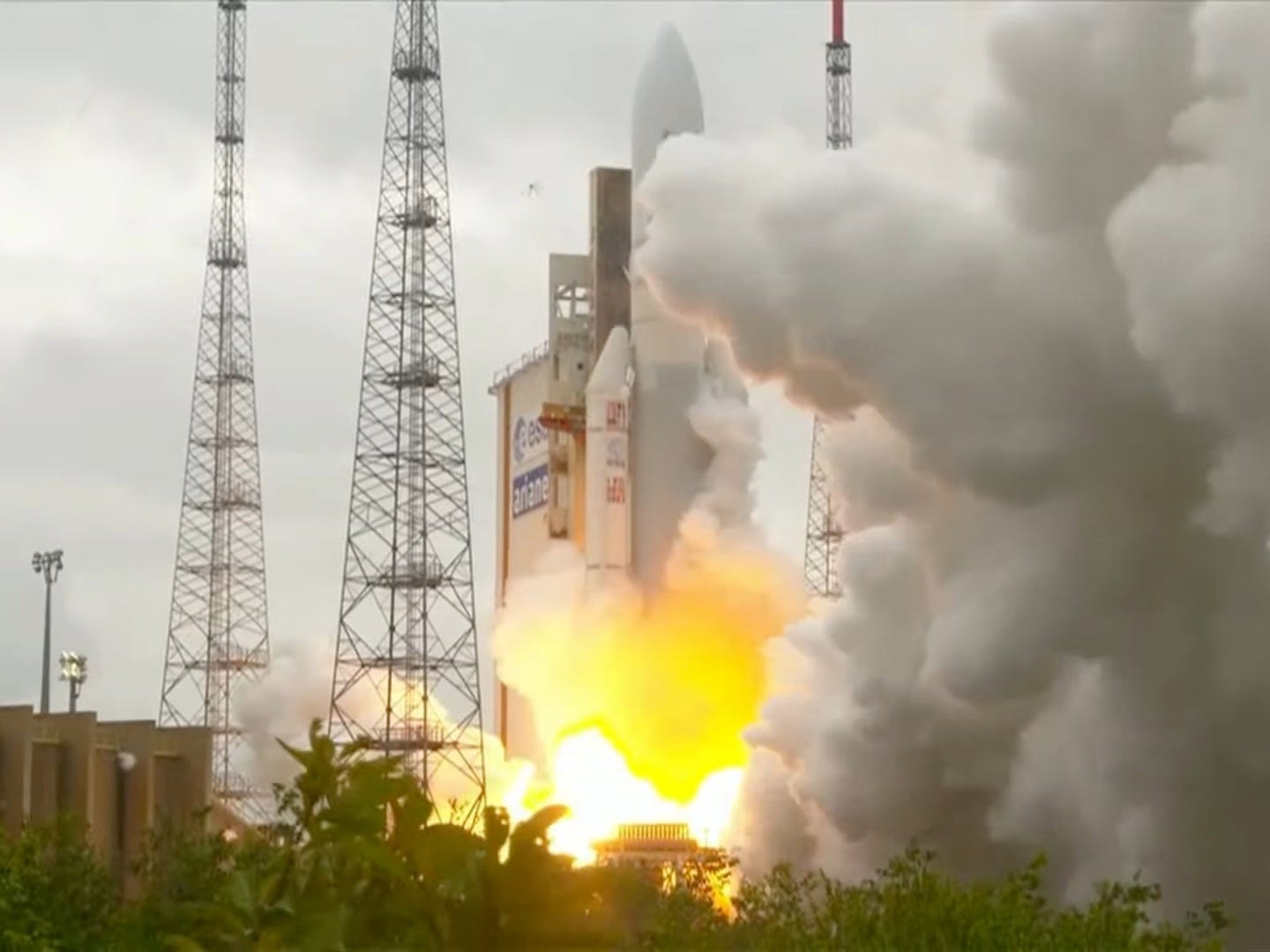 An Ariane 5 rocket, carrying the James Webb Space Telescope, lifts off from Europe’s Spaceport in French Guiana on December 25, 2021.

NASA sent $10 billion worth of delicate hardware screaming into the skies above French Guiana on Saturday, when it launched the James Webb Space Telescope at 7:20 a.m. ET.

JWST, or “Webb” for short, is the first big telescope to rocket past Earth’s atmosphere since the Hubble Space Telescope, which launched in 1990.

Webb, a collaboration between NASA, the European Space Agency, and the Canadian Space Agency, is six times larger and 100 times more powerful than its predecessor. Astronomers expect it to fill a mysterious gap in the historical record of our universe — the first 400 million years after the Big Bang — and to identify distant worlds that could host alien life.

The James Webb Space Telescope deploys its primary mirror in a Northrop Grumman cleanroom in Redondo Beach, California, on March 4, 2020.

“What I’m thinking about is looking at the universe in new light. We’ve never seen the universe as Webb will show it to us,” Thomas Zurbuchen, NASA’s Associate Adminstrator, said in a livestream minutes before the launch.

An Ariane 5 rocket, with Webb tucked inside its fairing, roared to life and heaved itself off a launchpad at Europe’s Spaceport in French Guiana at 7:20 a.m. ET on Saturday. Roughly three minutes later, 75 miles above Earth, the rocket’s nose shed its outer shell, exposing Webb. The body of the Ariane 5 rocket fell away, leaving its upper stage to fire its engines and give Webb one final boost away from Earth before it, too, separated and fell away.

A decade behind schedule and over budget, Webb finally drifted into the blackness of space. Over the next six months, it has to unfold itself, align its mirrors, calibrate its instruments, cool to a frigid minus 380 degrees Fahrenheit, and travel 1 million miles from Earth. Then it can begin to study the universe.

“I won’t breathe a sigh of relief until we declare we’re operational, 180 days after launch,” Bill Ochs, NASA’s project manager for Webb, said in a November press briefing.

Webb will unfold itself in space — with 344 opportunities for failure

It will take about a month for Webb to reach its destination: an orbit around the sun, trailing Earth by 1 million miles, which is about four times the distance between the moon and Earth. Along the way, the telescope must unfold itself — a risky proposition.

Webb has two major components: a hexagonal mirror made of 18 gold-coated segments and a sunshield the size of a tennis court, which deflects sunlight to keep the telescope cool. Both were too large to fit in a rocket, so NASA folded them up like a drop-leaf table. The James Webb Space Telescope is lowered onto the top of an Ariane 5 rocket, in an assembly building at Europe’s Spaceport in French Guiana, December 11, 2021.

“Unfolding Webb is hands down the most complicated spacecraft activity we’ve ever done,” Mike Menzel, NASA’s lead mission systems engineer for Webb, said in a video on the subject.

Webb’s design includes 344 unique mechanisms with no backup. NASA calls these “single-point failures,” since each must work perfectly for the telescope to function. About 80% of those points are part of the two-week unfolding process, Menzel said.

If it unfolds according to the plan, Webb will then spend about four months aligning and focusing its mirrors. Then the observatory will calibrate its science instruments: four cameras and spectrographs designed to observe the universe in different wavelengths of infrared light. This image, called the Hubble Ultra Deep Field, is the deepest visible-light image of the cosmos. It includes nearly 10,000 galaxies.

NASA, ESA, and S. Beckwith (STScI) and the HUDF Team

For telescopes, peering into the distance is also looking back in time. That’s because it takes time for light to travel. The farther away an object is, the older its light is by the time it reaches Earth.

Thanks to Hubble, astronomers have seen the light of ancient galaxies from 400 million years after the Big Bang. Some of those galaxies were much larger than scientists expected, meaning they grew rapidly in those first 400 million years.

“We have this 13.8-billion-year story — the universe — and we’re missing sort of a few key paragraphs in the very first chapter of the story,” Amber Straughn, a scientist on NASA’s Webb team, said in a November press briefing. “JWST was designed to help us find those first galaxies.”

During its first year, Webb is scheduled to hunt for those primordial galaxies, as well as conduct nearly 400 investigations from thousands of scientists all over the world. An artist’s impression of a super-Earth planet orbiting a distant star.

Those projects include imaging every planet, moon, and asteroid in our solar system, starting with Mars and moving outwards; analyzing distant planets’ atmospheres for gases that could signal alien life; and searching for signs of platinum and gold that’s forged when massive dead stars collide. Webb’s infrared cameras will also allow it to peer through clouds of dust that obscure the universe’s stellar nurseries, the dense regions where gases collapse into stars.

NASA has launched a controversial name into space An artist’s conception of the James Webb Space Telescope.

Webb’s name has stirred controversy. More than 1,000 people, including scientists who applied for observing time with Webb, signed a petition to rename the telescope earlier this year.

The petition argues that the telescope’s namesake — James Webb, NASA’s second administrator — helped enforce government policies discriminating against LGBTQ employees in the 1950s and 60s. The letter cites archival documents indicating that prior to his tenure at NASA, when Webb was undersecretary of state, he met with President Harry Truman to discuss enforcing those policies.

According to other documents from a 1969 court case, NASA fired at least one employee after an official interrogated him about his sexuality. The firing took place during Webb’s tenure as NASA administrator. NASA conducted a review of the historical documents this summer and ultimately decided against changing the telescope’s name.

“We have found no evidence at this time that warrants changing the name of the James Webb Space Telescope,” NASA Administrator Bill Nelson said in a statement at the time.