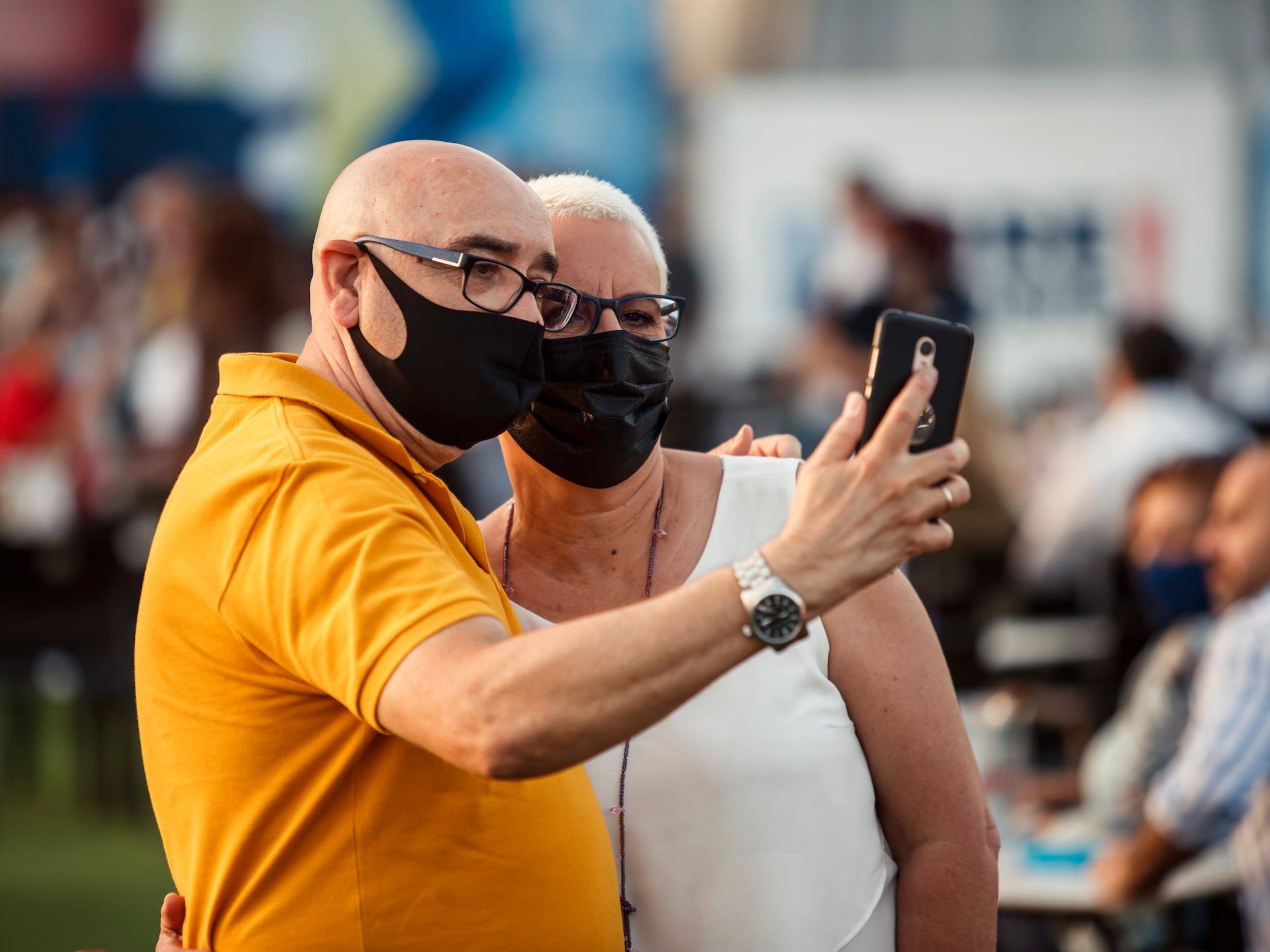 Baby boomers have shifted demographics and the economy for the past 70 years.

Named for the wave of births that occurred from 1946 to 1964, baby boomers set the tone for a post- World War II America.

They were brought up during some of America’s biggest defining events in living history, from the Vietnam War and civil rights movement to Beatlemania and the moon landing. As they entered adulthood, they sought the American Dream marked by a steady career and a house, a car, and a family in the suburbs. But they developed a here-and-now mentality that disregarded the future, which many experts and media outlets have argued came at the expense of younger generations, like millennials.

They reaped benefits from low interest rates and inflated housing prices, which increased the value of their assets. As such, many boomers have acquired enough wealth to partake in the greatest wealth transfer in modern history, which will go to their children and philanthropy.

But not everything is bright for boomers. Many still have debt and don’t have enough money saved to sustain a full retirement. And there isn’t a long-term care system yet in place for all the boomers aging into their senior years.

Here’s what life looks like for the typical baby boomer.

The post-World War II generation, boomers have been shifting the structure of the US population and economy for more than 70 years. Following the end of World War II when the US emerged as one of the world’s economic superpowers, Americans celebrated by getting busy in the bedroom. Births from 1945 to 1946 increased by 20% to 3.4 million, peaking at 4.3 million in 1957 — a number of “unprecedented” births, per the Census.

It was the beginning of the baby boomer generation, whose members now turn ages 58 to 76 this year. By 2030, all boomers will be at least 65. As of 2019, per the most recent Census data available, there are around 73 million baby boomers in the US.

They’ve witnessed some of the most important cultural and political events in American history, which have defined their upbringing. In this July 1969 file photo, Astronaut Edwin Aldrin walks by the footpad of the Apollo 11 Lunar Module.

Like all generations, boomers are shaped by key historical and cultural events. Politically, the Cuban Missile Crisis, the civil rights movement, and the Vietnam War all affected baby boomers, reported Insider’s Frank Olito. They also grew up in the Cold War and were there when President John F. Kennedy was elected — and assassinated.

Culturally, they were also defined by Woodstock, Beatlemania, and the moon landing. And, while millennials and Gen Z are the generations known for their tech savviness, boomers were first to witness the advent of some of the technology we use today. Steve Jobs and Bill Gates, the men behind Apple and Microsoft respectively, were part of the baby boom.

Their coming of age experience taught the typical boomer that they should focus on the present. Neil Howe, the economist, historian, and demographer who coined the term “millennial,” previously told Insider that boomers were raised by the GI generation, who cared about building strong institutions and looking into the future. Boomers took that for granted and developed a “live-for-today attitude,” he said.

“The boomer coming of age experience taught them that we should really trust your gut and focus more on what makes us feel good today,” he added.

They were also raised on the idea of the postwar American Dream, which they continued to chase as they entered adulthood. Their goal-centric minds valued hard work and relationships, idealizing a stable career that promised “the good life” in the suburbs with a house and a family.

While this mentality has served boomers well, many have argued that it didn’t serve future generations well. It’s why boomers have typically been blamed for ruining the economy for millennials. Howe said boomers’ coming-of-age experience is why they refuse to pay for institutional upkeep, preferring to spend money on things that change people’s lives now. “They’re not interested in making sure that the institutional framework is sustained over time,” he said.

They reaped economic benefits from this mindset, a Deutsche Bank Research report found last year. Boomers, it said, saw an increased value in assets thanks to low interest rates and inflated housing prices. They didn’t have to pay as much for education as millennials have, nor will they face the cost for environmental damage caused by the carbon emission-releasing companies in which they’ve invested.

“The magnitude of the boomers’ votes and financial resources have given them enormous political influence over the last 40 years,” wrote investor and cofounder of Oaktree Capital Management Howard Marks in a recent note. “The result has been extensive deficit spending on things the boomers want and a failure to modify benefit programs that need fixing, all at the expense of future generations.”

But the typical boomer will help out their children in the long run. They’re wealthy enough to pass down an inheritance in a process known as “The Great Wealth Transfer.” IRAs can be a good way to save for retirement, but there are different types to choose from, with each offering different tax benefits and rules.

Never have older generations had so much wealth, reported The Wall Street Journal. Boomers benefited from the post-World War II economy, it stated, which saw declining tax rates on high-income households and a strong stock market. They held onto these savings in the face of low interest rates and a declining pension system.

It put them in prime position to pass down money in their later years, known as the Great Wealth Transfer. The Journal cited the $70 trillion boomers and Silent Gen are expected to transfer between 2018 and 2042, according to research and consulting firm Cerulli Associates. About $61 trillion of that will go to their millennial and Gen X children, with the rest donated to philanthropy.

“From a big-picture viewpoint, millennials will likely receive the greatest wealth transfer in modern history — from the baby boomers,” Jason Dorsey, a researcher of millennials, consultant, and president of The Center for Generational Kinetics, previously told Insider. That’s according to a MagnifyMoney analysis of Federal Reserve data. It’s slightly wealthier than their counterparts 20 years ago, who had a median net worth of $205,200 in inflation-adjusted dollars.

Looking at baby boomers’ average net worth presents a different picture, though. That sits at $1.2 million — nearly double the net worth than Americans had at that age two decades ago, which was $747,600 in inflation-adjusted dollars. While the average net worth is likely skewed by outliers like higher-earning households, the differences between the two over the past 20 years indicates that rich boomers got even richer.

Meanwhile, millennial households saw their average net worth decline from $103,400 to $100,800 in the same time frame.

Much of that wealth comes from real estate. The typical boomer owns a home and doesn’t plan on selling it anytime soon. Three-quarters of boomers own a home, and many plan to stay in them longer than their parents did. Older generations typically begin to sell their homes to move in with their families or into assisted-living facilities or nursing homes, leaving the next generation to take over as the biggest wealth holders in real estate.

It’s a sign that boomers are “aging in place,” Kolomatsky wrote, a growing concept that the pandemic has exacerbated. It’s partly because some boomers are cautious of nursing homes in a Covid era, he added.

But other boomers are taking advantage of an appreciating housing market, per a recent Zillow report, putting their houses up for sale to downsize or move to a new town. With lifetime savings and home equity, they’re able to win out bidding wars.

But not everything is rosy for boomers. The typical boomer household still has debt, owing $28,672. That’s across credit card, auto loan, and student loan debt and excludes a mortgage, according to a LendingTree analysis. It’s not as high as Gen X, who carries a median of $37,524 in non-mortgage debt, but more than the median $24,929 millennials carry.

Boomers are most burdened by credit card debt, which an average of 81.4% of boomer consumers are dealing with. That’s more than any other generation, and they also carry the highest overall median balance of $3,958.

It indicates that many boomers are indebted as they head into their retirement years. The typical boomer over age 65 has just $58,035 saved. Data from Fidelity estimates that the average 65-year-old woman retiring in 2019 will spend $150,000 on healthcare alone in retirement, and the average man will spend $135,000. That’s  more than double the median balances.

On the other hand, more boomers retired in 2020 than any other year, bringing the total share of retired boomers to 40%. The early retirements have been contributing to the labor shortage in the US economy.

As boomers enter their golden years, the US is undergoing a demographic shift the Census calls the “gray tsunami.” An assumable mortgage lets you transfer the loan to another person

According to Census Bureau demographic statistician Stella Ogunwole, the older population is becoming more significant. “As boomers age through their 60s, 70s, 80s, and increasingly beyond, the ‘big bulge’ of the boomer generation will contribute to the overall aging of the US population in coming decades,” she said.

A higher life expectancy and declining birth rate has the Census projecting that older adults are expected to outnumber children under age 18 for the first time in US history by 2034. This means there is an increased need for caregiver and health services for people over age 65.

“This is an enormous issue,” Howard Gleckman, a senior fellow focused on health care at the Urban Institute, told CNBC. “Advances in technology and public health have allowed people to live longer in a condition of frailty, and we haven’t developed a long-term care system to keep up with that.”