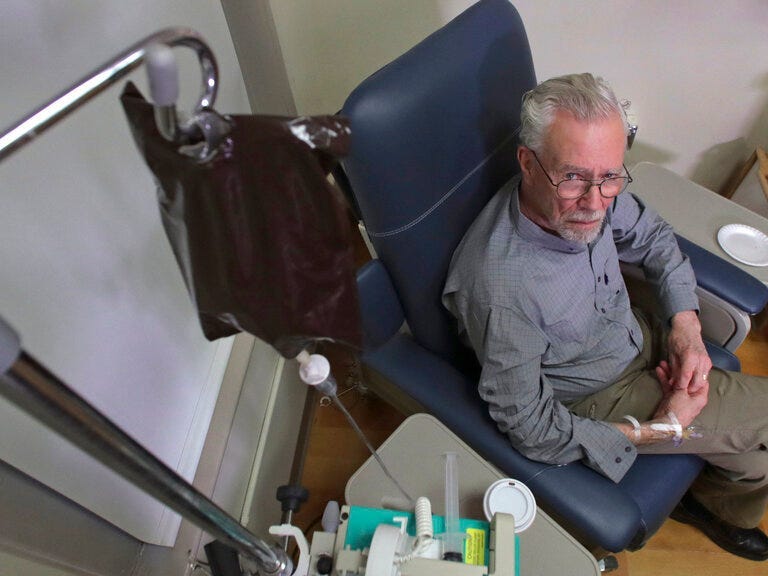 Charles Flagg, who has Alzheimer’s disease, receives the contents of an intravenous bag while participating in a study on the drug aducanumab at Butler Hospital in Providence, R.I. in November 2019.

The Centers for Medicare and Medicaid Services is making an unusual move to limit coverage of a new Alzheimer’s drug to the few thousand people participating in clinical trials.

CMS, which is the largest insurer in the US, released draft guidance Tuesday for covering drugs that treat Alzheimer’s disease using antibodies that target a harmful plaque in patients’ brains called amyloid beta. Biogen’s drug Aduhelm, which was approved in June, is the first such drug on the market, but Eli Lilly is also in the late stages of developing a similar drug.

The draft guidance limits use of these drugs to people involved in clinical trials, because drugs that target amyloid beta plaques can also lead to brain bleeds.

“As a practicing physician, I cannot overemphasize the need to understand the risks and benefits of a given treatment,” Dr. Lee Fleisher, CMS chief medical officer and director of the center for clinical standards and quality, said during a media call. “We do know based on some of the evidence that there may be potential promise with history. That’s why it is critical to receive additional scientific evidence.”

CMS plans to release a formal decision by April 11.

The guidance is a blow for Biogen, which has struggled to get healthcare practitioners and insurers to embrace Aduhelm, leading to one of the worst drug launches in modern history. Alzheimer’s disease affects around 6 million people in the US. About 5 million of them rely on Medicare, so getting the federal insurer to cover the drug is key to Biogen’s business.

“Anything that starts to provide access in this country — the number one market in the world — is good news. It means that the door is open,” Biogen CEO Michel Vounatsos said during the J.P. Morgan Healthcare conference Monday. “Really, the launch starts once you have reimbursement.”

The decision is a hiccup after a controversial FDA approval

Biogen ran two late-stage clinical trials of the drug, one of which failed to show any benefits for patients, while the other appeared to show Aduhelm worked. The FDA ultimately decided to approve the drug through a special mechanism called an accelerated approval, which means Biogen can begin selling Aduhelm but needs to run a new clinical trial to prove it works.

Biogen plans to start a 1,300-person study later this year.

Physicians like University of Southern California neurology professor Lon Schneider and Mayo Clinic neurologist Dr. David Knopman have told Insider the drug never should have received an accelerated approval. “The FDA, in using the accelerated approval mechanism, they could not endorse any evidence of demonstrable clinical benefit. That’s what their press release said in so many words. That seems illogical to me,” Knopman said in June.

States like Oregon, meanwhile, are hoping to get out of a federal policy that requires their state Medicaid programs  — which serve low-income households — to cover drugs like Aduhelm that receive an accelerated approval.

CMS had already raised Medicare premiums to accomodate Aduhelm, which cost $56,000 until Biogen cut the price on Jan. 1. The agency is now reassessing that price hike.

SVB Leerink analyst Marc Goodman had originally thought that Aduhelm sales could reach $31 million in 2021 and $525 million in 2022. But many healthcare centers and insurers have shied away from offering the drug so far. As a result, Aduhelm had made just $3.3 million by the beginning of December, causing its stock to drop by 40%.

A surprise retirement of Biogen’s head of Research and Development in November 2021 also shook investor confidence.

After news of CMS’ decision came out, Biogen’s stock fell more than 5% on Tuesday evening.