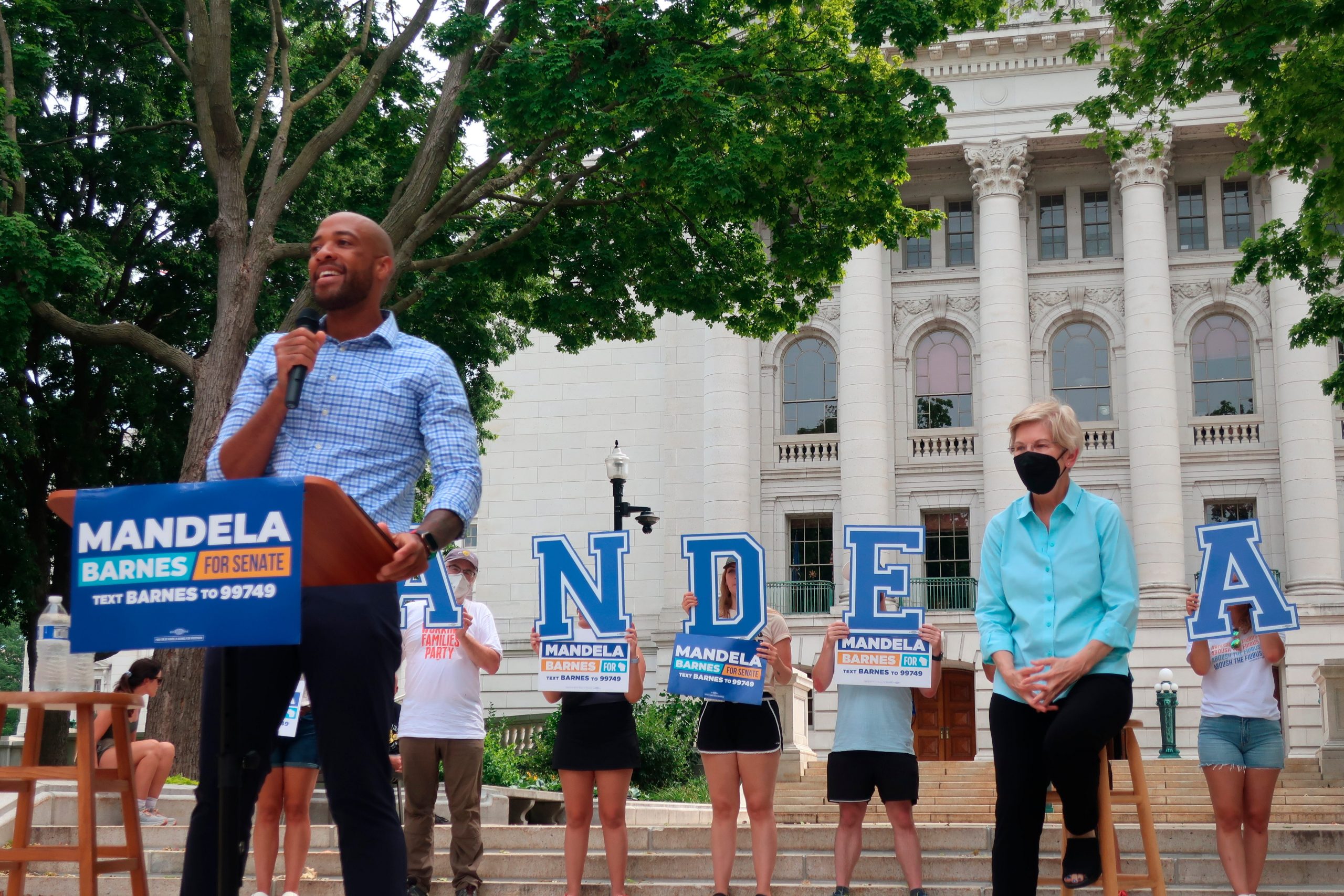 Wisconsin Democratic Lt. Gov. Mandela Barnes has a seven-point lead over two-term Republican Sen. Ron Johnson in one of this year’s marquee Senate races, according to a new poll conducted by Marquette University Law School.

The survey showed Barnes with 51% support among registered voters in the Badger State, while Johnson received 44% support; three percent of respondents were unsure of which candidate they would support in November.

In Wisconsin, both Barnes and Johnson are performing well among their respective bases. But the swing state, which has backed Democratic nominees in seven of the last eight presidential contests, has become sharply polarized in other statewide races.

Among the pool of registered voters, Barnes received the support of 95% of Democrats, with 4% of party voters crossing over to back Johnson.

Johnson earned the support of 92% of Republicans, with 7% of GOP voters indicating they would vote for Barnes.

Independents gave a clear edge to Barnes in the latest survey, with the Democratic challenger ahead of Johnson 52%-38%, a significant shift from June, when both men were tied at 41% support among this pivotal voting group.

Voter enthusiasm is quite high among members of both parties. Eighty-three percent of Republicans indicated they will vote with absolute certainty this fall, compared to 82% of Democrats, per the poll. Sixty-six percent of Independents said they are certain to cast a ballot in the upcoming election.

Last week, both Barnes and Johnson performed strongly in their respective Senate primaries. Johnson has long enjoyed strong support among grassroots conservatives and remains a political ally of former President Donald Trump — making his renomination as the Republican Senate nominee a no-brainer. But Barnes has spent most of the year locked in a competitive primary.

Until last month, Barnes’ top challengers were state Treasurer Sarah Godlewski, Outagamie County Executive Tom Nelson, and Milwaukee Bucks executive Alex Lasry, but all three left the race within the span of two weeks and threw their support behind the lieutenant governor — who since 2019 has been the governing partner of Democratic Gov. Tony Evers in a state with a GOP-controlled legislature.

Evers, who is running for reelection to a second term, leads GOP gubernatorial nominee Tim Michels 45%-43% among registered voters and 46%-44% among likely voters.

Barnes, a former state lawmaker, has gained a high level of visibility crisscrossing the state to visit localities from his native Milwaukee to rural Bayfield County in his capacity as lieutenant governor.

But despite the polling lead, it won’t be easy to topple Johnson, who despite having a 38% favorability rating in the survey, was able to defeat former three-term Democratic Sen. Russ Feingold in both 2010 and 2016 and is running for reelection is what could be a strong Republican midterm cycle.

While Barnes has emphasized his plan to expand the Child Tax Credit and touted his support of federal voting rights legislation, Johnson has continually criticized President Joe Biden over the economy and immigration, among other issues.

The race presents a major opportunity for both parties. Trump won the state in 2016, but Biden flipped it back to the Democrats in 2020 — highlighting its political competitiveness.

And in the evenly-divided Senate, where Democrats control the upper chamber by virtue of Vice President Kamala Harris’ tiebreaking vote, a net gain in seats for the party would give them the breathing room to pass bills without having to receive mandatory buy-in from moderate Sens. Joe Manchin of West Virginia and Kyrsten Sinema of Arizona.

While Manchin played a key role in crafting the Inflation Reduction Act, which includes record funding for climate initiatives, the lawmaker also single-handedly dismantled the more expansive Build Back Better Act, the now-defunct social-spending package that was backed by most Democratic lawmakers on Capitol Hill.

Marquette Law School polled 811 registered voters from August 10 through August 15; the survey had a margin of error of plus or minus 4.2 percentage points.