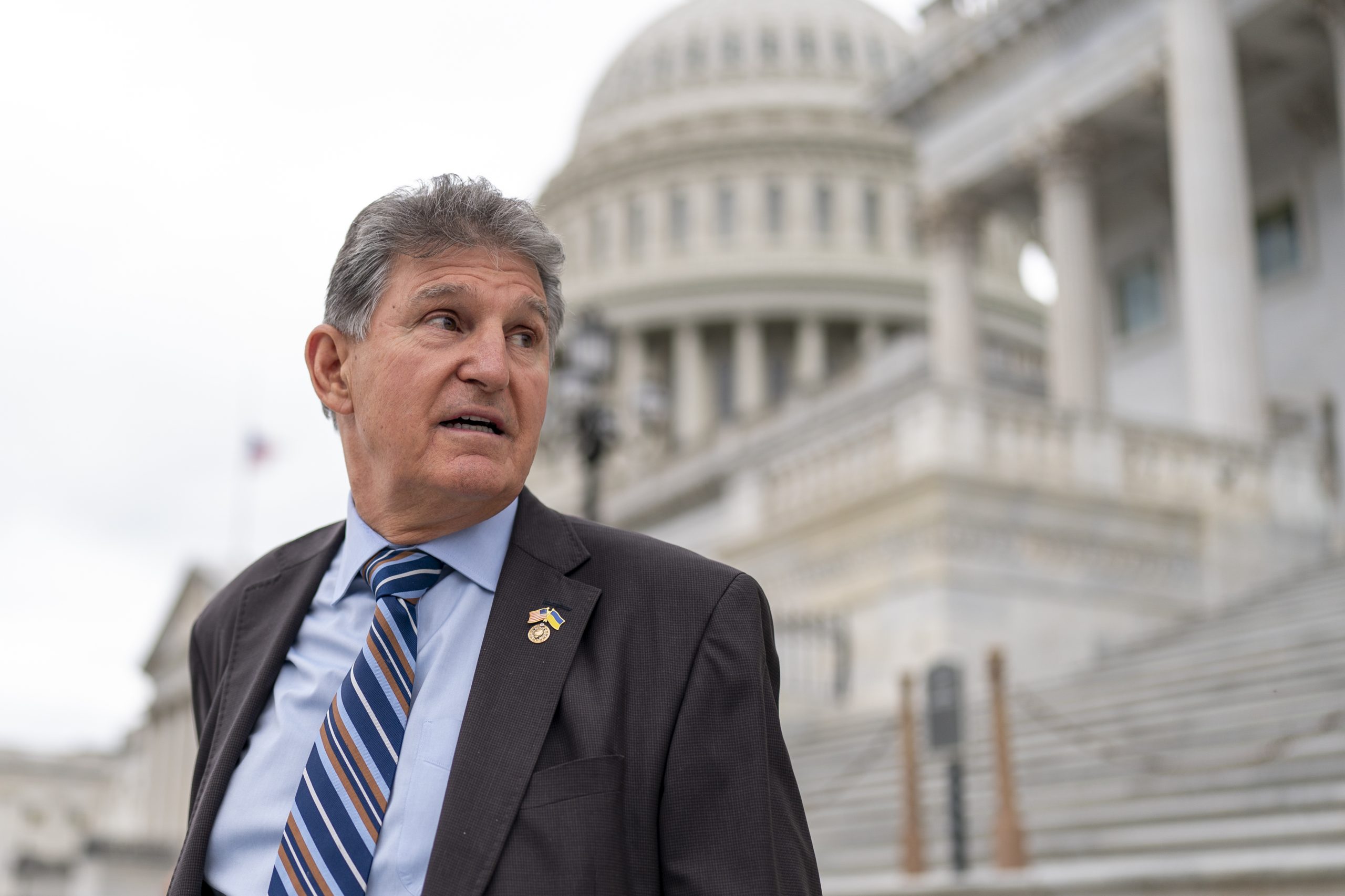 Joe Manchin is forcing Democrats into a brutal choice: Take a deal now to lower the costs of health care premiums and prescription drugs, or try to negotiate a larger bill in September that includes climate and tax reform with no guarantee it will pass.

The West Virginia Democrat said Friday that he wants to see another month of inflation numbers before considering legislation that might increase taxes on some higher-income Americans and plow hundreds of billions of dollars into the energy sector. On Thursday Manchin “unequivocally” rejected July or August approval of Democrats’ proposed energy investments and tax increases in a meeting with Senate Majority Leader Chuck Schumer, according to a person briefed on the meeting.

Manchin told West Virginia radio host Hoppy Kercheval that he’s not cutting off negotiations with Schumer. But when it comes to the legislation that would spend $500 billion and raise $1 trillion in revenues, he advised his colleagues, “come back the first of September and pass this legislation if it’s a good piece of legislation.”

“If you’re on a political deadline, and it has to be done in July, the one thing you know you can get done is basically … reducing drug prices, letting Medicare negotiate, that saves about $280 billion. over 10 years. Take 40 billion of that and extend the Affordable Care Act, the discounts that people were getting,” Manchin said.

Democrats are reeling after Manchin’s communication to Schumer indicated that climate change and tax provisions are unworkable for any party-line bill considered this summer. And since Manchin stopped short of agreeing to vote for anything bigger in September pending inflation numbers due next month, they would plunge into uncertainty if they don’t take the smaller deal on the table.

The Thursday night meeting between Schumer and Manchin blew up weeks of discussions over a larger deficit reduction package and potentially leaves just a slim health-care focused bill as a option for Democrats hoping to send far more expansive legislation to President Joe Biden’s desk. Health care premiums are typically set in the summer, so if Democrats waited until September they’d risk infuriating voters before the midterms — with no ironclad assurance from Manchin that he’d agree to a larger proposal.

The health care deal Manchin offered would reduce premiums for two years; Democrats were seeking a permanent solution due to Manchin’s own past insistence that new programs not be made temporary and were all paid for.

Manchin himself first proposed this year keeping a so-called reconciliation bill, which can avoid a GOP filibuster, focused on deficit reduction, climate spending, tax increases on the wealthy and corporations as well as prescription drug reform.

“All of our efforts should be: How do we reduce the gas prices, the high prices of energy, the high prices of food, all of these things: that’s every day living. And everyone’s talking about everything except though things,” Manchin said in an interview earlier this week. “Unless you can get your financial house in order, you’re not going to get inflation under control.”

Manchin’s rejection of Schumer’s offers for broader legislation sparked deep frustrations from progressives, particularly those who saw Democrats’ control of Congress and the White House as a long-sought opportunity to rein in carbon emissions. It could be several years before Democrats find themselves with control of both chambers of Congress and the White House and the ability to unilaterally pass pieces of their long-term agenda.

“It’s important that every young person, every activist, the majorities of this country who are demanding climate action understand very clearly this is not the Democrats,” Huffman added in an interview. “This is one man named Joe Manchin. When it comes to the most important existential issue of our time, this man is a wrecking ball.”

Democrats were willing to make severe concessions for Manchin to try and get something more expansive done this summer. Schumer offered to send half the bill’s new tax revenues to deficit reduction, cut subsidies for electric vehicles, nix direct payments to companies that produce consumer clean energy and even support permitting reform for more drilling, according to the Democrat briefed on the talks.

Manchin had sought to shave down an energy package originally set at more than $500 billion to $300 billion or less. He balked privately at sending money to the EV industry and the Direct Payment program.

Despite his general support for increasing taxes on corporations, Manchin said on Kercheval’s show that he was unwilling to install a 15 percent corporate minimum tax rate at the moment because of worries that “other countries aren’t following suit … we took that off the table.” He said Friday that conversations about energy policy with Schumer were “positive.”

Democrats are seeking to raise taxes on very high earners, force some so-called “pass-through” companies owners to contribute more in Medicare taxes and crack down on low tax corporations.

This February, Manchin laid out what he might be able to support: investments in energy, lowering prescription drug costs, reducing the deficit and tax reform. He has consistently said he supports rolling back the 2017 GOP tax cuts.

Democrats may decide to take Manchin’s slim offer given the insurance premium hikes that will occur this fall without action on health care and the party’s long-sought goal of lowering drug prices. What’s more, it would stave off a political disaster for the party trying to keep its tenuous hold on the evenly split Senate.

But that would be just a fraction of what Democrats once set out to do.

Last year they laid out a package costing trillions of dollars and reshaping the country’s education, tax, climate and housing policies. And just a year ago Manchin signed a document with Schumer indicating potential support for a $1.5 trillion bill.

The House eventually passed the smaller Build Back Back Better bill. But Manchin rejected it in December. In March he laid out a blueprint of a potential deal: “The revenue producing [measures] would be taxes and drugs. The spending is going to be climate.”

As he ended his interview with Kercheval, Manchin insisted he wasn’t pulling out of talks with Schumer. In vintage Manchin style, he said that “I’m not stopping … I am where I have been.”

Josh Siegel contributed to this report.