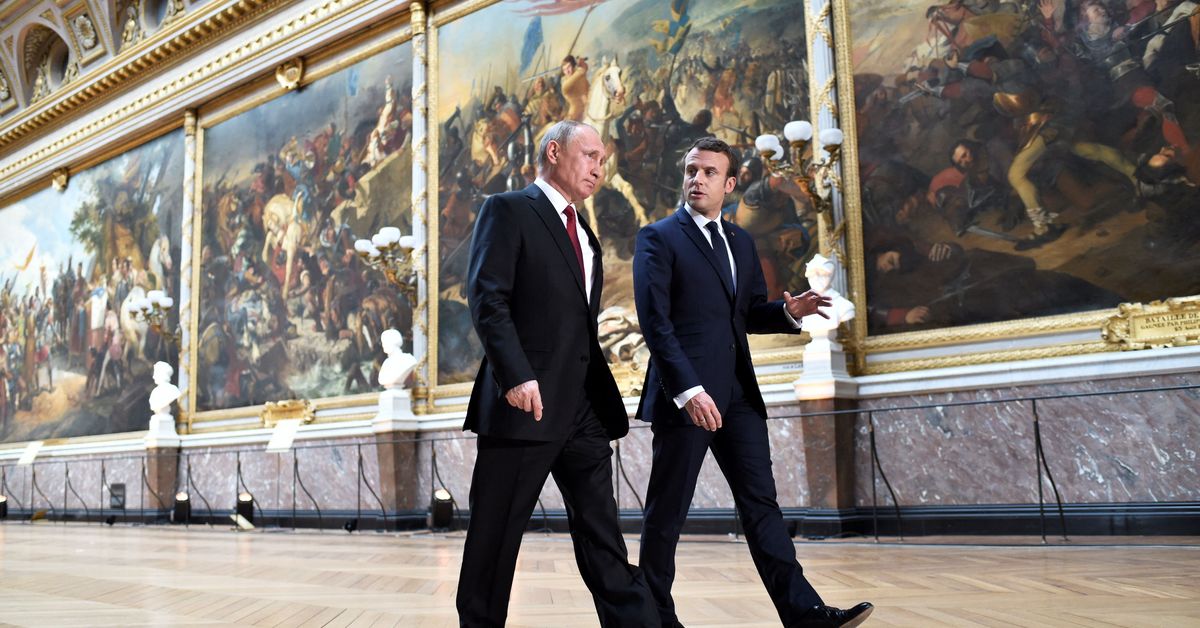 Robert Zaretsky is a professor of French history at the University of Houston. His latest book is “The Subversive Simone Weil: A Life in Five Ideas.”

In the summer of 2017, shortly after he was elected president of France, Emmanuel Macron welcomed his Russian counterpart Vladimir Putin at the palace of Versailles. It was the first of several meetings between the two men, encounters in which the French president has sought to bind the Russian leader closer to Europe — ultimately without much to show for his efforts.

Last week, the latest iteration of this dialogue culminated in an anticlimactic call between Macron and Putin, even as Russian soldiers and equipment massed on the border with Ukraine. By all accounts, the conversation was — as much of their interchanges have been — a dialogue of the deaf.

Macron insisted on the inviolable integrity of Ukraine’s borders. Putin replied that Europe was ignoring Russia’s legitimate national security concerns. All they could agree upon, according to official sources, was the need to continue talking.

As president, Macron has eagerly embraced the so-called régalien powers — those of national defense and foreign policy — that come with his five-year stay in the Elysée Palace. What better stage than Europe — and indeed the globe — to exercise what Macron had described, in somewhat unfortunate phrasing, as the “Jupiterian” powers of his office?

That Putin was the first world leader to enter Jupiter’s orbit was not accidental. In “Révolution,” Macron’s 2017 campaign book, he underscored the importance of maintaining a dialogue with Putin, despite the latter’s recent incursions into Ukraine: “It would be a mistake to break ties with this eastern European power [over Crimea] rather than forming a lasting relationship.”

With Versailles as a backdrop to their first meeting, a symbol of France’s former imperial greatness on the 300th anniversary of Peter the Great’s visit to the palace, Macron believed he could remind Putin of his hero’s attachment to Europe — and, especially, France. Peter the Great, he declared, “symbolizes the Russia that, opening up to Europe, was inspired by everything great and strong there.”

Two years later, in 2019, Macron again hosted Putin, this time at his official retreat of Brégançon on the Riviera. At their joint press conference, Macron echoed former President Charles de Gaulle’s declaration that Europe extended from the Atlantic to the Urals by affirming his belief in a “Europe that goes from Lisbon to Vladivostok.”

More strikingly, he also announced his ambition to create a “new architecture for security” for Europe — presumably one apart from the existing architecture of NATO. The surprise created by this announcement had not yet subsided when, a week later, Macron made clear in a speech to his diplomatic corps that he would brook no dissent from a “deep state” in his pursuit of this new strategy.

Another two years later occurred perhaps the oddest episode in Macron’s dialogue with Putin: On July 13, 2021, a Russian plane landed in Paris with the body of the 18th-century French general Charles Étienne Gudin, who had died during Napoleon’s invasion of Russia in 1812. Not only was the passenger dead on arrival, so too was the reason for his trip.

The return of Gudin’s remains — unearthed from under a night club in Smolensk — had been put in motion by presidential aides, and Macron was convinced that a grand ceremony with Putin in attendance would strengthen diplomatic ties between the two countries. But his plans were derailed by the Kremlin’s attempted assassination of opposition leader Alexei Navalny.

So far, Macron’s outreach has not borne fruit. Yet much to the confusion and consternation of seasoned observers, he has kept talking with Putin even after Russian interference in France’s 2017 elections, as well as Moscow’s apparent role in the recent political upheaval in Mali. He has also continued his charm offensive despite Putin’s assertion that the Kremlin’s treatment of political opponents was no worse than the French government’s treatment of yellow vest protestors — a provocation amplified by French cable channels Russia Today and Sputnik.

As the diplomat Michel Duclos remarked, “The more that dialogue does not lead to substantial results . . . the more the president insists on the necessity of dialogue.”

But Macron’s latest diplomatic salvo may have an ulterior motive, which comes as he gets ready to seek reelection in April. His efforts now are addressed not only to the audience of one in Russia, but to the audience of many in France.

Through his pursuit of Putin, Macron is pursuing a place on the European stage, and the stars might just be aligning in his favor. What remains to be seen is whether he can turn the prospect of talks to his electoral advantage — or whether Jupiter’s gravitational force will fall short, and yet another Russian snub will reveal his statesmanship as ineffective at just the wrong moment.