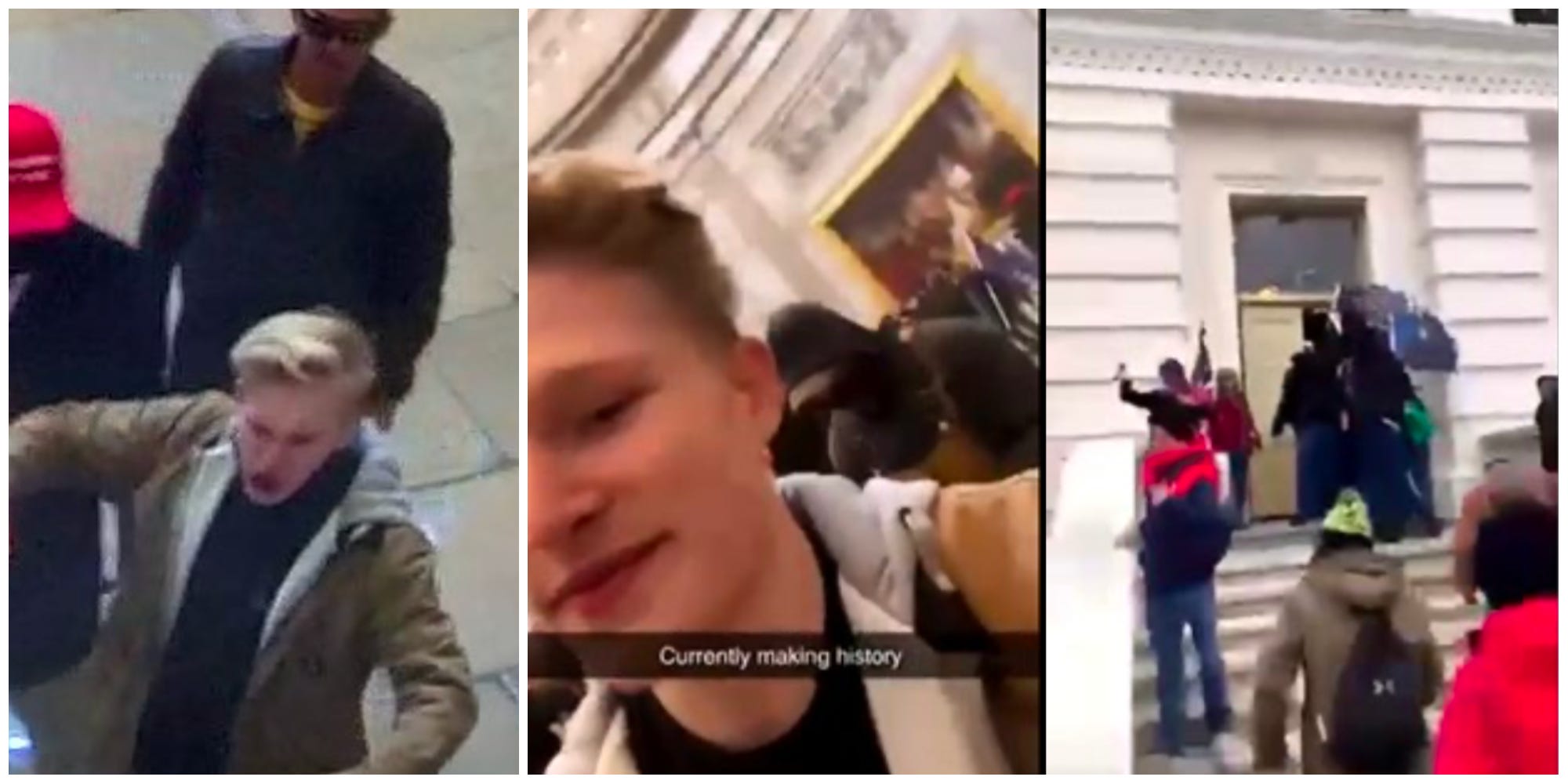 Security and Snapchat images seized by the FBI in their criminal complaint about suspect Leonard Pearso Ridge.

The defense lawyer for a young Capitol rioter said he should avoid prison, arguing that he deserves credit for caring about politics.

Leonard Pearso Ridge, who was 19 at the time, took a plea deal and admitted entering a restricted building on January 6. He is due to be sentenced on January 4, 2022.

Ridge’s attorney argued that other people his age are more concerned with social media, and said Ridge’s activism was commendable up to the point he joined the riot.

Sentencing guidelines outlined in Ridge’s plea deal give an estimate of up to six months in prison and between $2,000-$20,000 in fines.

In a memo filed on December 22 and seen by Insider, his lawyer Carina Laguzzi pleaded with the judge to consider skipping the prison part.

Laguzzi argued Ridge should be “applauded” for his youthful political enthusiasm — aside from when it led him to crime.

“During a time when most teenagers and young adults dream only of being ‘influencers’ on social media platforms for mundane or trifle reasons, there is a great respect for his peaceful political activism,” Laguzzi wrote.

“His interest in politics is a good thing and but for entering the Capitol on January 6th, should be applauded.”

On the basis of an anonymous tip, prosecutors identified Ridge as one of the hundreds who entered the Capitol. Investigators found Snapchat posts Ridge sent from the building, and also saw him in security footage.

A complaint, filed in April, includes posts from a user with the handle “pearce_ridgez,” which were traced to Ridge’s phone number. This collage was found in a Snapchat account linked back to Ridge.

In them, the teen said: “Yeah just stormed the US capital [sic] for the first time in US history and I was a part of it.”

Posts also make reference to “me fighting riot police in the capital [sic] building” and how “we” broke into Mitch McConnell and Nancy Pelosi’s offices.

His plea deal with the DOJ doesn’t support the last claims, saying there was “no evidence” Ridge broke into offices.

She also talked about the strains of pandemic year on the teen at the time of the riot.

“Mr. Ridge especially suffered from the emotional aspect of suddenly being cut off from friends and major social events that he has looked forward to for four years including; prom, Senior Spirit Day, and the senior year picnic,” she wrote.

The filing also included dozens of positive character testimonies from members of Ridge’s family and wider community, who said he has a willingness to help friends and family and a polite attitude.

In one, Frank Spires, a man identifying himself as Ridge’s neighbor and as a “42 year veteran of Philadelphia Police Department” asked the judge for leniency.

Using a nickname for Ridge, he added: “If I felt Pearce did this on purpose or he was a bad kid I would never have written this.”