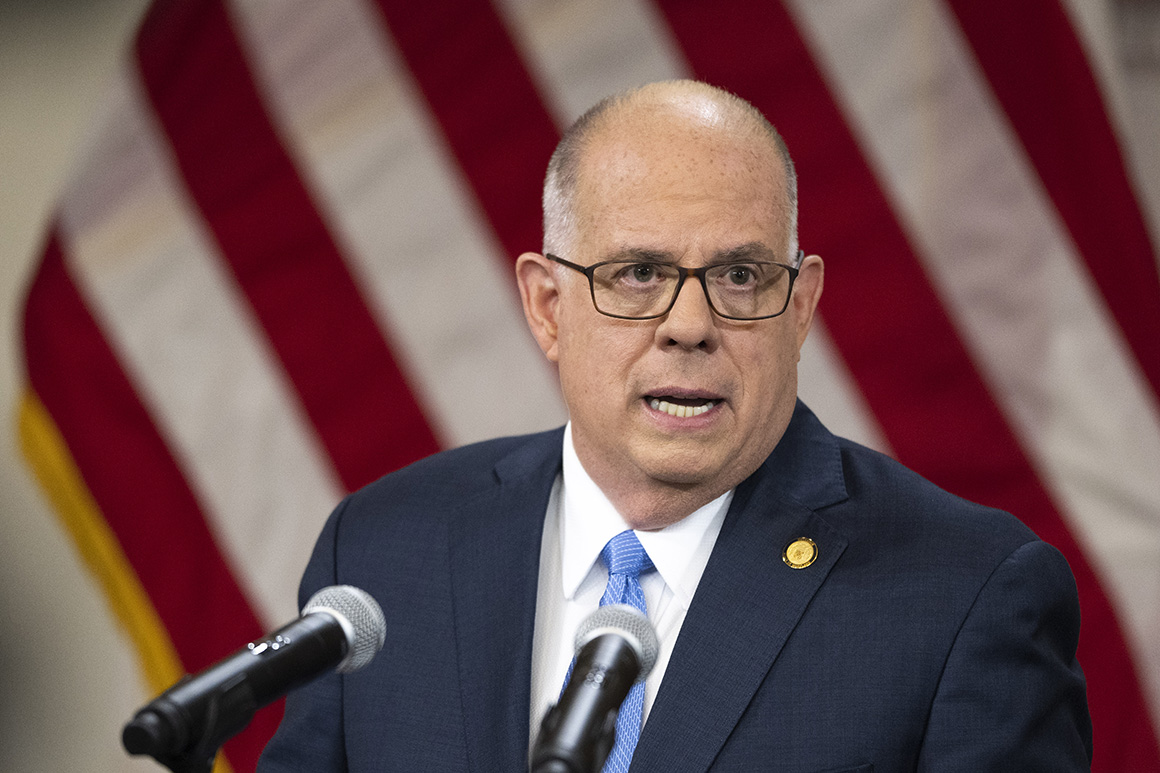 When Rep. Jaime Herrera Beutler — a Trump impeachment backer whom the former president is aggressively targeting for defeat in 2022 — threw a fundraiser last month, she was accompanied by a fellow Republican who’d trekked from the other side of the country: Maryland Gov. Larry Hogan.

The foray was part of a broader effort Hogan is launching to bolster the ever-growing list of Republicans former President Donald Trump is trying to oust in this year’s midterm elections. Hogan has hosted fundraisers for Georgia Gov. Brian Kemp, and he is looking at helping others, including Alaska Sen. Lisa Murkowski, another impeachment supporter facing a Trump-endorsed Republican challenger. He has loudly advocated for the Republican Governors Association to defend Kemp and other sitting incumbents under fire, a position the organization has embraced.

With the initiative, Hogan — a popular blue-state GOP governor who has said he’s open to challenging Trump for the nomination in 2024 — is positioning himself as a staunch critic of the former president and a dissenting voice in a Trump-dominated Republican Party.

“It’s crazy. We’ve got the former president going after all these really good elected Republicans, and so I’m trying to support people who I think deserve to be in office,” Hogan said. “We’re trying to help people wherever we can, and I’m sure we’re going to be doing a lot more of it.”

Hogan, who briefly flirted with waging a long-shot primary challenge to Trump in 2020, has begun building out a national political infrastructure. Last year, his supporters launched An America United, a nonprofit group that’s been promoting the governor as a bipartisan problem solver. Hogan, who cannot run for another term as governor next year, has also begun meeting with donors and speaking at national GOP events. In May, he is slated to speak at the Ronald Reagan Presidential Foundation & Institute’s “Time for Choosing Speaker Series” about the future of the Republican Party, a forum that has drawn an array of would-be 2024 contenders.

His focus has also turned to helping the Republicans who’ve taken on the former president. Hogan’s nonprofit has begun running digital advertisements bolstering Herrera Beutler (R-Wash.), a six-term congresswoman who is facing a challenge from Trump-backed Army veteran Joe Kent. The challenger has won financial support from, among others, tech billionaire Peter Thiel, a prominent conservative donor who met with Trump multiple times last year. The list of Trump critics Hogan is looking at supporting also includes New York Rep. John Katko, another one of the 10 House Republicans who voted to impeach the former president following the Jan. 6 Capitol riot. Trump, in response, has called the congressman — who has long represented one of the bluest seats held by a House Republican — “bad news” and offered to campaign against him.

“The folks that wouldn’t overturn the election, or buy into the big lie, they’re being attacked. It’s the reason I want to stand up and help them, but it’s a real problem for the party,” said Hogan, who called on Trump to resign following the Jan. 6 Capitol siege.

The governor is giving voice to concerns within the GOP that Trump’s revenge campaign against Republicans he has branded as his enemies could undercut the party by pushing candidates through primaries who won’t be viable in the general election. In Georgia, Hogan contended that by attacking Kemp and endorsing a primary challenger, Trump is “potentially going to elect [Democratic candidate] Stacey Abrams as governor.”

Hogan also argued that Trump’s decision to endorse a primary opponent to Massachusetts Gov. Charlie Baker, a fellow blue-state Republican governor, contributed to Baker’s decision to forgo reelection. (Baker, a popular figure in Massachusetts whose retirement could well hand the governor’s mansion to Democrats in November, has insisted he wasn’t “shaken” by Trump’s involvement in the race.)

The governor also contended that Trump’s attacks on Arizona Gov. Doug Ducey had undermined the GOP’s prospects of recruiting Ducey into the Senate race against Democratic incumbent Mark Kelly, potentially robbing the party of a top-tier candidate in a contest that could determine control of the chamber.

“I think the biggest threat to Republican success next year … is Trump, and Trump cancel culture, what he’s trying to do to screw up these races. And asking people to swear blind allegiance to Trump is going to cause us to lose some races,” Hogan argued.

“I think it’s having a terrible impact, and that’s why I’m trying to do my part to contain some of the damage,” he added. In Maryland, the race to succeed Hogan is also playing host to a proxy battle between the governor and the former president. While Hogan has thrown his support to former state commerce secretary Kelly Schulz, Trump is backing Dan Cox, a state delegate who has railed against mask mandates. In his statement endorsing Cox, Trump called Hogan a “RINO” — an acronym for Republican In Name Only — “who has been terrible for our Country and is against the America First Movement.”

Hogan fired back, saying he’d “prefer endorsements from people who didn’t lose Maryland by 33 points,” referring to Trump’s margin of defeat in the state.

A Hogan 2024 bid would be decidedly uphill given Trump’s ongoing, vise-like hold over the GOP. But the governor has argued there is an opening in the party for a Trump critic. Other than Hogan, only a few prospective Republican hopefuls have been willing to take on the former president. The roster includes Wyoming Rep. Liz Cheney and recently, former New Jersey Gov. Chris Christie, who, like Hogan, won two terms in a liberal state.

Hogan said he was particularly focused on helping his fellow Republican governors, two of whom — Kemp and Idaho Gov. Brad Little — the former president is looking to defeat. It’s possible the list will grow: Trump has met with Alabama Republican Lynda Blanchard, who is waging a primary challenge to Gov. Kay Ivey, though he has not yet endorsed her.

“I’m willing to help any of them,” Hogan said. “I’m going to try to do whatever I can, whatever they ask me to.”