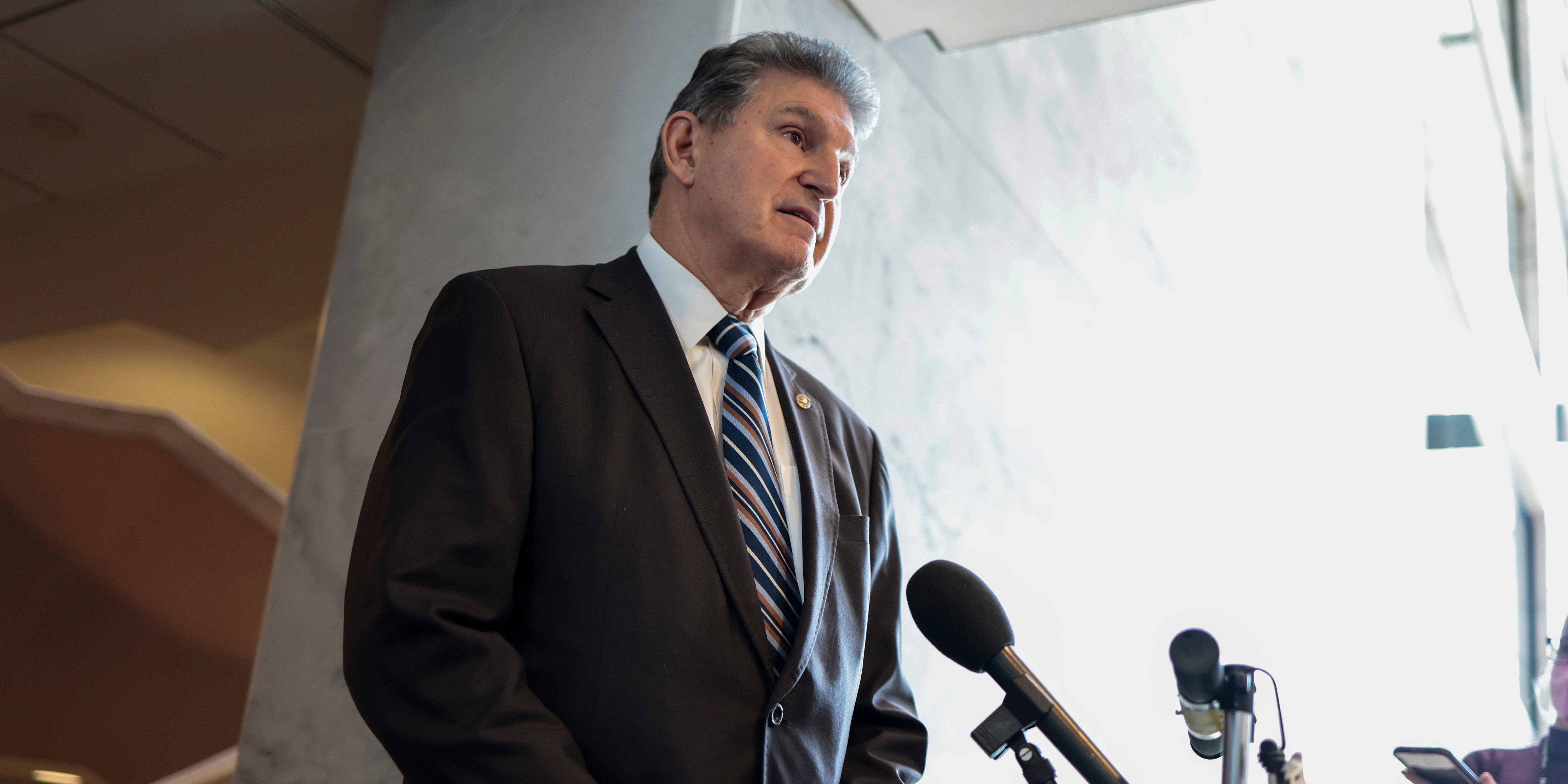 Sen. Joe Manchin (D-WV) speaks to reporters outside of his office on Capitol Hill on January 04, 2022.

Sen. Joe Manchin of West Virginia is sticking by a position he’s expressed for at least four months. The conservative Democrat wants only working parents to get the expanded child tax credit.

“I’ve been basically very clear on that,” Manchin told Insider. “I think there should be a work requirement. That means you file a 1099.”

1099 forms are typically filed by independent contractors and freelancers. A Manchin spokesperson later clarified that the senator meant he wanted families to file a W-2 form to demonstrate they’re earning enough to pay taxes.

The move to require proof of taxable income would lock out the poorest families — those with no income at all or not enough to file federal income taxes — from being able to receive checks under the expanded child tax credit. Previously, most families, including those where parents had no income in the previous year, were eligible for monthly checks.

But some experts say adding that requirement onto the federal aid could pose a fresh bureaucratic hurdle for even middle-income households. Other parents could be working as an Uber driver or a freelancer and file a different tax form that wouldn’t be eligible.

“You’ll see more people affected than you might imagine,” Elaine Maag, a tax expert at the Urban Institute, told Insider. “It won’t just be very low income families that won’t be able to meet this test.”

Manchin’s view on the benefit places him as an outlier among Congressional Democrats, most of whom favor locking in the ability of the poorest families to access the beefed-up child tax credit. The one-year child tax credit expansion was enacted under President Joe Biden’s stimulus law. It allows most families to get up to $300 each month per kid, depending on their age. It was also changed so families with little or no tax obligations could get the aid.

That expanded credit expired in December 2021, and congressional Democrats continue to haggle over whether and how to renew it amid negotations over Biden’s broader domestic spending plans.

The West Virginia Democrat effectively torpedoed the $2 trillion Build Back Better plan in late December, saying he couldn’t bring himself to support it. All 50 Senate Democrats must line up behind the sprawling measure to overcome unanimous GOP opposition.

The bill would set up universal pre-K, renew monthly child tax credit payments to American families for another year, establish federal subsidies for childcare, combat the climate emergency and more. Democrats wanted to finance it with new taxes on rich Americans and large corporations paying little in federal taxes.

However, talks on reviving the legislation has stalled. “There is no negotiation going on at this time,” Manchin told reporters on Tuesday. Instead, Senate Democrats are pivoting to voting rights for the rest of the month.

The child tax credit has drawn Manchin’s ire since the fall. He’s been skeptical of the federal government issuing monthly checks to families with no strings attached.

Yet many experts argue that allowing families to receive the aid regardless of whether they owe taxes or not would have big socioeconomic benefits. Research has shown that the child poverty rate has fallen by a third since July.

“This made a real dent in child poverty as we were coming out of the worst economic crisis since the Great Depression,” Claudia Sahm, a senior fellow at the Jain Family Institute, said in a recent interview. “That’s exactly what you go after.”