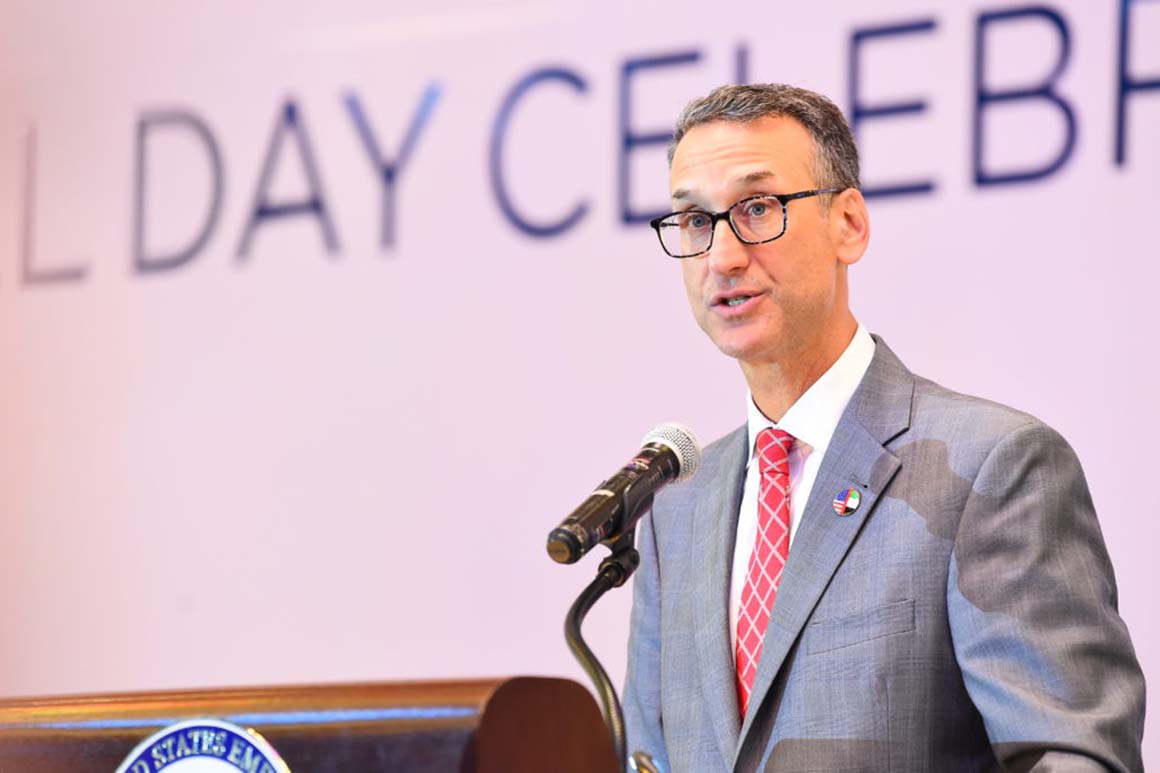 If you listen closely, you might hear the chatter. It bubbles up most noticeably in that long year after a new president takes power and hundreds of plum jobs are up for grabs and headed for Senate confirmation. Try to tune out the shouting and showboating on Capitol Hill and cable news over top Cabinet picks or judicial appointments.

Some of the nastiest fights in Washington take place out of public view, over positions most Americans know little about. Sometimes, they’re fueled by personal rivalries and animus, sometimes by ideology and ambition. Adjust your ear to this infrasound and you’ll hear the bilious whispers.

Can you believe that Biden is considering a personal friend for that prime European capital?

Shouldn’t the hedge fund pedigree, much less what seems like credible rumors of #MeToo issues, disqualify him for that Treasury job?

It’s rare this kind of talk lands beyond the ears of the few hundred people who think they run or want to run this place. But often, the careers of people who, in theory at least, are pursuing work in public service are on the line.

This is one such story you’ve not read before. It features a decorated diplomat with an unblemished record, about to claim a career-defining prize: an ambassadorial posting to a key Middle East ally. It involves serious accusations and counter-accusations of racism, none of which were made publicly. Hidden not far beneath the surface are personal histories and policy disagreements — in this case between appointees of former President Donald Trump and the “Deep State” bureaucracy that haven’t been put to bed with the advent of a new administration.

To tell the tale properly, we need to go back three years and start in Abu Dhabi, the capital of the United Arab Emirates.

In late 2018, Steven Bondy — a longtime veteran of the State Department who had served in tough countries, including Afghanistan, Egypt and Turkey — ran the U.S. Embassy in the UAE. As chargé d’affaires and acting head of the mission, his role was to manage America’s geopolitical relationship with the UAE, a wealthy Gulf petrostate, purchaser of billions of dollars of U.S. military hardware and key regional ally as Trump turned up the temperature on Iran. Bondy was also dealing with some tricky office politics. The embassy’s defense attaché, then-Brig. Gen. Miguel Correa, was an amiable if somewhat freewheeling personality who had taken on an outsized — and for Bondy, discomfiting — celebrity status in the diplomatic relationship. A Green Beret who was seconded to Abu Dhabi, Correa spearheaded a daring 2017 rescue by U.S. Special Forces of an Emirati military helicopter that had gone down in Yemen. The operation saved the lives of several soldiers — among them, a young royal who was badly wounded in the crash.

That act had vaulted Correa into the good graces of Crown Prince Mohammed bin Zayed al Nahyan, the country’s de facto ruler, and uncle and father-in-law of the wounded soldier.

According to nine former colleagues, that rankled Bondy, a lifelong by-the-book diplomat who managed the embassy staff. Bondy ran a tight ship. Correa — who was allegedly prone to taking his own meetings with high-ranking UAE officials — didn’t fit.

Bondy wanted him to heel or get out. He got the latter, eventually removing Correa from his post in Abu Dhabi with the consent of senior officials at the Defense and State Departments. Months after, Bondy raised a number of concerns about Correa, telling a Defense Intelligence Agency inspector general that his former colleague was a racist and an anti-Semite, and that he had made homophobic comments, according to two former senior Trump White House officials.

The IG report found no substantiation for those claims.

Correa soon found a home in Trump’s National Security Council. In the White House, his close relationship with high-ranking Emiratis helped seal the deal on the landmark Abraham Accords, normalizing relations between the UAE and Israel.

Correa left the Trump administration in January and retired from active duty as a two-star general in October.

Bondy moved on from the UAE to a senior adviser post at State and in April was nominated by President Joe Biden to serve as ambassador in Bahrain, a close ally that’s home to the U.S. Fifth Fleet in the Persian Gulf.

Then, more than two years after being removed from his post in Abu Dhabi and gone from government, Correa decided to share his own concerns about his former boss.

“I came forward after retirement upon hearing of his nomination,” he told POLITICO in early December, almost two months after Bondy appeared before the Senate Foreign Relations Committee for his confirmation hearing. “I wanted the facts to come out in the public for our leaders to see the entire picture.”

Correa accuses Bondy of making belittling comments about Arabs during his tenure as chargé d’affaires in the UAE from September 2017 to October 2019. “I would hear him say disparaging remarks about Arabs all the time,” Correa said.

“I recall an instance of him being dismissive of Middle Eastern staff,” added Victoria Coates, who interacted with Bondy when she worked out of the UAE embassy from mid-July to August 2020 as special energy representative to Saudi Arabia. Coates was a deputy national security adviser to Trump and served with Correa on the NSC. They are friends. Two other former Trump administration officials and another person who interacted with Bondy told POLITICO that they heard Bondy use insulting and prejudicial or racist remarks about Arabs.

In a statement to POLITICO, Bondy defended himself: “I vehemently and categorically deny these accusations,” he said. “I have dedicated my career to representing the United States and its interests in the Middle East. I have a deep and abiding respect for the peoples and cultures of the Middle East and harbor none of the prejudices attributed to me.” Bondy refused to comment further on the record.

When POLITICO approached the State Department about these allegations, it mobilized to his defense. It said Bondy had been thoroughly vetted as part of the confirmation process and described him as “a diplomat with a long and distinguished track record … with a deep appreciation of the Middle East.” The message, per State spokesperson Ned Price: How could a man who “has spent most of his 30-year career working some of our nation’s most pressing issues in that region, including two years in war zones,” and speaks Arabic fluently, possibly be a bigot?

“I never saw him speak derogatorily of our partners in the region, and that doesn’t match with any of my experience with him,” said retired Gen. Joseph Votel, who hired Bondy to be his policy adviser when he was commander of Joint Special Operations Command. “I found him to be very, very good, and he was a good and reliable adviser to me.”

Philip Frayne, who recently retired after a long career at the State Department and worked with Bondy in three different Arab countries, including the UAE, said Bondy practiced a “firm and decisive but also very respectful” leadership style when he was in charge of the mission in the UAE.

POLITICO spoke to dozens of people to report out the details of the whisper campaign.

Bondy’s opponents insisted he would be a poor U.S. envoy to an important Arab country. The alleged slurs are disqualifying, they said.

Yet other motivations were suggested. One was a desire to set the record straight on behalf of Correa, who served more than three decades in the military, including special operations combat assignments in Afghanistan, Iraq and throughout the Middle East. His allies say he was railroaded out of a job.

Others claimed Bondy lacked diplomatic tact. According to a former embassy official, he stepped in it more than once with top UAE officials. One example features the powerful Emirati ambassador to the U.S., Yousef Al Otaiba, who is estranged from his father, the former oil minister of UAE.

“Every time Bondy would see him [he would say], ‘Oh I saw your dad the other day, he’s really proud of you and what you’re doing. When was the last time you saw him?’” recalled the former official who witnessed the alleged episodes. “It was stupid stuff like that where he didn’t do his homework and was always offending them, and the rest of us looked bad because we were there trying to clean it up.” Senior UAE officials expressed concerns about Bondy in meetings with other U.S. government officials, a former senior Trump White House official alleged. At the end of one meeting in March 2018 with Crown Prince Mohammed bin Zayed Al Nahyan, the visiting senior White House official asked him about what he thought of Bondy.

A spokesperson for the Crown Prince did not respond to a request for comment.

There are policy disagreements at play as well. Some of the accusers claimed that Bondy tried to block Correa — then in his next job at the NSC — from returning to Abu Dhabi during the secret negotiations between Israel, the U.S., Bahrain and the UAE. Those conversations would become the Abraham Accords, which Correa reportedly coined, and were signed in September 2020. Yet Bondy, in his Senate hearing, professed enthusiastic support for these accords and vowed to build and strengthen these bonds were he to be confirmed for the Bahrain post.

But the partisan coloring is hardest to miss. These whispered charges were being quietly amplified by a number of heavyweight Trump NSC and Pentagon officials.

Simone Ledeen, former deputy assistant secretary of Defense for the Middle East and daughter of Michael Ledeen — a neoconservative supporter of Trump’s first national security adviser, Michael Flynn — told POLITICO she heard about Bondy’s allegedly racist comments from Correa or another colleague while she served in the Trump administration.

Robert Dias, who was the chief of attaché operations at the U.S. embassy in the UAE, said Correa repeated those allegations to him before being removed from Abu Dhabi. But neither Ledeen, Dias nor Coates came forward with these claims until Bondy was in the final stages of the nomination process, or until POLITICO contacted them directly. None of them, including Correa, whispered these allegations of Bondy’s racist remarks to senators, their staff, or other officials during Bondy’s vetting process or after his hearing they told us. The press was to be the judge and jury.

“It is shameful and should be deeply embarrassing that POLITICO would allow itself to be used to launder false allegations that other outlets and bipartisan Congressional staffers have deemed to lack merit and to be nothing more than the product of political, personal, and workplace animus,” a senior State Department official said in a statement in mid-December.

In the early hours of Dec. 18, the Senate confirmed Bondy to his post in a voice vote, along with 40 other ambassadors, putting an end to the sub rosa attempts to sink his nomination. Bondy has yet to take up his post in Bahrain.

The embassy of Bahrain in Washington did not respond to a request for comment.