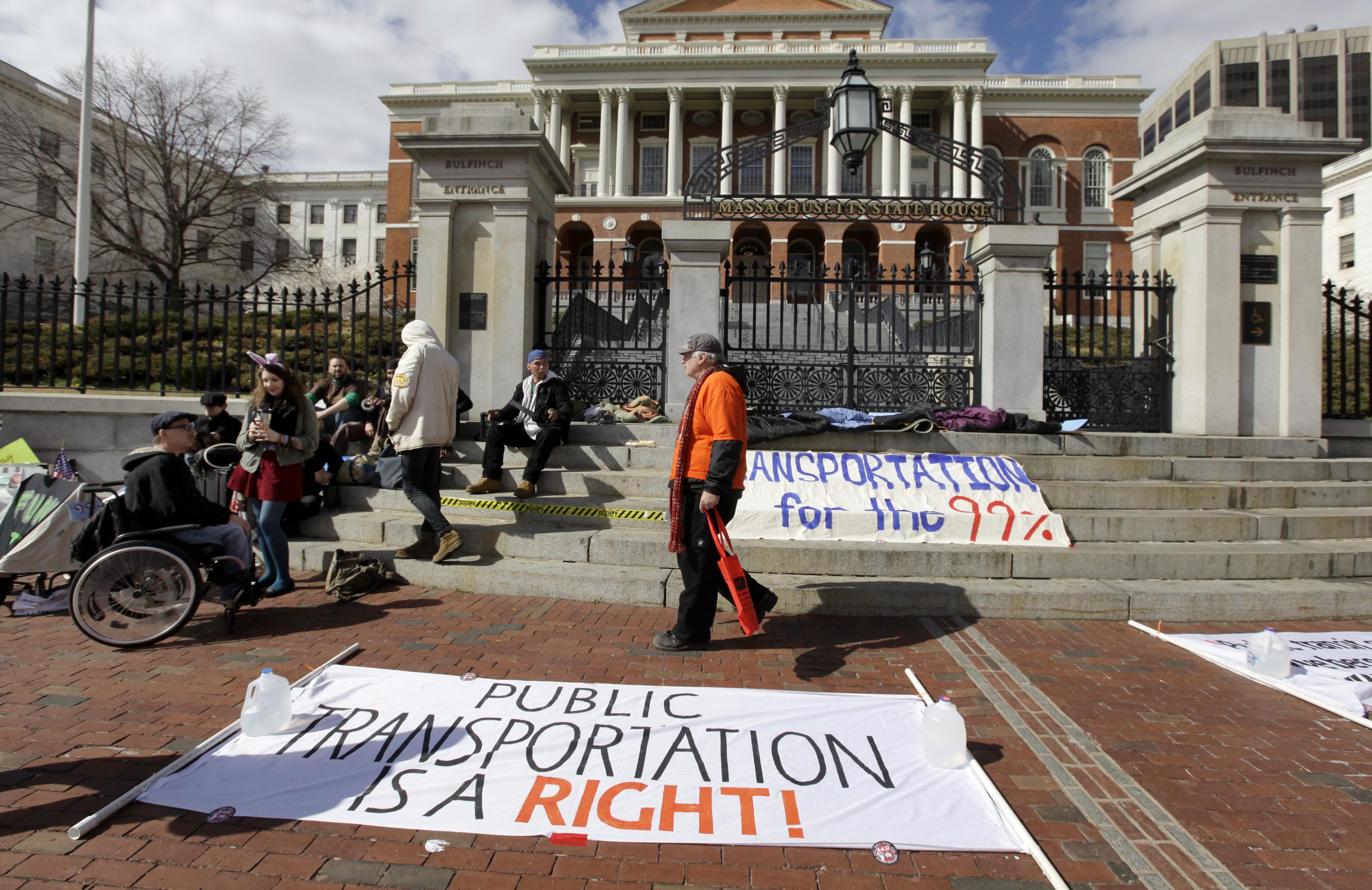 BOSTON — Michelle Wu once led a citywide revolution against public transit fare hikes. But what she really wanted was to make the system free.

Within her first 24 hours as mayor last fall, Wu filed the paperwork to make it happen on three key bus routes — a big milestone in her quixotic quest to “free the T,” the colloquial name for Boston’s public transit system.

Wu is following a long line of city leaders spanning from Kansas City, Mo., to Olympia, Wash., and several jurisdictions in the D.C. area that have pursued a similar policy in hopes of improving equity and boosting ridership.

The push for free buses and trains has long been heralded in progressive circles as a way to boost access to transportation, mitigate carbon emissions and bridge racial disparities. Now, it’s increasingly popular as gas prices hit new records and Covid-weary mayors and governors grow desperate to entice people and businesses back to urban centers.

“Cities all across the country have to rethink what we’re offering to our residents,” Wu said in an interview. “Fare free transit is a racial equity issue. It’s a climate justice issue. It’s an urgent issue related to our survival post-pandemic and how much we’ll be able to thrive in the new economy.” Some transit advocates say improving service would do more to boost ridership, get cars off the road and assist low-income riders than eliminating fares.

But offering free rides gives state and local officials one way to show they’re doing something — anything — to address the longstanding socioeconomic inequities laid bare by the pandemic and ease the pain people are feeling at the cash register as Washington spins its wheels on tackling inflation.

California Gov. Gavin Newsom proposed $750 million in grants to help transit agencies provide free rides for three months as part of an $11 billion tax-relief package he filed in March. The Chicago City Council approved Mayor Lori Lightfoot’s plan to give away 100,000 Chicago Transit Authority fare cards worth $50 each and 50,000 gas cards worth $150 each. Rising gas prices and inflation prompted Connecticut officials to suspend bus fares through June 30 — and then extend it to Dec. 1.

“There’s such a disconnect now between voters and elected officials and policy. People think they don’t see a lot of results,” said veteran Democratic consultant Doug Rubin, who worked for one of Wu’s rivals in last year’s Boston mayoral race. “So when you get an issue like fare free transit, where it’s a very clear thing people can understand and see when they get on [a bus], it becomes a very powerful issue.”

Boston’s mayor did not invent the concept. Cities like Colomiers in France and Tallinn, Estonia, have offered free rides for years. In 2020, Luxembourg became the first country to make all public transportation free. Other transit systems in Massachusetts have also made buses free to ride.

But like her peers, Wu has long pitched free transit as a way to eliminate financial barriers for commuters, expand ridership and reduce air pollution from personal vehicles.

The pandemic added another layer of urgency to her argument: Massachusetts Bay Transportation Authority ridership is still at just half of its pre-Covid levels. Hybrid work models and new variants have kept people and businesses from returning to Boston and other downtowns.

Ever-dire warnings about climate change have also accelerated the conversation about fare free transit in blue states like Massachusetts. In this year’s elections, progressive candidates from governor on down are pitching free or reduced fares as necessary for both the people and the planet — and it’s becoming a litmus test for the left.

State Sen. Sonia Chang-Díaz, the last Democrat still challenging state Attorney General Maura Healey for the party’s nomination in the governor’s race, reminds voters at every turn that she’s the “only candidate in the race” pushing for fare free transit — not Healey.

Former Acting Mayor Kim Janey set things in motion in Boston by making one key bus line — Route 28, which cuts through the heart of the city’s Black, brown and low-income neighborhoods — free for four months.

Wu hit a few speed bumps — namely that the Federal Transportation Authority puts a six-month cap on pilot projects — when she tried to expand the program upon taking office in November. But after a direct appeal to Transportation Secretary Pete Buttigieg and some negotiating with the FTA, the new mayor successfully expanded Boston’s pilot program from one route to three for two years.

Early analysis of Boston’s initial Route 28 bus initiative by both the city and the MBTA showed mixed results: Ridership was up and boarding was quicker during the first four months of the program. Yet only 5 percent of survey respondents said they would have taken a car if not for the free bus trip, undermining the claim that free transit is a climate initiative or a cure for urban congestion. The reports also found that two-thirds of riders — those who had monthly passes or needed to transfer to other buses or trains — saved no money at all.

Other cities’ experiments with fare-free transit have revealed a few harsh realities about what sounds like a great boon for transit riders.

First, while ridership on the free lines usually goes up, generally the boost comes from those who might typically bike or walk, rather than pulling people out of their cars.

Second, riders — including those with low incomes — consistently say that what really matters to them is whether the bus comes frequently enough to be useful.

“Low-income riders are just as time sensitive, if not more time sensitive, than middle-income and upper-income riders,” said Zabe Bent, director of design at the National Association of City Transportation Officials. “And a lot of that is because they’re one missed bus away from losing their jobs or getting a reprimand on their job, or late fees or childcare penalties.”

The transit think tank TransitCenter, which wrote two reports on free transit, advocates for targeted subsidies for riders who need it and encouraging employers to offer free transit passes to workers, rather than eliminating fares across the board.

“Cars are much more expensive than transit,” Elokda said. “People are willing to pay more to drive a car to gain that convenience. So until transit can match that convenience, it’ll be no match for the car.”

TransitCenter also argues that free transit programs can backfire if cities don’t match it with service improvements. “Ridership increasing is the desired outcome, but without sufficient revenue to increase service in response to new demand, agencies run the risk that riders will be turned off by delays and overcrowding,” they wrote. “In fact, that’s what happened in several US cities who tried free transit but abandoned the projects after they created more problems than they solved.”

When that dries up, it’s unclear where the money will come from to keep these programs rolling.

Democratic Rep. Ayanna Pressley and Sen. Ed Markey’s legislation to establish a $5 billion federal grant program to help transit agencies offset lost fare revenue from the programs hasn’t gained traction in Washington. And their push for funding through the Biden administration’s Build Back Better proposal stalled along with the rest of the social spending plan.

The MBTA gets around 40 percent of its revenue from the farebox. For big urban systems that traditionally struggle to fund even basic infrastructure repair and operations, it would be up to city and state governments to not only backfill lost farebox revenues but increase funding to allow for service improvements.

“Funding from fares is not enough to ensure that systems work well,” Wu said. “Public transportation is a public good. It is as fundamental as our parks and libraries and schools and public education, and we need to fund it as such.”

There’s debate among Massachusetts Democrats about whether public transit should be free or simply cheaper. Salem Mayor Kim Driscoll, a leading contender for lieutenant governor, argued in a recent WCVB interview that completely eliminating fares would make it harder to invest in a transportation system that needs significant improvements and is currently undergoing a federal safety review.

Still, as prices soar and transit systems struggle to recapture riders, free bus and train rides are increasingly alluring across the country.

And Jim Aloisi, a former Massachusetts transportation secretary who supports both Wu and her push for fare-free transit, pointed to the data from Boston’s bus pilot program.

“How do you know what you’re doing is right? You look at the data,” Aloisi said. “And what the data say is ridership goes up, people board faster, it’s a better experience. Tell me what’s not to like?”