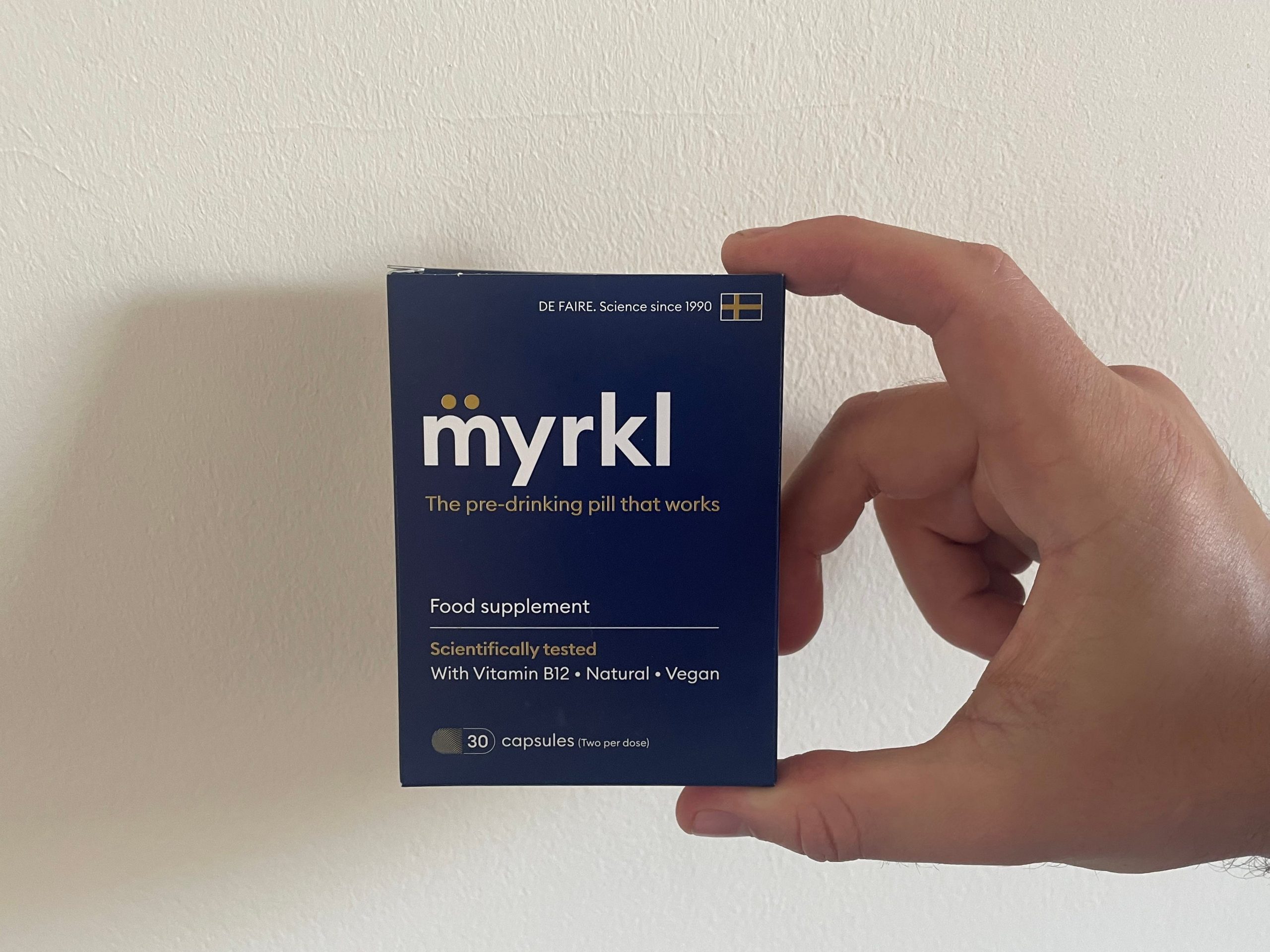 Myrkl just launched in the UK for around $35 a pack.

As long as we’ve been drinking alcohol, we’ve had to contend with the inevitable hangovers that follow.

The after-effects are helping deter some young people from booze, with a growing number embracing sobriety or turning to cannabis drinks. But technological advances mean skipping post-work drinks or a big night out may no longer be the only option.

A Swedish pharmaceutical company called de Faire Medical has come up with Myrkl, a pre-drinking pill that is “the first product in history to break down alcohol effectively,” or so they claim. I decided to put the pill, which has been 30 years in the making, to the test.

According to its website, Myrkl breaks down 70% of alcohol within an hour. It says that after taking the pill, alcohol in the gut is broken down into water and carbon dioxide, rather than the usual acetic acid, which is the culprit for the worst hangover symptoms.

It claims its prime ingredients of “Myrkl bacteria” and L-cysteine, a non-essential amino acid previously touted as a “hangover cure,” is the key. Experts, though, told Verywell Health they wouldn’t trust limited research on its ability to ward off hangovers.

A good dose of vitamin B12, a nutrient typically found in meat, is meant to add a jolt to your recovery.

They’re available in the UK and some other European countries but Myrkl did not say when they go on sale in the US.

I have no prior experience with hangover prevention tools. However, I am all too familiar with the usual symptoms including tiredness, nausea, headaches, lowered productivity, and ordering a McDonald’s the next day in a desperate attempt to tell human again.

I hoped Myrkl could help me wind down without playing catch-up physically for days.

I took two pills an hour before heading to drinks in London’s Regent’s Park for a summer party, firmly aware I had to work the next day. I was firstly surprised at just how chunky the pills were. At about an inch long, they weren’t your typical aspirin.

I didn’t feel anything out of the ordinary while I drank, going through the usual Healthline-specified stages of euphoria, excitement, and eventual drowsiness. It seems the pill doesn’t have any noticeable impact on the feeling you get while drinking.

As the night wound down, I realised I’d probably overdone it a bit with my drinking, and began to worry I’d ruined the experiment.

But when I woke up the next day after six hours of sleep, I was amazed at how fresh I felt. My heart rate felt normal, and my usual headache and nausea were non-existent, and I didn’t feel dehydrated. It felt like I’d barely had anything to drink the night before.

By the afternoon, though, the symptoms slowly crept in, including a headache, some dehydration and intense tiredness. But I would say it was still relatively mild compared with hangovers in the past, and I was strangely grateful to be eased into it throughout the day.

Overall, Myrkl seemed to help me grapple with hangover symptoms and sustain my productivity without forcing me to sacrifice post-work drinks. It feels like a breakthrough, but I do wonder if it might encourage more excessive drinking.

While the best option is always to limit your alcohol consumption, Myrkl might make happy hour a little more cheerful.