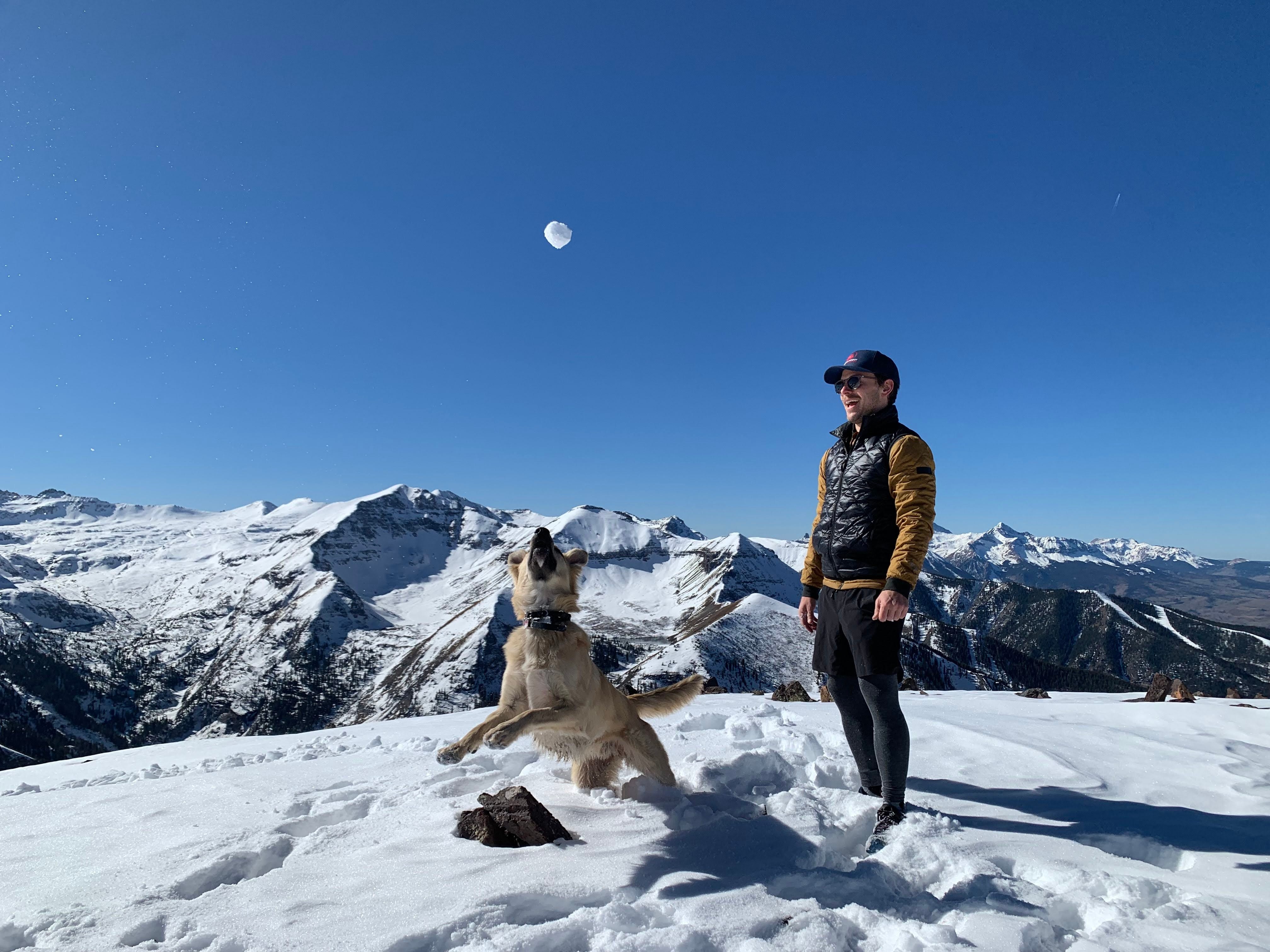 Ty Wilson with his roommate’s dog, Boru, at the top of Ajax Peak, which overlooks the town of Telluride in southwestern Colorado.

This as-told-to essay is based on a conversation with Ty Wilson, 32, who recently moved to Telluride, Colorado, from Boston.

His story is part of “Moving Truck Diaries,” an Insider series sharing the stories of Americans who have moved states since the start of the pandemic. It has been edited for length and clarity.

When the pandemic hit, I was experiencing some of the antsiness that a lot of people were. Ultimately, the right thing for me was to get more time in nature and more time outside.

I moved to Telluride from Boston in October 2020 for what was meant to be a few months to ski and work remotely. I fell in love with the lifestyle and am making the move permanent.

I grew up in Acton, Massachusetts, which is a Boston suburb. I went to Amherst College in western Massachusetts. After that, I moved to Boston. I spent probably 10 years in Boston, between the North End, Central Square in Cambridge, and Back Bay. Boston’s Back Bay neighborhood, where Wilson lived after college.

Boston is wonderful — but not known for its outdoors.

I kind of had this idea that at least at once in my life, I should spend the winter in a ski town. It’s something I’ve had in my head since I was about 12.

With a few other people, I started a company in 2015 called CustomMade, and I’m now the chief operating officer. We sell custom engagement rings and other fine jewelry online. We had a lot of people working remotely even pre-pandemic, but the management team was centered around the Boston area.

If you can do it, why not winter in a mountain town?

That was the initial plan. I knew there was a chance that I might get hooked, but I still had my apartment in Boston when I moved out there.

I’ve been coming to Colorado basically every year for about 15 years. I’ve skied most of the mountains in the state and had a magical experience in Telluride — the nature, but also how friendly people were. A view overlooking the town of Telluride at sunset.

Housing in Telluride is hard to find.

I ended up connecting with a friend of a friend on Facebook who had an open room in a place that he’d rented. We both moved at about the same time, in October 2020.

I’m now in my third rental here. It’s an eight-month winter rental, and the owner comes back during the summer. It’s a beautiful and charming old house, probably from the late 1800s. We’ve got great mountain views from the front porch. It has three bedrooms and one bath, which I share with two roommates.

It’s different from some of the amenities I had in Boston, but the location is great. The view from the front porch of Wilson’s rental home in Telluride.

The natural beauty of Telluride lives up to the hype.

We were still in the heart of the pandemic when I arrived, and soon after I got here, cases started to surge in the area. So there was this balance of wanting to be social and meet people, but also trying to stay safe, be responsible, and not spread COVID. It was a little bit of a slow start in terms of making new friends.

But once ski season started, it was great. It’s an incredible community, and I made some amazing friends. But it took a little bit.

During the summer, one of the appeals of being in Telluride is riding a mountain bike before or after work, or going for a hike or a trail run. During the ski season, I try to figure out how to get a little bit of skiing in if it’s a powder day.

There’s definitely some flexibility with my work schedule — that’s something we believe in as a company. Wilson on the Sneffels Highline Trail near Telluride.

In Telluride, most people have a story similar to mine: They came here and didn’t plan to stay, but then they fell in love with it. So I think in a lot of ways, it’s a new version of the classic mountain-town story.

That said, I had friends who moved from New York and didn’t feel comfortable being remote workers, and they moved back after about a year. Not everyone felt like they could totally integrate.

Like many mountain towns, Telluride is going through major changes.

With the rise of remote work, you have more people looking for monthlong Airbnb rentals; you have more second-home owners wanting to spend a lot of time here; you have people working remotely wanting to come to these towns — that has caused a housing crunch. And in these places, there was already a crunch on housing.

With the real-estate boom, a lot of houses that had been long-term rentals turned into second homes or short-term rentals, and people lost their housing. It’s definitely a stress point for folks. It’s important for anyone thinking about this type of move to be aware of that.

I was coming in as a new member of the community. I needed to be humble and learn and respect the traditions of the town and the way that people operate. I also needed to find ways to get involved, give back, and be conscious of this difficult period of change that the town’s going through. There are definite tradeoffs — but the slopes are worth it.

The cost of living is expensive. Housing is hard to find. Personally, I miss being near my family on the East Coast and being able to pop out and have dinner with my parents.

I miss going into the office, but I go into Alt Space, a coworking space in Telluride, almost every day. It’s great to meet people here and hear what they’re doing.

I was cautiously optimistic that in a small town there would be a strong community. But that’s been 100% true.

I would love to stay. I’m putting down roots with that intention. But like a lot of folks here, I think about it season to season — finding a rental and making sure that everything is functioning in terms of work.

Have you moved during the pandemic? Do you have a story to share? Let us know! Fill out this brief survey and an Insider reporter will get back to you.