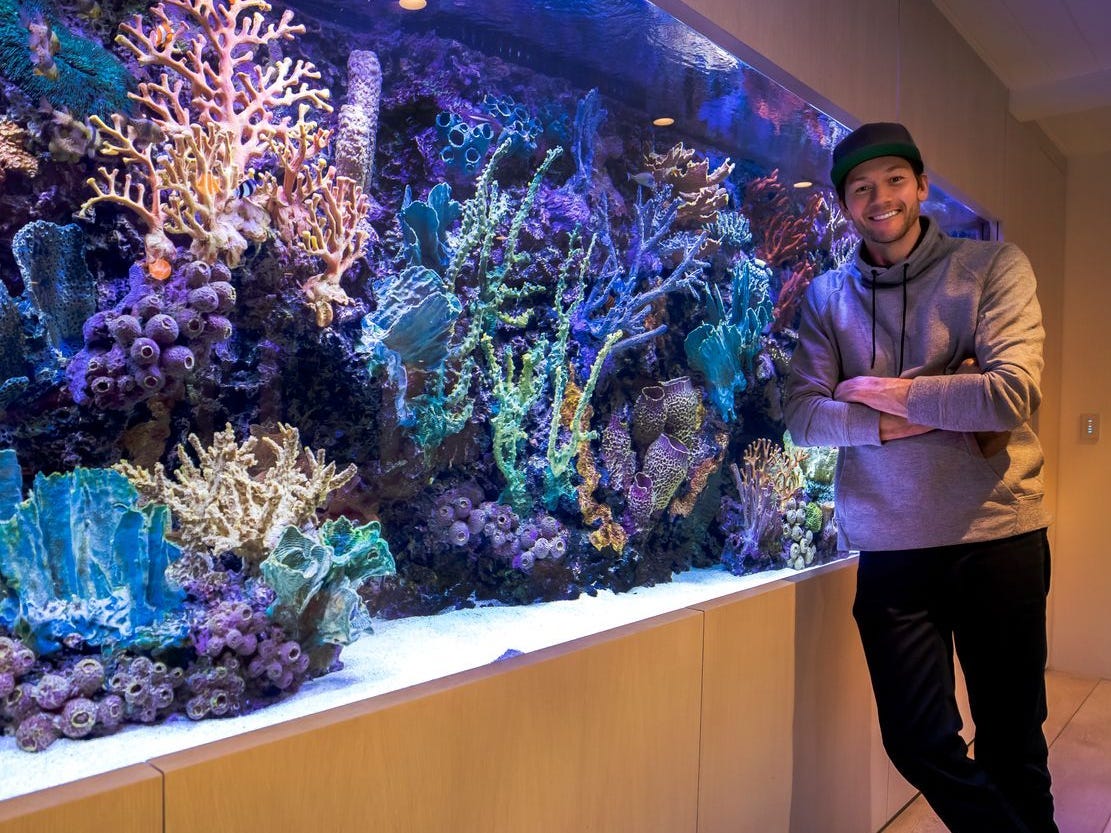 This as-told-to essay is based on a conversation with Nic Tiemens, a 42-year-old aquarium designer in Los Angeles, about his business. It’s been edited for length and clarity.

I grew up in Chicago in the 1990s. After graduating from high school, I wasn’t sure what I wanted to do in life but wanted to be creative. I was going to college and looking through the classified ads. I was 21 at the time and needed a summer job.

We’re going back before the internet and LinkedIn. To find a job, you had to buy the paper. I saw a $6-an-hour job to become an aquarium maintenance technician. I thought, “That’s a really cool job.” I had an aquarium growing up, and I love fish.

I didn’t have the prerequisites they required — professional experience and a résumé that showed you’d worked in a pet store — but I was certain I would love the job. I just had this intuition that I would love it.

So I showed up to the office unannounced and begged my way into getting hired. The first job I was put on as a trainee was an aquarium installation in Michael Jordan’s house.

I got to go into the house and meet Michael and his family. After I finished my training, I got put on that account as the head maintenance technician. Every Monday morning, I would go to Michael Jordan’s house and clean his fish tank.

That summer was life-changing because I got to meet so many captains of industry and icons in Chicago, and I fell in love with the idea of building and maintaining aquariums on a really elaborate scale. One of Tiemens’ elaborate tanks ready to be installed.

I decided to move to Hollywood because I thought with all the movie stars and mansions there would be a market for statement aquariums. Two years through my college degree in Chicago, I packed my bags and moved to Los Angeles with this ambition.

I was young and broke, so I found a local company that needed an extra maintenance technician and started working. I quickly realized the aquariums I had been working on back in Chicago were much more advanced than what I was seeing in Los Angeles.

I thought, “Well, I could do my own thing out here and do it so much better than all of these other companies.” So I called my former boss in Chicago and begged him to come out here and partner with me.

He did, and we started our company in 2004. We’ve done aquariums of all shapes and sizes and all price ranges.

In the past five years, we’ve found our niche doing these aquariums that are six figures and up and are on a scale that you would typically see in a public aquarium.

We’re working on a 2,600-gallon saltwater aquarium in Bel Air

One project consists of a 2,600-gallon saltwater aquarium for a spec home in the neighborhood of Bel Air. A spec home is move-in ready with all the amenities sorted. Developers working on $50 million to $100 million megamansions add wild amenities like bowling alleys, indoor-outdoor swimming pools, or even an over-the-top aquarium, like ours.

We often have to put the aquarium in before the house is completed; otherwise, we couldn’t get it in the property. For the Bel Air aquarium, we had to use a crane to lift it into the house from the street. Tiemens and his business partner overseeing an aquarium being lifted into a property.

We build the aquariums in our workshop and then install them into the houses. Once an aquarium is filled, we introduce bacteria to the tank so it will have a biological bed for the incoming fish. The process can take six to eight weeks.

Then we can start to add our show fish, which are owned by us and then bought by the clients. We maintain the tank once it’s installed, for a fee.

When we started the business, we were maintaining about 20 or 30 aquariums between my business partner and I. In the first five years, we were doing about $200,000 in revenue a year.

In the past five years, we’ve made sure we take on only jobs that we know will give us the opportunity to build the best aquarium possible. We turned down jobs that wouldn’t allow us to do the necessary things to really make the aquarium thrive because we’re just not interested in it.

We’ve gone from doing maybe two or three installations a year to 11 bookings already in place for 2022. Our least expensive aquarium is $75,000. Our most expensive is about a quarter of a million. We made just short of $1 million last year.

We are very careful about not becoming too busy, because we don’t want to spread ourselves too thin.

Obviously, our clients who are spending hundreds of thousands of dollars with us are expecting the most high-quality product and perfect customer service. This is the right size for our business right now.