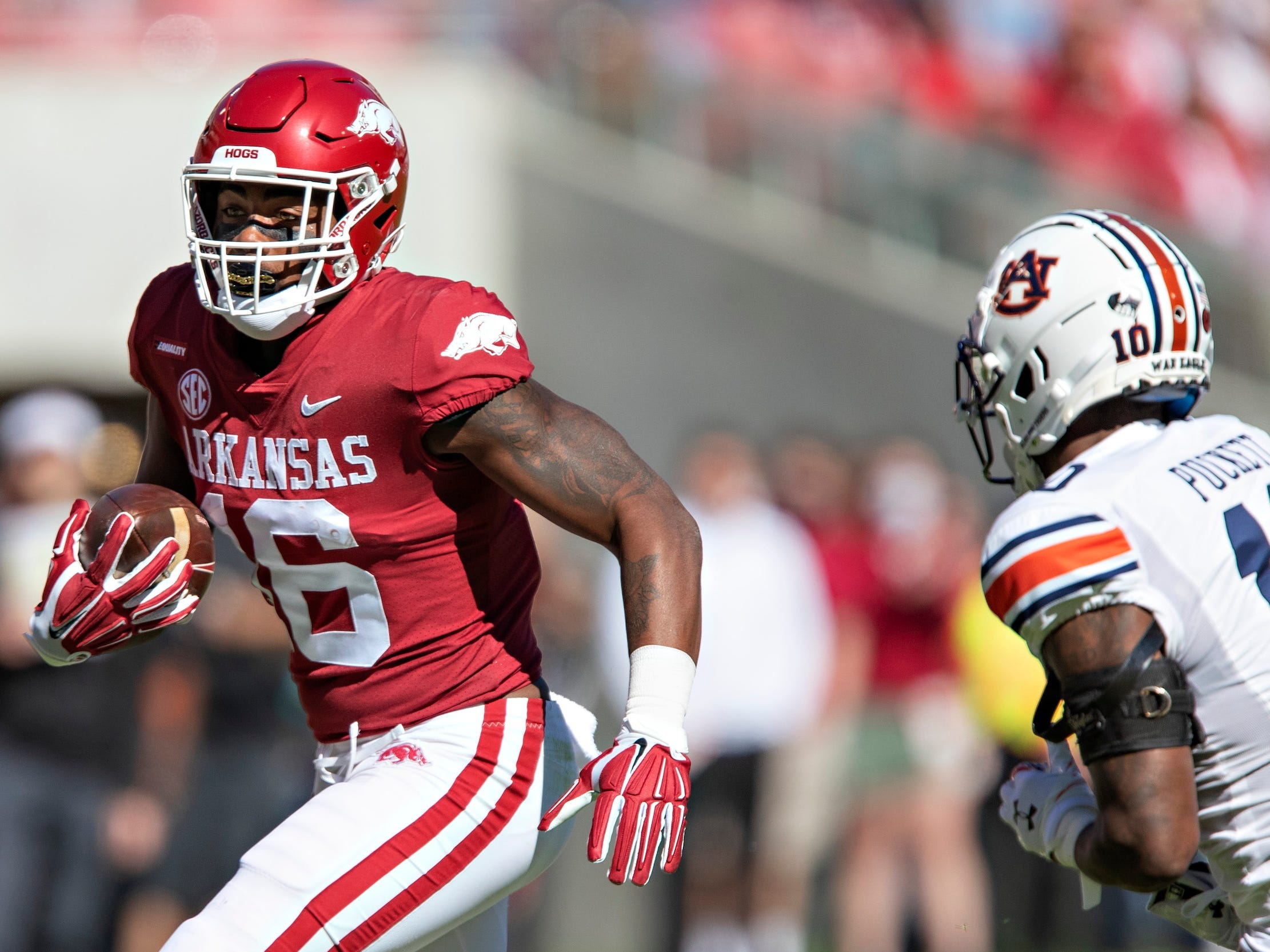 Wide receiver Treylon Burks of the Arkansas Razorbacks runs the ball during a game against the Auburn Tigers on October 16, 2021.

On July 1, after a decades-long fight, student-athletes across the country gained the right to make money from their names, images, and likenesses (NIL) thanks to a flurry of new state laws and an NCAA policy change.

What happened next was a mad rush of student-athletes, small businesses, national brands, and startups looking to cash in.

Some athletes in widely followed sports scored deals worth five or six figures. But many of the 460,000-plus student-athletes across the US ended up working with local businesses, like restaurants, or participating in one-off marketing campaigns with bigger brands, receiving free products, gift cards, or smaller cash payments, rather than big pay days, for their NIL promotions. University of Nebraska football players pose with burritos in a brand partnership with local restaurant Muchachos.

In addition to brand deals, student-athletes have run branded training clinics and have gotten paid for appearances and autograph signings.

“You don’t have to have 40,000 followers or even 10,000, 5,000 followers to take advantage of these [NIL] rules,” Christopher Aumueller, the CEO of the athlete-marketing and brand development upstart FanWord, told Insider. “Those small deals, while they may be small in monetary value, they may go a very long ways for these student-athletes. A couple hundred dollars here and there can make a big impact for some of these young men and women.”

One company that leaned into nano-influencer marketing for its first student-athlete campaign was The Vitamin Shoppe, which hired 14 college players for a campaign.

The company worked with sports-marketing company OpenSponsorship to identify 14 student-athletes across a wide range of sports, from golf and cross country to volleyball and cheerleading. All of the athletes had under 10,000 Instagram followers.

Each athlete was given about $100 worth of free products, including a set of whey and plant protein, a True Athlete performance supplement, and a shake bottle, in exchange for promoting the brand on social media.

“The micro-influencer trend has become popular because when you get people with smaller followings, with smaller networks, the things that they promote or suggest come off as more genuine,” Dustin Elliott, a senior brand manager at The Vitamin Shoppe, told Insider.

In a few states, even high school athletes are starting to get in on the NIL action.

Jaden Rashada, a quarterback for Pittsburg High School in Pittsburg, California, signed a sponsorship deal with the recruiting app AIR in December.

“Who better to talk about recruiting from a marketing perspective than someone that has just gone through it or someone that is actively going through it currently,” AIR’s founder James Sackville told Insider. How much student-athletes are earning from NIL

While many schools are being tight-lipped about how much their student-athletes are earning from NIL activities, in November, the University of Arkansas released data on how much its student-athletes had earned since July 1.

It reported that 140 of its student-athletes had participated in some type of NIL activity, working with over 170 companies on at least 300 agreements and earning an average of $4,102. Football, basketball, softball, and baseball players saw the highest volume of NIL deals at Arkansas, according to the university.

Those earnings could increase next year, as some brands are already making spending bets on the category for 2022.

Over half of the 300 brand, agency, and retail professionals surveyed by retail analytics firm Inmar Intelligence in November said they planned to spend between $50,000 and $500,000 on student-athletes next year. Only 15% of respondents said they either don’t plan to invest in the category or weren’t sure yet what their budget would be.

Read a breakdown of responses from Inmar’s survey, including how marketers think student-athletes will perform in ad campaigns compared to traditional influencers

Although some marketers are bullish to run student-athlete campaigns in 2022, the category comes with logistical challenges.

Colleges, student-athletes, and brands are still trying to figure out how to navigate a web of state laws and university guidelines around what players are and aren’t allowed to do with their names, images, and likenesses.

Some colleges and universities have developed policies to stop student-athletes from making brand deals that would interfere with their own lucrative sponsorship contracts.

“It is messy,” Blake Lawrence, CEO of sports-marketing platform Opendorse, told Insider in August. “If a student athlete at an Adidas school that signs a deal with, let’s say, Lululemon shows up to a press conference with a Lululemon hat and shirt on, is that a violation of the team’s contract with Adidas? Those are the things that people are trying to figure out.”

Other universities have pushed back against Barstool Sports’ student-athlete ambassador program, telling Insider the company did not have approval to use their trademarks and logos.

Read more about how colleges are taking steps to limit the deals student-athletes make with brands, as they look to protect their own sponsorships

As with any new industry that has a variety of regulations, a wave of startups and established companies have rushed in to help universities, student-athletes, and brands both succeed in the field and avoid missteps.

Some companies, like Athliance, are focused on helping universities and players handle NIL education and compliance. Others, like MOGL, are interested in building marketplaces to connect brands with student-athletes.

“People keep saying it’s the wild west,” said Chase Garrett, CEO of the athlete-marketing platform Icon Source. “But I think 2022 is gonna be the year of adoption. People have built-in marketing budgets. They’ve started to find the athletes that they think they would wanna work with. They’ve started to learn what’s market value.”