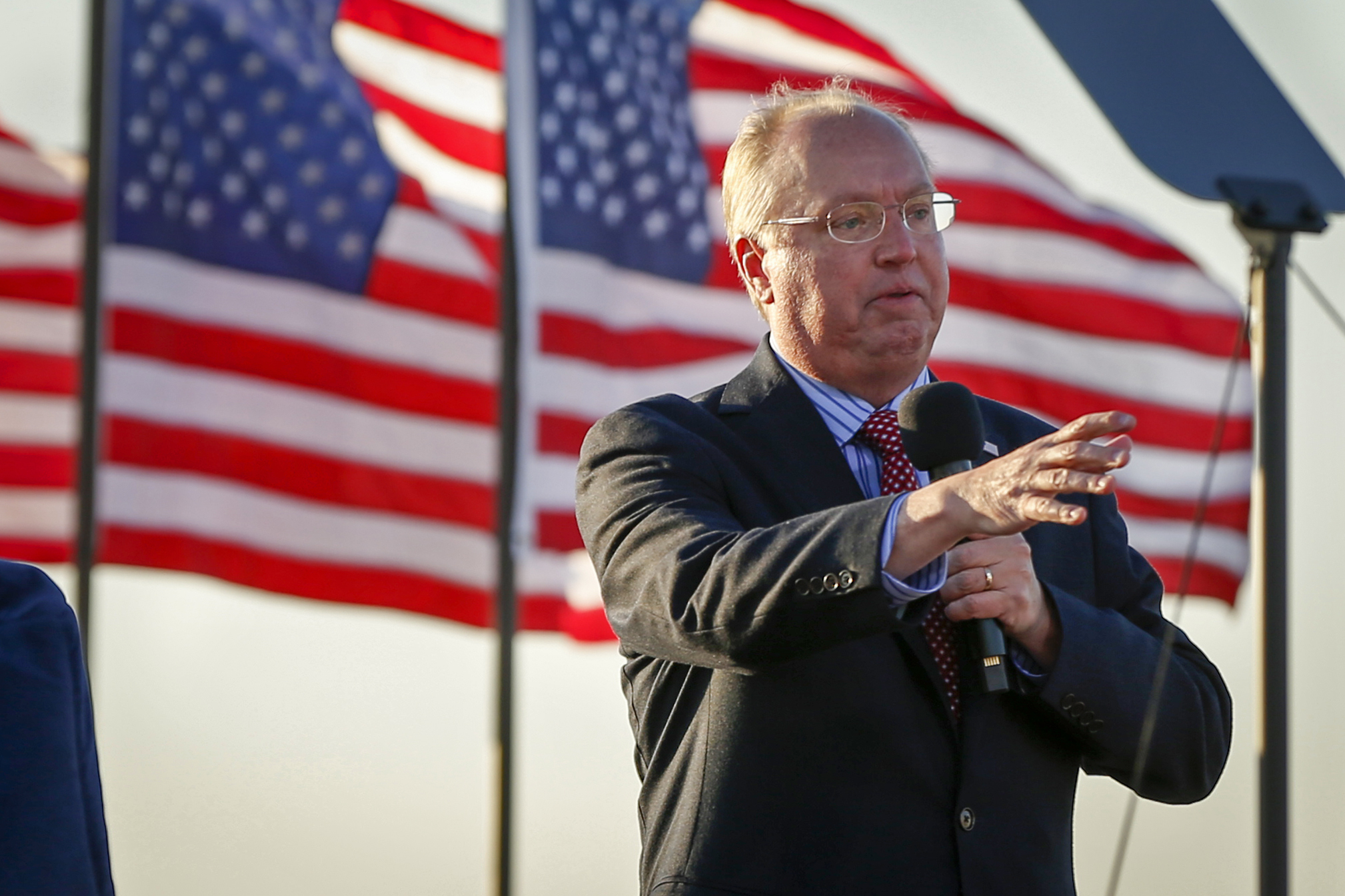 The late GOP Rep. Jim Hagedorn’s widow is laying the groundwork to try to seek his old seat in Minnesota, according to multiple well-placed Republicans who are already raising alarms about her polarizing background.

Republicans are preparing for Jennifer Carnahan to launch her campaign for Minnesota’s 1st District as early as Friday, entering a special election already shaping up to be crowded and competitive with a vow to carry on her late husband’s legacy. Carnahan would bring more than ties to Hagedorn, who died last month after battling kidney cancer since 2019 — she’s a former state GOP chair.

But Carnahan resigned the Minnesota Republican chair position last summer amid a scandal that began when a donor got charged with multiple counts of sex trafficking. She’s starting her Hill outreach early: House Minority Leader Kevin McCarthy confirmed to POLITICO that he and Carnahan spoke by phone this week, a day after Hagedorn’s Tuesday memorial service in Virginia.

Whether that effort gets her past the GOP’s privately held anxiety over her checkered record is another matter.

“I think she has a lot of unresolved political baggage that will put the congressional district in play for the Democrats,” said Michael Brodkorb, a former deputy chair of the Minnesota GOP who also spoke out after her resignation. He added that a Carnahan bid “will also bring an unnecessary level of drama and resurface some unresolved issues” that the party would otherwise like to leave in the past.

When asked whether Carnahan expressed her intent to run for her late husband’s seat during their call, McCarthy didn’t answer yes or no. She also spoke Wednesday to Pennsylvania Rep. GT Thompson, the top Republican on the House Agriculture Committee; Hagedorn previously served on the panel, an assignment critical to his district. Thompson said Carnahan did not mention plans to run for the seat. He’s already endorsed Brad Finstad, another Republican in the race with an agriculture-heavy resume.

Asked for comment on her potential plans to run, as well as closed-door GOP anxiety over her bid, Carnahan also didn’t confirm a bid — but did push back at her critics.

“Strong leaders frequently end up with enemies. You could pick almost any Member out of the Congressional register and come up with similar attacks,” Carnahan wrote to POLITICO. “I suggest you look at the history of Michael Brodkorb and his credibility as an accuser. I made and maintain many great friendship[s] from my service in the Republican Party of Minnesota.”

She did not respond when pressed for specifics about her claims of Brodkorb’s past. Carnahan also pointed to laudatory remarks that South Dakota Gov. Kristi Noem offered for a Minnesota GOP dinner in March 2021.

“What I love about Jennifer is, she’s not a poser. She’s not a fake,” Noem said in a video recorded for the event. “She is leading your state with grace, dignity and a lot of grit in her belly.”

Asked for comment on her previous remarks about Carnahan, made before the Lazzaro scandal, Noem said in a statement: “I’ll let the people of her district decide if she is qualified to serve them.” Noem is not expected to endorse any candidates in the race.

For Republicans on Capitol Hill, at least, Carnahan’s prospective candidacy would cause a number of headaches. Behind closed doors, Hagedorn’s friends in the House GOP worry she is trying to capitalize on his legacy to leapfrog into the seat after facing serious allegations last year that she presided over a toxic work environment at the state party.

Carnahan resigned as state party chair as the scandal over GOP operative Anton Lazzaro’s ten charges of child sex-trafficking engulfed the party. Lazzaro was a major GOP donor whom Carnahan had known since 2016 — the two even co-hosted a podcast together.

As the clamor for her resignation built over her ties to Lazzaro, Carnahan argued that they had a “political friendship” and she didn’t know his personal background. Pushing back against the claims, she argued that “guilt by association is just wrong.”

“I didn’t have any direct knowledge, nor was I involved in any way with the alleged criminal activities,” she told local radio show hosts in August. “I found out when you guys found out. And just as everybody else, I was very shocked. I was quite honestly disgusted.”

A few Minnesota Republicans defended her, suggesting she may have become a scapegoat for a matter that didn’t involve her. But Carnahan ultimately stepped down from the Minnesota GOP a few days after that radio interview aired; top party officials later approved $38,000 in severance pay for her. Carnahan was the deciding vote to both leave office and approve the funds.

Her lawyer told POLITICO afterward that they were looking at filing defamation suits based on claims against her that they said are false. It is unclear whether any of those suits came to fruition.

Perhaps as problematic as her resignation, for Hagedorn’s Hill allies, is her past treatment of her husband’s illness. A recording made public in August of last year captured Carnahan as saying, “Jim is going to die of cancer in two years” and later saying in the same recording that “none of this matters because Jim will be dead in two years.” Carnahan told a local radio host following those comments that they were made “in grief,” after she had been drinking at an event after a long day, and said she “obviously” apologized to Hagedorn about the “absolutely regrettable” choice of words.

POLITICO also has reviewed social media posts from August in which Carnahan appears to be criticizing her husband. Comments on a Facebook post of Hagedorn celebrating his birthday, which appear under her name, first state: “Glad you posted spending your birthday with your wife, who drove 3 hours out of her way to show you love and kindness guess it’s clear how much that meant to you.”

Thirty minutes after that post, another comment under Carnahan’s name appears, stating: “I bought you dinner and wine at Chankaska. There is not a single post about it, but the post about your birthday is of your employees? It’s degrading, condescending and upsetting to me on many levels.”

One House Republican involved in the National Republican Congressional Committee, addressing Carnahan’s problems on condition of anonymity, said, “I guarantee Jim’s friends are going to end up endorsing someone else.” This GOP lawmaker added that colleagues are waiting to see if Carnahan tries to run on Hagedorn’s name or campaigns with her own on the ballot. “Just Carnahan? Is it Jennifer Carnahan-Hagedorn? Or is it just completely Jennifer Hagedorn?”

Whether or not she gets in the race, Carnahan would face a fight to claim Hagedorn’s seat. Already, six other Republicans have filed to run, and while former President Donald Trump won the district by more than 10 points in 2020, it is a battleground that a Democrat — specifically now-Gov. Tim Walz — held as recently as 2018.

The seat was closely contested in the last two elections. Already some strong Democratic candidates are throwing their names in the mix, like Jeffrey Ettinger, who served as the CEO of Hormel Foods Corp for more than a decade. (Dan Feehan, Democrats’ nominee in 2018 and 2020, has said he doesn’t plan to run again.) With redistricting, the seat is not expected to change in a meaningful way.

Ally Mutnick contributed to this report.