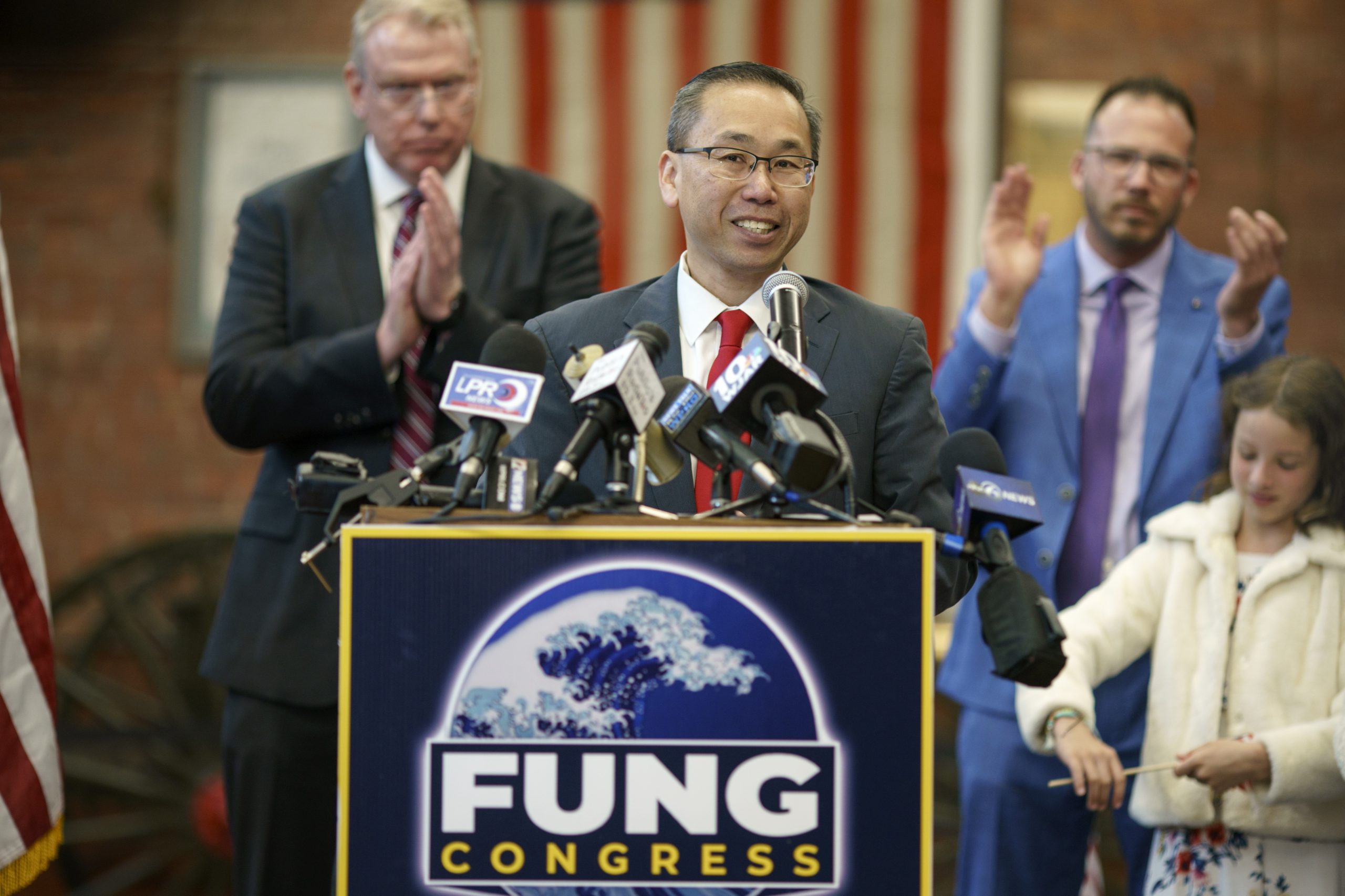 Rep. Kim Schrier called it an “honor” to welcome President Joe Biden to suburban Seattle for a health care speech in April. Then, nearly three months later, the Washington Democrat used a TV ad to boast about “taking on” the Biden administration over gas prices.

This kind of pivot in a House battleground — which Biden won by 7 points just two years ago — isn’t an anomaly. Recent GOP polling in roughly a dozen swing districts offers a bleak portrait of how President Joe Biden’s anemic approval ratings are threatening to doom battle-tested swing-seat incumbents — and nudge once-safe districts into the middle of the danger zone.

“I literally laughed out loud,” Army veteran Jesse Jensen, one of Schrier’s GOP opponents, said of the first time he saw the ad. “She is claiming — because she finally looked at some polling and realized that he’s unpopular — that she’s this independent-minded free spirit that is fighting the administration. And she’s been a rubber stamp for him every single step of the way.”

With just four months until the midterms, Democrats were already on the defensive in at least 30 highly competitive districts. But Biden’s toxicity has given the GOP optimism about seriously contesting a fresh crop of about a dozen seats that the president won in 2020 by 9 points or more — from western Rhode Island to California’s Central Valley to the suburbs of Arizona’s capital.

The result is a House map that has expanded to an uncomfortable place for Democrats. Survey data obtained by POLITICO shows the president underwater by double-digit margins in 11 districts he carried.

One stark example: his approval rating was upside down by 32 points in a June poll of Rep. Susan Wild’s (D-Pa.) seat from the National Republican Congressional Committee.

“Obviously, as you know, the top of the ticket affects congressional races so it’s not something I’m not aware of,” said Rep. Susie Lee (D-Nev.). The president’s disapproval rating is 20 points higher than his approval number in her Southern Nevada district, according to polling from her Republican opponent and the House GOP campaign arm. Two years ago, Biden carried it by 7 points.

“They are obviously looking to the leader to put some blame on him,” she added, refraining from dishing out her own criticism. “But they need to be reminded that we’ve been working hard, trying to attack the problem.”

Democrats insist Biden numbers alone won’t seal the fates of their candidates, some of whom have built up their own identities. Still, as they privately grimace at the polling, many hope the bad news has bottomed out. They insist they can recover ground, particularly in the suburbs, as voters recoil at the reversal of Roe v. Wade. Nearly all of the district-level surveys available were conducted before the Supreme Court’s abortion ruling — though its unclear how or if it will change Biden’s popularity.

“Prior to the devastating Dobbs decision, Frontline Democrats consistently performed ahead of the generic ballot, and they remain untethered from President Biden’s approval rating,” Tim Persico, the executive director of House Democrats’ campaign arm, said in a statement.

Voters recognize that Democrats are fighting to defend abortion access, help boost the economy and are “focused on the needs of their districts,” he said.

If more goes in their favor, such as gas prices continuing to tick down or Democrats passing popular bills this summer, they could hang onto more seats. But many admit the GOP’s lead — given Biden’s unpopularity, and strong Republican recruits and fundraising — is likely insurmountable.

“Even in deep blue Rhode Island, people don’t want him to run again,” said GOP candidate Allan Fung, a former mayor running for an open district in western Rhode Island — a reach seat now coming into play for Republicans. He said a recent Suffolk University poll sent “shockwaves” through the state when it found Biden’s approval rating cratering to 39 percent. “I think there’s a lot of buyer’s remorse in President Biden.”

That kind of polling — which has come from both parties — gives Republicans optimism that they will be able to contest a slew of traditionally Democratic seats. For example, Biden is down 15 points in a pro-Democrat group’s polling of a now-open Oregon seat he won by 9 points in 2020; down 16 points in GOP polling of Rep. Annie Kuster’s (D-N.H.), which he won by 9 points; and down 17 points in a recent Republican survey of Rep. Angie Craig’s (D-Minn.) seat, which he carried by 7 points four years ago. All three surveys were conducted in June.

The atmosphere has become so abysmal for Democrats that strategists see the potential for a slew of bluer districts to come into play, including ones Biden carried by double-digits two years ago. That includes seats held by Rep. Greg Stanton (D-Ariz.), Jahana Hayes (D-Conn.); the seats left open by Reps. Josh Harder (D-Calif.) and Sean Patrick Maloney (D-N.Y.), who jumped districts; and the seats represented by Reps. Ed Perlmutter (D-Colo.) and Jim Langevin (D-R.I.), who are retiring.

For instance, Biden is upside down by 19 points in a June GOP poll of Democratic Rep. Frank Mrvan’s northwest Indiana district, which backed the president by 9 points in 2020.

“Just the fact that we’re able to play and seriously compete for districts that Biden won by nearly 10 points says just how much of an anchor he is,” said Dan Conston, president of the Congressional Leadership Fund, a major Republican super PAC which commissioned the poll of Mrvan’s seat. “We haven’t had a single district survey where Biden is right side up.”

Democrats have shared little of their own polling, but there are ample signs they see Biden’s toxicity as well. Several incumbents have already gone on TV in June and July — long before the typical end-of-summer onslaught of ads — to stress their bipartisan credentials. For example, Reps. Dan Kildee and Elissa Slotkin, two Democrats in competitive seats under Michigan’s new congressional map, are on air touting their work with Republicans and Democrats.

Many battleground Democrats are split over how to handle an environment so hostile to their own president. Some have begun to openly condemn Biden on everything from gas prices to abortion, while others are careful not to finger-point.

“I’ve been riding with Biden from the beginning. And so I can’t deny that and I don’t want to deny it, but we’re running our own race and talking about what I’ve done in the district,” said Rep. Dina Titus (D-Nev.), “I’m not looking at that as a major factor.” (GOP polling from the spring found Biden 14 points underwater in her Las Vegas-based seat.)

While Democrats say they are clear-eyed about Biden’s standing, they argue it’s not just the president who’s on the ballot in November. There’s also abortion.

It’s unclear whether Democrats will see a sustained polling bump from the ruling. But if it can energize the party’s base voters and keep them motivated to turn out, that could complicate GOP plans to contest highly educated districts that could be decided by a few hundred votes, such as Rep. Katie Porter’s (D-Calif.) or Mike Levin’s (D-Calif.). Biden won both by double digits.

Party strategists say they expect the loss of abortion rights will have the most effect in states without guaranteed access, such as Michigan, Virginia or Arizona, where voters will see a clear threat if more Republicans win power.

“Abortion or choice wasn’t frequently an issue that voters and people on the campaign trail would ask me about,” said Rep. Abigail Spanberger (D-Va.), who’s defending a swing seat in central Virginia. Now, she said: “There’s deep concern about what this actually means.”

For veteran strategists, this year’s cycle is drawing comparisons to the GOP wave in 2010, when the party also worked to land strong candidates who could contest tough districts.

This cycle’s recruits this year include Fung, who twice ran for governor in Rhode Island; Alek Skarlatos, a veteran who once thwarted a terrorist attack on a train; and John Duarte, a nursery owner, farmer and businessperson.

They are particularly excited about Duarte’s prospects in a Central Valley, California district that is heavily Hispanic and rural. Republicans make up just 28 percent of registered voters in the district but GOP candidates got more than 50 percent of the vote in the all-party primary in June. Biden carried the district by 11 points in 2020, but Duarte’s polling from mid-May found the president underwater by 13 points.

Duarte said his employees and neighbors now have to choose between food and gas — and that they blame Biden and the Democratic-controlled Congress.

“Costs of living are so high and the job opportunities are becoming more and more scarce,” Duarte said. “And these are some of the hardest working people in America, working in agriculture in the Central Valley.”