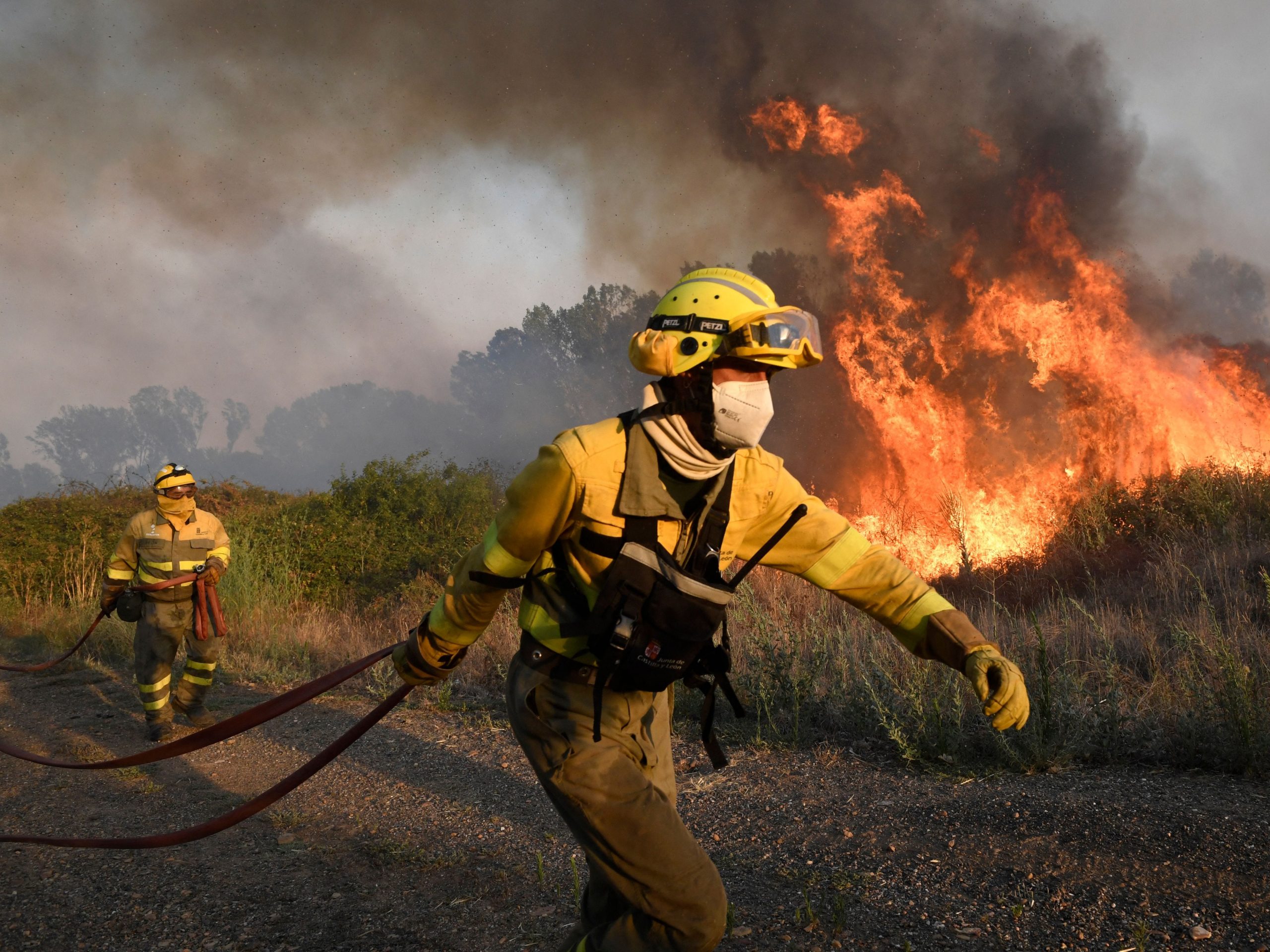 Firefighters try to extinguish a wildfire next to the village of Tabara, near Zamora, northern Spain, on Monday.

President Joe Biden is running out of options to combat the climate crisis after a major legislative package with more than $300 billion in clean energy tax breaks and other spending stalled on Capitol Hill last week.

The setback has amped up the pressure from climate activists and Senate Democrats to declare a national climate emergency, which would allow Biden to tap new pots of federal money to build large renewable energy projects in places like military bases and to buy more electric vehicles for the government fleet.

It also could empower Biden to reinstate a ban on crude oil exports and provide some legal cover to stop offshore oil and gas drilling, but those moves are unlikely as the White House tries to slow inflation and high prices at the pump by encouraging more oil production.

Sens. Jeff Merkley (D-Ore.), Bernie Sanders (I-VT), and seven other colleagues sent a letter to Biden on Wednesday urging him to invoke his powers under the National Emergency Act and pursue actions to slash greenhouse gas emissions and protect public health.

“For too long, we have been waiting for a single piece of legislation, and a single Senate vote, to take bold action on our climate crisis,” the senators wrote. “While we will continue to fight for whatever climate and clean energy proposals can pass in a divided Senate, Congressional action to address the climate crisis appears to have stalled.”

Sen. Joe Manchin (D-WV) last week upended hopes that Congress would pass more than $300 billion in clean energy tax breaks and other climate spending before November’s midterm elections. His vote was critical in an evenly divided Senate, where Democrats are trying to push through Biden’s economic agenda by using a budget maneuver that would bypass a Republican filibuster.

The blow followed the Supreme Court’s decision earlier this month limiting the Environmental Protection Agency’s authority to limit greenhouse gas emissions from power plants. The agency is expected to draft narrower rules, but without new legislation, it’s all but guaranteed the US won’t slash planet-warming pollution in half this decade — a promise it made under the Paris Climate Agreement.

Current policies put the US on track to reduce emissions by between 24 and 25% by 2030, according to an analysis by the Rhodium Group.

Global leaders are trying to limit global warming to 1.5 degrees Celsius above pre-industrial levels to avoid the most catastrophic effects of climate change, which scientists estimate requires the wealthiest countries to slash emissions in half this decade.

The world has already warmed about 1.2 degrees Celsius, which is fueling deadly heat waves in Western Europe, the worst drought in 40 years in the Horn of Africa that has displaced hundreds of thousands of people, and exacerbated a hunger crisis, as well as more extreme wildfires from the US to France and Spain to Australia.

“The fact that Biden is contemplating declaring a climate emergency is remarkable,” said Jean Su, director of the energy justice program and a senior attorney at the Center for Biological Diversity. “He’s had a spotty record on climate.”

Su, who co-authored a legal guide on the president’s emergency climate powers, noted that the Biden administration in July opened the door to the largest lease sales for offshore oil drilling in history in the Gulf of Mexico. The five-year plan also blocked new drilling in the Atlantic and Pacific Oceans within US waters.

Biden also made a campaign promise to suspend new federal drilling on public lands, but that policy promoted lawsuits from red-state governors and the oil industry. And in April, the president announced the US would resume leases on federal lands to help stem rising oil and natural gas prices.

“The emergency powers give wide discretion to the president so actions are more legally defensible,” Su said. “But executive action isn’t a silver bullet. We still have to push for climate legislation.”

About 20% of US power is generated by clean energy like solar and wind, according to the Energy Information Agency, while electric vehicles still make up fewer than 3% of new car sales. The power and transportation sectors combined account for more than half of the nation’s emissions.