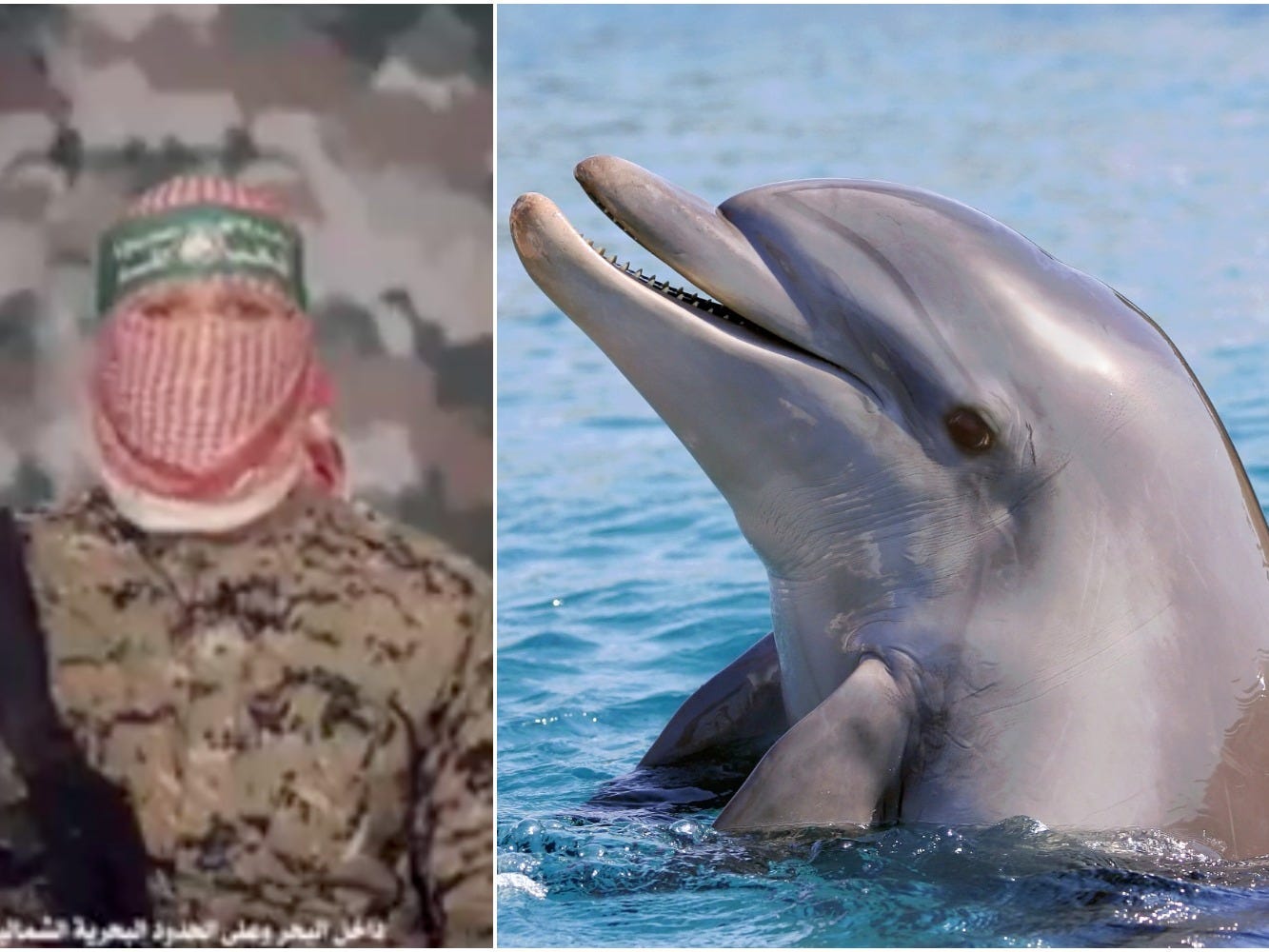 A Hamas spokesperson released a video saying the militant group had discovered an Israeli killer dolphin.

A spokesman for the Palestinian Al-Qassam Brigades, the military wing of Hamas, claimed in a video on Monday that the militant group had discovered an Israeli assassin dolphin off the coast of the Gaza Strip.

The spokesperson alleged that Israel’s military had trained the dolphin to chase and kill Hamas’s frogmen, per the Palestinian newspaper Al-Quds.

The spokesman said that one Hamas fighter, Israel killed during the conflict in May, found a gun-like device attached to the aquatic mammal, The Jerusalem Post reported. He did not specify when the operation took place. Hamas claims to have found a gun-like device on the beak of a dolphin.

Experts told Insider that while dolphins can and have been used for military exercises, this most recent claim of a sea-faring assassin should be viewed with skepticism.

“Hamas has definitely put out a lot of propaganda and, if you like, not entirely honest media in the past,” said HI Sutton, a defense analyst who writes for the US Naval Institute during an interview with Insider. “So there’s always a chance that it’s made up.”

‘There’s a propaganda war going on’

Gervase Philips, a lecturer at Manchester Metropolitan University, whose research focuses on animals in human conflict, told Insider he agrees.

“My own position is that, theoretically, this is possible, but I am very, very skeptical,” he told Insider. “There’s a propaganda war going on,” Phillips said, agreeing with the notion that Hamas’s claim should be questioned.

This isn’t the first time that Hamas has accused Israel of using dolphins to target them, offering scant evidence to back the claims.

In 2015, it claimed to have captured a dolphin being used as an Israeli spy. Per Al-Quds, it was reportedly equipped with a spy camera and turned into a “murderer” by Israeli security forces. No photographic evidence of the alleged marine secret agent was ever released, according to BBC News.

Other Arab nations have also accused Israel of using animals to target enemies. Hezbollah in Lebanon claimed to have captured Israeli spying eagles. In 2012, Sudan accused Israel of sending a vulture capable of espionage into the country.

And in 2010, an Egyptian lawmaker proliferated a claim that Mossad was responsible for several shark attacks that occurred off the coast of the Sharm el-Sheikh resort.

But while animal-related conspiracy theories about Israel might sound fantastical, it is a fact that some nations have used marine mammals in warfare.

The US Navy has a marine mammal program

The US and Russian militaries have, historically, trained sea creatures. Little is known about the Soviet-era or modern Russian program, Phillips said, leading to “all kinds of rumors circulating,” but the existence of the US Navy Marine Mammal (NMMP) Program is well-publicized.

After the program became de-classified in the early 1990s, the public learned that the NMMP trains bottlenose dolphins and California sea lions to perform protection, mine detection, and object recovery. The US Navy insists that it has never trained marine mammals to attack people or ships because dolphins cannot discern between enemy and friendly vessels or divers.

Phillips added that it is “impractical” — and potentially “catastrophic” — to use dolphins in murder missions because they have minds of their own.

“Behavioral scientists have this tendency to talk of animals as programmable platforms as if they were machines or a form of AI,” he told Insider. “But they are not artificial — they are sentient creatures with a will of their own and there is always an element of the unpredictable about them.”

Sutton said that while the dolphins are unlikely to be doing the killing themselves, it is “not that far-fetched” to suggest that militaries could be using them to attach markers to targets with a view to them being captured or taken out by humans.

The gun-like device, which the Hamas spokesperson showed in the video, is more likely “a marker buoy,” said Sutton, but could also be “a pinger or an acoustic device.

HI Sutton’s model of the alleged gun-like device on a dolphin.

Israel has not publicly disclosed whether it has a marine mammal military program. The Israel Defense Forces did not respond to Insider’s request for comment on the existence of the program or the alleged discovery of a killer dolphin.