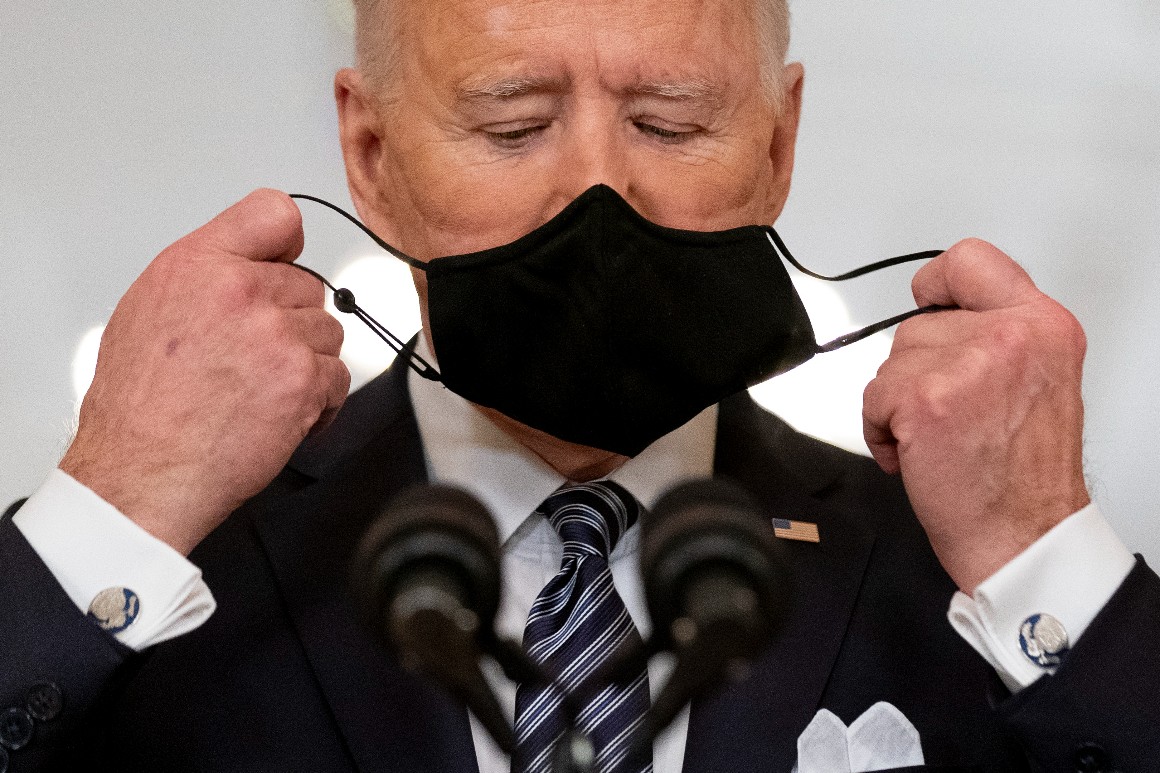 House Republicans are edging toward harder hits at President Joe Biden while he struggles to contain Covid’s Omicron variant. Just don’t expect it to become a centerpiece of their midterm-election messaging.

That’s in part because the GOP has to walk a fine line on the pandemic — thanks to Donald Trump.

After Biden and Democrats campaigned on a vow to help steer a virus-weary nation back to normalcy, arguing that the GOP failed to quickly respond when Covid first descended, Republicans now say Biden has proven himself unprepared to deal with the Omicron surge. It’s an argument that Republicans are eager to fling back at the White House after more than a year on the back foot, accusing Biden’s party of politically weaponizing Covid against them.

“President Biden’s learned a valuable lesson: Be careful who you criticize and what you criticize them for, because it may come back to you,” Rep. Rodney Davis (R-Ill.) said.

But going on offense against Biden isn’t the same as building an election-year message around his handling of Covid. And the GOP likely won’t do that for several reasons: Members say it wouldn’t resonate well with their base, compared with issues like the economy, education and national security. Republicans also see it as a tough point to underscore given their broad dismissal of Covid precautions after the nation’s first round of vaccinations, as well as their growing rebukes of mask and vaccine mandates.

Not to mention that the party is still trying to minimize Trump’s actions when the pandemic first shut down the country nearly two years ago. The former president downplayed the virus at first, repeatedly undermined his own infectious disease experts, suggested the use of unproven and dangerous treatments, and at times embraced suggestions his administration should let the virus run largely rampant through a still-unvaccinated country.

Trump later hid his own vaccination status and rebuffed pleas last year to promote Biden’s initial vaccine rollout. Only this month did he reveal that he is fully boosted against Covid and urge people to get vaccinated, while calling politicians who aren’t transparent about their status “gutless.” The remarks, however, were seen as a verbal jab at Florida Gov. Ron DeSantis, who has chafed Trump in recent months with his lack of deference related to the next presidential election.

That backstory makes Trump — the GOP’s national leader in the eyes of most House Republicans — a deeply inconvenient standard-bearer on Covid policy.

Still, in an effort to shield Trump from criticism over his handling of the pandemic, Republicans argue that he shouldn’t be compared with Biden, who inherited an entire infrastructure in place to deal with the virus. Biden’s failures to contain Covid could have been avoided more easily than Trump’s — and should have — been avoided, GOP lawmakers contend.

“And they’ve handled it in a very disorganized fashion, where now everyone is confused their promises have not been upheld,” he added.

Despite their members’ growing anti-lockdown and anti-mandate rhetoric, House Republicans say they can fold a cogent critique of Biden’s handling of Covid into a broader case that he has failed to deliver, alongside soaring inflation, the chaotic U.S. withdrawal from Afghanistan and a rise in illegal southern border crossings.

“We watched President Trump and Republicans get blamed for Covid … President Biden is seeing right now that his rhetoric is clearly not matching the actions, and he needs to face accountability,” Davis said.

House Minority Leader Kevin McCarthy’s office, meanwhile, has sent out messaging emails that hit Biden for failing to “live up to his own assurances” or deliver “a realistic response to the virus.”

But other Republicans took a more even-handed view. Rep. Don Bacon (R-Neb.) said it’s fair to criticize both Biden and Trump for fumbling the virus at various points, though he contended Democrats struck the first low blow by turning the virus into a 2020 election issue.

“It’s worth noting, they politicized it, and they have done worse,” added Bacon, who held onto his seat in 2020 as his district swung towards Biden. “But I think we would be better off if we didn’t politicize it to begin with.”

Still, most on Capitol Hill think neither party can afford to back off on partisan wrangling over the virus — especially with polls showing Biden at a weak point politically when it comes to Covid. And while Democrats maintain voters will ultimately blame GOP governors and the unvaccinated population for the prolonging the pandemic, exhaustion with the public health crisis could ultimately bolster Republicans’ case.

Some Democratic governors are hesitant to reimpose public health restrictions, like mask mandates, for fear of a backlash. The White House has repeatedly emphasized that it won’t return to lockdowns.

At the same time, Biden allies have grown frustrated about Democratic criticism of the White House’s stumbles on testing and isolation guidelines, believing those intraparty blows only strengthen GOP messaging.

Some Biden supporters have zeroed in on senators’ insistence on hauling in top public health officials for regular hearings, venting that it accomplishes little beyond giving Republicans a platform to amplify bad-faith criticism.

The sessions in front of the Senate’s health committee are often dominated by erroneous yet headline-grabbing attacks on Anthony Fauci, the government’s top infectious disease expert, by Sen. Rand Paul (R-Ky.) — attacks that, according to Biden allies, can force the administration to burn time tamping down misinformation and defending its own officials. That displeasure has been communicated to Democrats on the Senate panel, said one person with knowledge of the matter, though it’s unlikely to spur any changes to the committee’s practices.

Inside the administration, officials are eager to keep the focus on the public health response, betting that the best thing they — and the country overall — is to get more people vaccinated.

Yet politics is more than a distraction for the administration. Even as Democrats dismiss the GOP attacks as anti-science, major party players are calling for a more aggressive villainizing of Republicans over opposition to Biden’s policies that they see as responsible for prolonging the pandemic.

The GOP is “actively fighting known successful mitigation efforts all across the country,” said Brad Woodhouse, executive director of Democrat-aligned Protect Our Care. “It’s part of a political strategy.”

The intensifying Republican focus on Biden’s pandemic response comes amid a roaring resurgence of the virus that’s demoralized the nation and sent the administration scrambling for a reset.

For much of Biden’s first year, Democrats wagered that voters would reward the administration’s clear progress in fighting Covid — passing trillions of dollars in aid, rolling out a successful vaccination campaign and suppressing the virus without resorting to lockdowns. The rise of the Delta variant, followed by Omicron, has all but wiped out that hope.

Biden’s approval ratings are falling, and early White House efforts to project what aides referred to as “consistent competence” on Covid have been swamped by growing confusion over the administration’s plans to rein in an out-of-control virus.

“If you look at the whole world, everyone’s having the same problems,” Michael Osterholm, a University of Minnesota epidemiologist and former adviser to the Biden transition, said as Covid cases hit record levels. “This is the time when we just need to level with the public.”