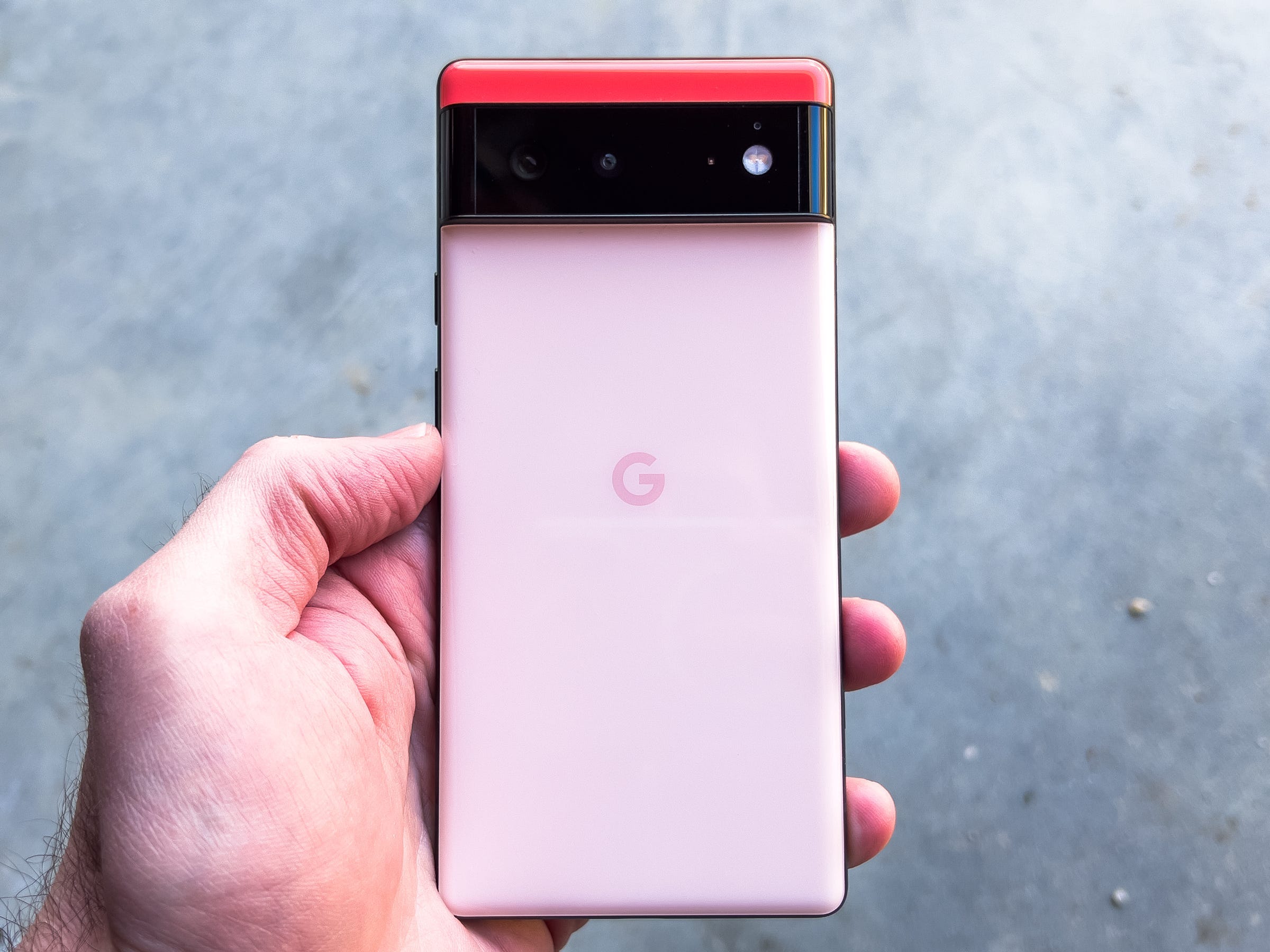 After a stint of Pixel phones that felt stale and uninspired, the Pixel 6 is a breath of fresh air.

With a bold design, updated camera hardware, and Google’s new Tensor processor, the Pixel 6 stands out among common Android phones. The advanced processor is especially useful for enabling new and upgraded features, like incredibly accurate voice recognition and a Magic Eraser option for photos.

The Pixel 6 isn’t perfect, but it delivers an excellent Android experience for $600, especially compared to $800-plus premium competitors. Read on for more specific details on the Pixel 6’s performance, battery life, screen, and camera. The standard Pixel 6 is the smallest of Google’s latest lineup, but it’s still huge — it’s nearly as large as the iPhone 13 Pro Max and the Samsung Galaxy S21 Plus. That’s great for fans of large phones, but not so much for those who prefer mid-sized models that can be more comfortable for one-handed use. I know someone personally who was hoping to upgrade to the Pixel 6, but its large size puts them off. Instead, the 1080p/90Hz display delivers a crisp and smooth experience, even on a screen as large as 6.4 inches. The 120Hz refresh rate on the more expensive Pixel 6 Pro and other high-end phones is somewhat smoother, but that benefit is hardly perceptible.

What is perceptible is the Pixel 6’s 90Hz refresh rate compared to the standard 60Hz refresh rate from a couple years ago. If you’re upgrading from an older phone with a 60Hz screen, the Pixel 6 will look buttery smooth, even if it doesn’t run at the full 120Hz that some other options offer. Android fans have been very curious to see how this new Pixel performs, as Google switched from traditional processors made by Qualcomm to its own processor called “Tensor.”

In real-life usage, Google’s Tensor processor is quick to open and run apps — things happen quickly on the Pixel 6 when you tap and navigate around. However, I got some jarring stuttery performance while scrolling on certain apps, namely Reddit and Twitter, but not Instagram, Amazon, or Chrome.

To compare, I didn’t experience stuttery scrolling on any apps on Samsung’s Galaxy S21 running on Qualcomm’s Snapdragon 888.

On paper with our usual Geekbench 5 benchmark tests, Google’s Tensor scored slightly lower than Qualcomm’s Snapdragon 888. The Tensor scored an average of 1,025 for single-core performance, and an average of 2,850 for multi-core, compared to the Galaxy S21’s 1,098 / 3,259 score. The difference is so negligible that it doesn’t explain the stuttery performance, which leads me to believe it’s something else that’s causing those stutters, but it’s not clear what.

Instead of striving for raw power, Google focused on optimizing Tensor for machine learning functions, like voice recognition and camera features

The phone’s voice recognition is stunningly effective. It’s incredibly accurate, and it can punctuate itself with me having to say “full stop” or “comma.” It’s so good and seamless that you might actually find voice dictation useful for a change.

As for camera features, machine learning on the Tensor processor allows for impressive options like Magic Eraser that lets you remove undesirable objects or people from your photos. This feature even works with pictures in Google Photos that you took with other phones. It’s not perfect, however, as Magic Eraser can leave obvious editing traces. Still, an odd-looking blurry spot can be better than a stranger or an unwanted object. A photo taken before using the Pixel 6’s Magic Eraser feature, where I wanted to remove the blue device on the couch. Magic Eraser on the Pixel 6 was able to remove the blue device, but you can still see some blurry traces that are only visible if you’re looking for them.

How many Android updates will the Pixel 6 get? The Pixel 6 has run-of-the-mill battery life — it’ll last a day just fine and it might carry over into a second day for a few hours. That’s all to say that you shouldn’t expect to get high battery mileage with the Pixel 6. The iPhone 13 Pro Max and Galaxy S21 Plus — phones with similar screen sizes — both last longer.

While the Pixel 6’s battery life is fine, expectations were higher considering the phone is running a Google processor. Apple can squeeze long life from a similar battery due to optimization between iOS and Apple’s own A-series processors. That said, the Tensor processor is Google’s first, so we wouldn’t be surprised to see major improvements in future Pixels.

The Pixel 6 comes with a standard wide camera and an ultra-wide angle camera, both of which are brand new compared to previous Pixel phones that used existing  hardware year after year.

Pixel phones have always been among the best — if not, the best — phone cameras, and the Pixel 6’s cameras are excellent. That said, other premium phones like the iPhone and Samsung’s Galaxy S phones have also improved over the last few years, and the camera quality gap between the Pixel 6 and its competitors has narrowed considerably.

It can still take beautiful photos, though, like the ones below:

And low-light photos with bright objects look stunning, like this Christmas tree:

There’s some inconsistency at times, like the lighting and colors of this tree. Here’s a photo taken by the Pixel 6 of a Japanese Maple, which gets incredibly vibrant red leaves in the fall season:

The photo looks fine until you see the same tree taken with the iPhone 13, below. Some may say that the iPhone 13’s camera overly processed or boosted the photo, but that’s really how vibrant the tree looks:

The Pixel 6 is an excellent Android phone in part for its cameras, unique design, and interesting set of features. Throw the $600 price into the mix, and the Pixel 6 is easily the best phone bargain of 2022. It may not offer the exact same performance you’d get on phones that demand $800 or more, but it delivers impressive value.

Its primary rival is the $700 Samsung Galaxy S21 FE, which has a slightly more powerful processor and an extra telephoto camera lens. Ultimately, you can boil your decision between the two down to whether you want the extra telephoto lens or not. You can read more about the Galaxy S21 FE here.

Cons: Middling battery life, stuttery on some apps, camera can be inconsistent, large size isn’t for everyone