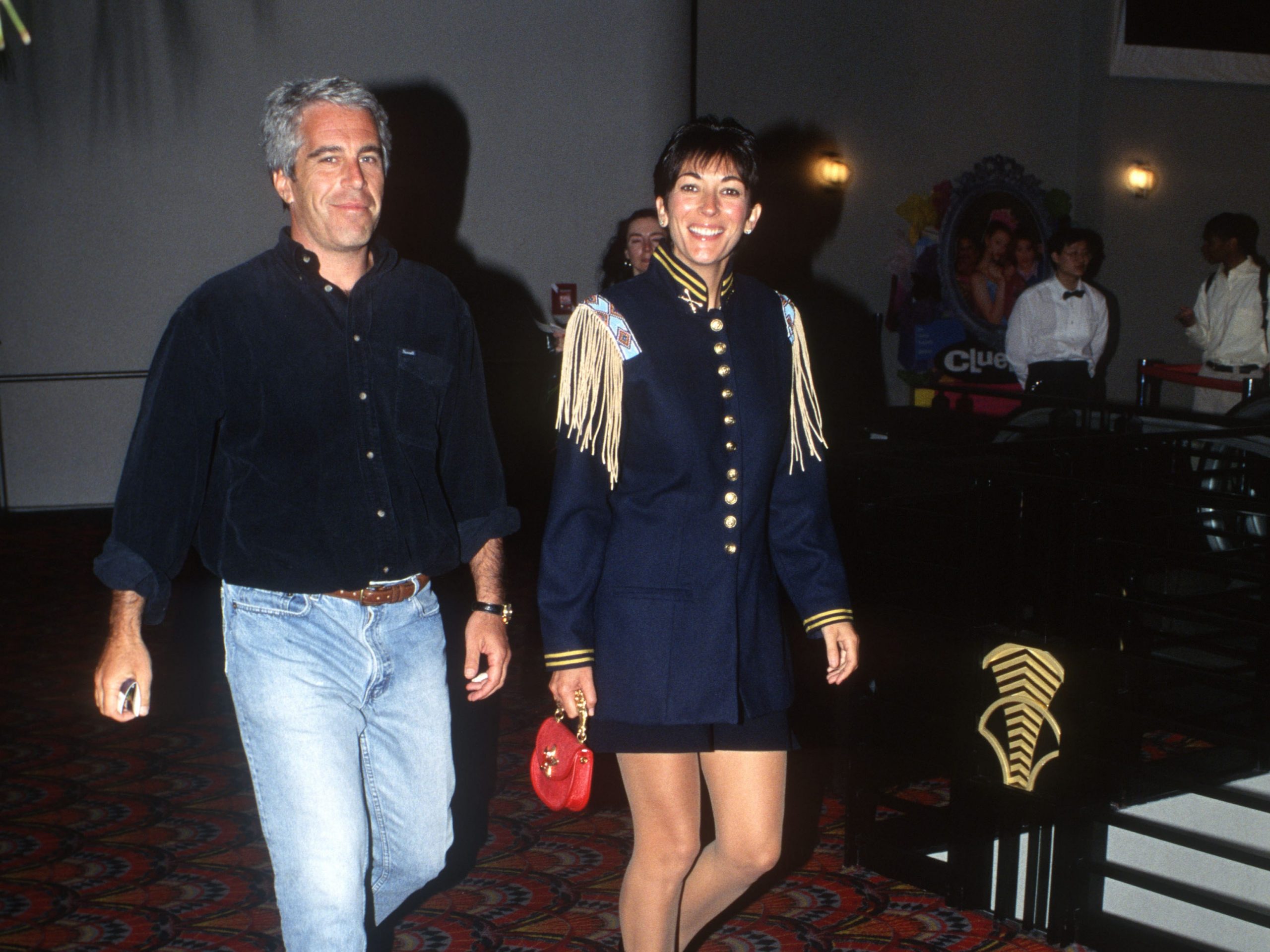 Jeffrey Epstein and Ghislaine Maxwell at an event in New York on June 13, 1995.

Nearly two years after her arrest and following conviction in December 2021, Ghislaine Maxwell was sentenced Tuesday to 20 years in prison for trafficking girls to have sex with financier Jeffrey Epstein.

Maxwell was arrested by the FBI on July 2, 2020, according to multiple reports.

The British socialite became one of the most prominent and mysterious figures linked to Epstein, who died by apparent suicide in prison in 2019 while awaiting trial on charges of sex trafficking and conspiracy.

She was alleged to have acted as Epstein’s madam, recruiting and abusing underage victims alongside the convicted sex offender. Maxwell denied these allegations.

Maxwell’s legal team did not immediately respond to a request for comment from .

Born in France, Maxwell is the daughter of Robert Maxwell, the British media mogul who mysteriously drowned after falling or jumping from his yacht near the Canary Islands in 1991.

Here’s what we know about how Maxwell’s finances.

The British socialite Ghislaine Maxwell has become one of the most prominent and mysterious figures linked to the financier Jeffrey Epstein, who died by apparent suicide in a Manhattan prison in August 2019. Maxwell was sentenced to 20 years in prison for acting as Epstein’s madam, recruiting and abusing underage victims alongside the convicted sex offender. Maxwell previously denied any wrongdoing.

Born in France, Maxwell is the daughter of the British media mogul Robert Maxwell. Robert Maxwell was a member of Parliament from 1966 to 1970 and the owner of the British tabloid the Daily Mirror.

In March 1991, months before his death, he bought the New York Daily News.

In England, Maxwell was an Oxford-educated socialite. Maxwell attended one of England’s top private boarding schools and later graduated from Oxford University. She went on to found a social club for women in London.

In 1991, Robert Maxwell died while cruising on his yacht, called the Lady Ghislaine after his daughter. His body was found floating in the Atlantic Ocean after he disappeared from his private yacht. According to The Guardian, it was ruled that he died from a heart attack combined with accidental drowning, but his daughter reportedly believed her father was murdered.

After his death, his yacht was sold to an American buyer and is now known as Lady Mona K. The 190-foot-yacht sleeps up to 12 guests in six cabins. Her father’s business was more than $4 billion in debt following his death, so Maxwell didn’t move to the US as a lavishly wealthy heiress.

The British socialite, about 30 years old at the time, quickly became a staple of the city’s high society, rubbing shoulders with celebrities, presidents, CEOs, and other members of the city’s wealthy and powerful elite.

According to a 2000 article by the New York Post, she started out in New York working in real estate and living off about $100,000 a year from a trust fund set up by her father.

Soon after she moved to New York, Maxwell reportedly began a relationship with Jeffrey Epstein. Jeffrey Epstein and Maxwell at a 2005 benefit for Wall Street Rising at Cipriani Wall Street on March 15, 2005.

According to the Post, Maxwell started dating Epstein around 1992.

Maxwell is said to have introduced Epstein to many of her high-flying friends. Donald Trump, Melania Trump (then Melania Knauss), Epstein, and Maxwell at the Mar-a-Lago club in Palm Beach, Florida, in February 2000.

Maxwell introduced Epstein to Bill and Hillary Clinton, whom she knew through their daughter, Chelsea, according to Politico. Maxwell was a guest at Chelsea Clinton’s wedding in July 2010. According to Politico, Maxwell grew close with Chelsea Clinton after her father left office.

“Ghislaine was the contact between Epstein and Clinton,” a person familiar with the relationship told Politico in July. “She ended up being close to the family because she and Chelsea ended up becoming close.”

When reached for comment by , Bari Lurie, Clinton’s chief of staff, said Clinton and her husband, Marc Mezvinsky, were not aware of the allegations against Maxwell until 2015.

A person close to Clinton told that she and her husband knew Maxwell through a close family friend, Ted Waitt, and that Clinton and Maxwell were never “close.”

Maxwell was at Clinton’s wedding only because she was Waitt’s girlfriend at the time, the person said.

Waitt cofounded the personal-computing company Gateway in 1985 and is now chairman of the Waitt Foundation, a nonprofit organization dedicated to protecting the oceans. Calvin Klein, Aby Rosen, and Maxwell at a dinner on December 3, 2009, in Miami Beach, Florida.

Maxwell is accused of approaching and recruiting girls to visit Epstein in his mansion in Palm Beach, Florida.

Until 2016, Maxwell lived in a $5 million New York townhouse bought by a company with the same address as Epstein’s business office. Tax records reviewed by show that the Manhattan townhouse was purchased for $4.95 million in October 2000 by an anonymous corporation with the same address as Epstein’s finance office on Madison Avenue.

The seller was Lynn Forester.

was unable to confirm that the seller of the home is the same Lynn Forester who has been linked to Epstein. Lynn Forester de Rothschild, the chair of the E. L. Rothschild family investment office and the wife of the British billionaire financier Sir Evelyn Robert Adrian de Rothschild, was one of the names on Epstein’s private-jet log. In October 2000, she was not yet married to de Rothschild.

Forester sold the mansion for about $8.5 million less than its assessed market value, which was more than $13.4 million. Forester bought the home in 1997 for $4.475 million, according to tax documents.

The 7,000-square-foot home on Manhattan’s Upper East Side has 12 rooms, eight fireplaces, and an elevator.

Lynn Forester de Rothschild did not respond to a request for comment from .

The townhouse Maxwell lived in is about six blocks from Epstein’s former home on 71st Street. For seven years Maxwell operated an ocean-conservation nonprofit organization, which was abruptly shut down in July. Maxwell founded the TerraMar Project in 2012 to promote conservancy of the world’s oceans.

Days after Epstein was arrested on charges of sex trafficking, the organization’s website was shut down and now includes only a statement announcing its closure: “The TerraMar Project is sad to announce that it will cease all operations. The web site will be closed … TerraMar wants to thank all its supporters, partners and fellow ocean lovers.”

‘s Áine Cain reviewed the nonprofit’s tax documents and found that it was a relatively small enterprise. No employee was ever paid more than $100,000, and most of its funds went into website development, office expenses, travel, phone and utilities fees, merchant fees, contractor fees, professional fundraising services, and insurance policies.

Maxwell reported working 60-hour weeks and pouring thousands into the organization, but by 2017 TerraMar was $550,546 in the hole in terms of revenue.

INSIDER’s Ellen Cranley recently reported that investigators were looking into the nonprofit for possible connections to Epstein.

Tax documents reviewed by show that Epstein donated $57,000 to the organization in the tax year ending in January 2013.

Through a private foundation, Maxwell has donated to various charitable organizations — including a charity for victims of sex trafficking. Maxwell in New York in September 2005.

According to tax filings published by ProPublica and reviewed by , Maxwell is the trustee of a philanthropic organization called Max Foundation Tr.

Tax filings show that in 2008, Maxwell’s foundation donated $350 to Girls Educational & Mentoring Services, a charity whose stated mission is to end the commercial sexual exploitation and trafficking of children and young women.

When reached by email, Rachel Lloyd, GEMS’s founder and CEO, told they could not find a record of the donation, noting that it was for less than $500 and that they had changed donor databases since 2008.

“We would never knowingly accept monies from anyone who was working against [our] mission,” Lloyd said. “We fully support all the victims who have been brave enough to come forward against Jeffrey Epstein and hope that they will still be able to find a measure of justice from those [who] perpetuated his crimes.”

Maxwell’s other donations through her foundation include $275 in 2011 to the Madison Square Boys & Girls Club, a chapter of Boys & Girls Clubs of America that provides after-school programs for under-resourced youth in New York City.

In 2007, she donated $300 to Hale House, a New York charity that took in homeless infants and toddlers. In 2008, Hale House ended its residential program and became a daycare service known as the Mother Hale Learning Center.

The tax filings also show that Maxwell donated $2,500 to the Clinton Library and Foundation in 2003, as well as at least $1,625 from 2003 to 2008 to the Wayuu Taya Foundation, a nonprofit focused on improving the lives of Latin American indigenous communities.

According to the tax filings, from 2002 to 2018, Maxwell’s foundation held an average of about $20,000 in total assets each year and appeared to be used to make a few small donations per year, possibly to purchase tickets to some of the fundraisers and charity galas at which she was often photographed.

Maxwell’s whereabouts have been unknown, and authorities have had trouble locating her, The Washington Post reported. The Post reported on August 11, 2019, that Maxwell was believed to be living abroad and that authorities had not been able to locate her.

A Daily Mail report from August 14, 2019, said Maxwell had been living in Manchester-by-the-Sea, Massachusetts, with the tech CEO Scott Borgerson.

However, when contacted by , Borgerson denied that Maxwell was staying at his house. He said that he had been out of the country traveling for work for the past week and that the house had been empty.

Maxwell’s legal team did not previously respond to ‘s request for comment on her location.

But after a year of laying low, Maxwell was arrested by the FBI on July 2, 2020, according to multiple reports. Her arrest comes a year after Epstein himself was arrested.